Mommy's got a hangover

Mommy's got a hangover.

What I told my youngest.

Though I hadn't been drinking last night.

But I'm in the most sour mood.

And the alternative was telling her, "I saw the future of our country go down in flames last night, honey."

I kept hoping Bernie would get at least one primary.

But the crook Hillary won them all.

Mommy's got a hangover?

The entire country's got a hangover!

But she's still the ugly War Hawk whose husband publicly cheated on her repeatedly.

It was one thing for her to stand by him as First Lady.

What would the world think of a president who allowed their spouse to cheat on them?

This is not the past.


So, if Hillary gets the nomination and then the presidency, what happens when one of Bill's affairs explodes?


Does she walk away from him?

Or does she stand on the world stage humiliated -- the leader of the free world with egg on her face?


It's a question that has to be asked considering her marriage and what she would represent on the world stage.

But she will always be a War Hawk.


Michael MooreVerified account ‏@MMFlint  7h7 hours ago
Thanks Hillary for your vote on Iraq! U & 28 other Democrats. Ah, those were the days! Bi-partisanship (pic:3/11/16) 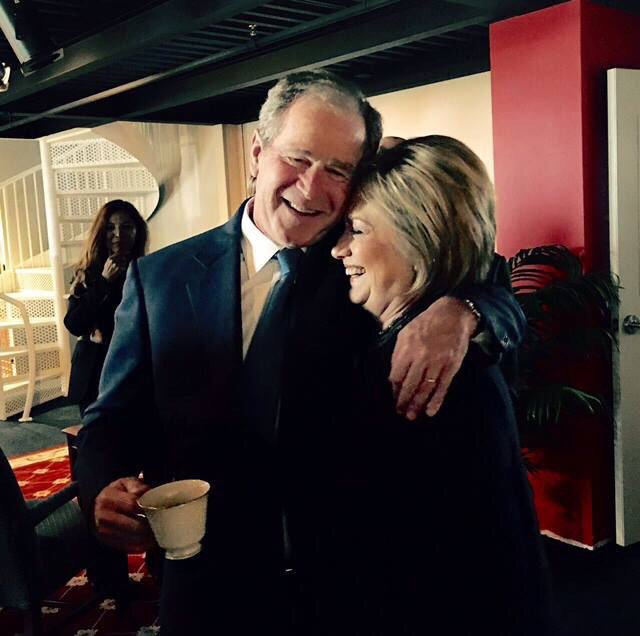 They look so happy together, her chins waving in the breeze, same breeze fluffing whatever's left of his hairline.


She showed up Monday night on MSNBC's HARDBALL to yet again lie about why she voted for the Iraq War.  Excerpt.

Chris Matthews:  Were you smart about Iraq?  Endorsing the president's position on Iraq?  Did you believe ever that Saddam Hussein -- when you had a chance to vote to authorize that war in Iraq -- did you ever believe Saddam Hussein had nuclear weapons?

Hillary Clinton:  I did.

Chris Matthews: Who told you?

Hillary Clinton: Well I know at the end of the [my husband's] Clinton administration there was a strong sense that he was reconstituting his nuclear weapons program.  And I like to remind people that at the end of the 90s there was a sense of the Congress passed that my opponent [Senator] Bernie Sanders voted for basically talking about regime change in Iraq --

Chris Matthews:  That was neocon stuff.

Hillary Clinton:  Chris, I'm just telling you.  That was the prevailing opinion.  And look, I've said it was a mistake

Hillary Clinton:  Well what was going on was a continuing intensive inspection program.  Remember Hans Blix?

Chris Matthews:  I remember it all.

Hillary Clinton:  -- because they were worried because remember, at the end of the first Gulf War, we did find evidence of a nuclear weapons program.  Then we had a number of years where we were flying a no-fly zone  over Iraq and where we saw him diverting a lot of money not just into building palaces but building, we thought, programs.

Chris Matthews:  In the fall of 2002, Dick Cheney said Saddam Hussein had nuclear weapons even though the CIA never told him that.

Chris Matthews:  No, the question is was Donald Trump right when he said they lied?

Hillary Clinton:  Well you know, I think that -- What Mike Hayden and others have said was an intelligence failure.  Now I don't know --

Chris Matthews:  Yeah but they never said they had nuclear weapons.  How could it be a 'failure'?

Hillary Clinton:  They led some people to believe that --

Chris Matthews:  Yeah, but not with evidence. You didn't have evidence did you?

Chris Matthews:  You never had evidence of nuclear weapons.

Hillary Clinton:  No.  But that was because the inspection program had not been completed and where I stood was I believed George W. Bush when he said we are going to let the inspectors finish the job.  This vote will give me the leverage, he claimed, to make sure that happens.  Read Hans Blix's book --

Chris Matthews:  Why did you trust George W.?

Hillary Clinton:  Well, you know, I-I thought that using diplomacy -- which seemed to me was what he was offering -- made a lot of sense.

She can only lie, that's all she has to offer.

She never objected when Bully Boy Bush refused to let the inspectors finish their job.

How stupid do you have to be to get tricked by George W. Bush?

How stupid do you have to be?

The fool here would be Hillary Clinton.

If that's how she wants to play -- tricked by the idiot Bush -- then she's the fool.


Michael Moore noted the Iraq section of the interview.

There was much more to the HARDBALL interview.  Philip Weiss (MONDO WEISS) notes:


Francesca Chambers (DAILY MAIL) notes another aspect of the interview:

Hillary Clinton claimed during a town hall that its unfair to compare her vote for the Iraq War to her support for forced regime change in Libya because 'we didn't lose a single person' in the latter country.
The statement ignores the terrorist attack on the U.S. consulate in Benghazi, Libya, on September 11, 2012 that killed four Americans, including American Ambassador Chris Stevens, while she was secretary of state.
Clinton's regime change record came up during an interview with Chris Matthews yesterday evening on MSNBC in the context of the Democratic presidential race and Bernie Sanders' opposition to U.S. involvement in both conflicts.
The four Americans known to be killed* were Sean Smith, Tyrone Woods, Glen Doherty and Chris Stevens.
*Known to be killed?
Hillary has offered Congressional testimony of meeting with other victims of the attack in a military hospital and some of them dying.
It's Congressional testimony -- in an open forum -- and no one ever wants to question her on that.
Even though she's a serial liar who repeatedly gets caught lying.
Her latest lie ("we didn't lose a single person") has generated strong responses such as this Tweet:

Over at David Brock's Bordello, professional whores Tyler Cherry, Nick Fernandez and Bobby Lewis try all forms of positions to try to make believe Hillary was not forgetting Benghazi, just speaking of the conflict.


David's service boys should close their mouths and legs and probably bathe in something stronger than soap to get rid of the crabs.

They're lying and whoring.

Reality, Barack didn't put US boots on the ground in the battle.

So her self-praise that "we didn't lose" a person in Libya?


Her concern should be with the people of Libya.

She supported war on Libya and she should be concerned about what the support brought.


As for her little whore David Brock, no one believes a word that comes out of David Brock's Bordello.


And not everyone is as quick as Brock to strip off their ethics.

Today, the US Defense Dept announced/bragged:


Strikes in Iraq
Rocket artillery and attack, fighter and remotely piloted aircraft conducted 14 strikes in Iraq, coordinated with and in support of the Iraqi government:

Task force officials define a strike as one or more kinetic events that occur in roughly the same geographic location to produce a single, sometimes cumulative, effect. Therefore, officials explained, a single aircraft delivering a single weapon against a lone ISIL vehicle is one strike, but so is multiple aircraft delivering dozens of weapons against buildings, vehicles and weapon systems in a compound, for example, having the cumulative effect of making those targets harder or impossible for ISIL to use. Accordingly, officials said, they do not report the number or type of aircraft employed in a strike, the number of munitions dropped in each strike, or the number of individual munition impact points against a target.

The Iraq War started under Bully Boy Bush continues under Barack Obama and would continue under Hillary Clinton.