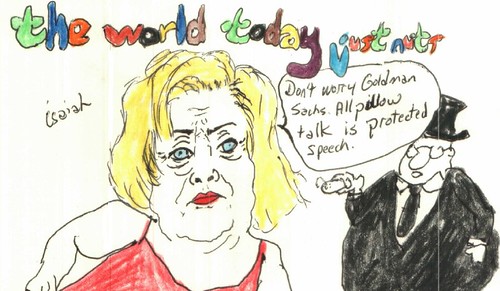 I love that comic.


That's where her corporate speeches are.


That's why she won't release them.


She's stroking their egos to justify the money they're paying her.


She's the hooker, Goldman Sachs, et al are the johns.


And that's why she won't release the transcripts of these speeches.

Monday, April 18, 2016.  Chaos and violence continue, Barack will be sending more US troops into Iraq, Moqtada's followers protest in Baghdad, and much more.


Last week, US Secretary of Defense Ash Carter announced the plan to put more US troops on the ground in combat.  He was speaking in generalities.

Today, he offered specifics from Baghdad, after sneaking into the country of Iraq early this morning.


Euan McKirdy, Jim Sciutto and Jamie Crawford (CNN) report Carter announced 217 more US troops would be sent into Iraq "which will raise the U.S. troop presence in Iraq to more than 4,000."  In addition, the US "will also offer aviation support and provide force protection, Carter said, during an unannounced visit to Iraq.  The U.S. will additionally provide Army Apache attack helicopters -- something the U.S. had been pushing for months in the face of resistance from the Iraqi government."

The additional 217 troops are the latest in a series of incremental additions to the U.S. military effort in Iraq. MacFarland left the door open to the possibility that even more U.S. troops would be sent to Iraq if the new additional forces prove "insufficient" to defeating the Islamic State group in Mosul. If that happens, "we'll have another discussion about it," he said.


McFarland is the top US commander in Iraq.

And the number just keeps slowly moving upward.  No one's supposed to note that.

For Iraqi officials, the thing that will get the most complaints about the new deal will be the aspect that includes the Kurds.  BBC NEWS explains:


The US also plans to give Kurdish Peshmerga forces, which are fighting IS on the ground, more than $400m (£280m; €350m) in assistance.
Co-operation between the two forces was evident on Monday when Kurdish officials said they had killed a senior IS commander in the south of Mosul in a joint raid with US special forces.

Though the issue of joint raids did not come up today, the issue of aid to the KRG did at the State Dept briefing moderated by John Kirby:


QUESTION: Thank you. So Secretary Carter was in Baghdad today and he said – he decided that there will $415 million for the Kurds for the Peshmerga. Was the State Department involved in the process of making this decision?


MR KIRBY: We were certainly – there was a great deal of interagency coordination that was done in the – in arriving at this decision. And we’re fully supportive, of course.


QUESTION: Okay. And another question. The State – the Department of Defense says these funds will be provided by – with – through the Government of Iraq. This is money; it’s not weapons. I just want to know factually whether the – physically the money goes through a bank account in Baghdad and then to Erbil, or how’s that work?


MR KIRBY: I have no idea how the actual funds get released and transferred, but everything – you speak about it as if it’s something so unique. It all goes to assistance that the United States is providing to the Government of Iraq as it conducts a campaign plan against Daesh inside their country. And as we’ve said before, everything, all our aid and assistance, will continue to go through the government, the central government of Iraq in Baghdad. Now, exactly how the electrons gets transferred and the actual dollar figures, I don’t have that level of specificity, and frankly, it’s not relevant. Everything is being done in coordination with Prime Minister Abadi’s government.


MR KIRBY: Well, I would – if you need to know that specific about – information, I would refer you to DOD. I simply don’t have that level of information.


QUESTION: And will it – sorry, one more.


QUESTION: Just a factual question. Will you send the money in cash as you had after 2003? Because that’s what you did.


MR KIRBY: You really need to talk to DOD. I don’t have that level of detail. This was an announcement by the Defense Department, and I refer you to them for more detail about it.


QUESTION: It’s important, really. Once the money is sent in cash, it can get around to different destinations than the one that you intend.

MR KIRBY: I honestly don’t know the answer to your question. You really should go to DOD for that level of detail on that.

Kirby claims, "We were certainly -- there was a great deal of interagency coordination that was done in the -- in arriving at this decision. And we’re fully supportive, of course."  Yet asked a basic question, he's so clueless, he rushes to defer to the Defense Dept.


That tells you how little State actually was involved in the decision process.

US 'boots on the ground.'


And, of course, June 14, 2014, US President Barack Obama declared, "American forces will not be returning to combat in Iraq, but we will help Iraqis as they take the fight to terrorists who threaten the Iraqi people, the region, and American interests as well."

So many broken promises.

So many broken promises.

Remember when this started with 300 or so US 'advisors' and Tom insisted we must fight against creeping escalation?


Today, his only concern is serving on the DNC (which is most likely why he endorsed Hillary last week).

He has nothing to say about the escalation in Iraq.

He's just a tired old sell-out.  Pock marks of the soul, indeed.  Those confused should refer to David Walsh's WSWS piece from 2011 on the old sell-out:

Hayden, in short, personifies a certain strand of American middle-class left politics, by this time a fundamentally conservative and establishment strand.
In relation to Obama’s Afghanistan policy, Hayden enters stage “left” to reinforce the illusions sown by the president and shore up support for the administration. His piece is aimed at smothering the outrage felt by those who believed candidate Obama’s promises in 2008. Hayden’s method of choice is to congratulate antiwar voters and activists on having supposedly forced the current administration’s hand in “quickening” the Afghan withdrawal.
Thus, Hayden asserts that Obama “is responding to massive public pressure for rapid troop withdrawals from Afghanistan.” He declares, “We have crossed the line into de-escalation.”
The Nation journalist goes on to claim that the scheduled withdrawals by the end of 2012 (which, of course, can be vetoed or altered by the military) should make opponents of the war “feel a sense of gratification…about contributing to the vast upswelling of public opinion against Iraq and now Afghanistan… There is a magic about public opinion, which still matters despite the shadows of authoritarianism all around.”

Hayden’s cynical article is a succession of attempts to wear down popular skepticism and anger about Obama’s Afghanistan policy.


The incremental U.S. troop growth is more of a White House strategy to wage war on the cheap --especially in a conflict that Obama hailed when all U.S. troops finally came home at the end of 2011. Sen. John McCain, the Arizona Republican who chairs the armed services committee, called the latest deployment “the kind of grudging incrementalism that rarely wins wars, but could certainly lose one.” It has led to a fingers-crossed kind of fight, with the U.S. seeming to dispatch only sufficient force to handle an immediate need, until it’s no longer adequate—and then sending more. This tendency has generated ire among some U.S. military commanders, but the top brass has gone along with Obama’s desire to keep the U.S. military footprint in Iraq as small as possible.
“Back in Vietnam days, we called this ‘gradual escalation’—a euphemism for trying harder when you don’t know exactly what you’re trying to achieve,” says Andrew Bacevich, a retired Army colonel and author of the just-released America’s War for the Greater Middle East: A Military History. “The approach failed then, but Obama appears determined to revive it.”

And Barack appears to be facing no real opposition.

The US Defense Dept announced today:

Strikes in Iraq
Fighter, ground attack and remotely piloted aircraft conducted 17 strikes in Iraq, coordinated with and in support of Iraq’s government:

-- Near Fallujah, a strike struck an ISIL tactical unit.

-- Near Sinjar, a strike suppressed an ISIL tactical unit.

A great deal of time by Barack is spent propping up Haider al-Abadi, the latest exile that the US has installed a prime minister of Iraq.  Currently, Shi'ite cleric and movement leader Moqtada al-Sadr is putting pressure on Parliament for them to approve Haider's new nominees for a new Cabinet.  But that pressure could easily flip and turn against Haider.  AFP's W.G. Dunlop Tweets:

Thousands held a sit-in on Monday near the heavily fortified Green Zone, which houses the parliament and government offices, in support of Sadr's warning to the politicians.

"We're waiting for what Sayyid Moqtada will say tomorrow,'' when the deadline the cleric gave is up, said one of the demonstrators.


Remember all the hand wringing about others using child soldiers?  Not the brave west, of course, but others?

Well while the US was lecturing, their partner the United Kingdom appears to have been sending child soldiers into Iraq.  Alice Ross (GUARDIAN) reports:


A former senior director at a British firm says that it employed mercenaries from Sierra Leone to work in Iraq because they were cheaper than Europeans and did not check if they were former child soldiers.
James Ellery, who was a director of Aegis Defence Services between 2005 and 2015, said that contractors had a “duty” to recruit from countries such as Sierra Leone, “where there’s high unemployment and a decent workforce”, in order to reduce costs for the US presence in Iraq.

ADS had contracts in Iraq to protect US bases.


Lastly, activist and Academy Award winning actor Susan Sarandon is Marc Maron's guest on this week's (not safe for work unless you're using headphones) broadcast of WTF.  Susan was also on THE CHARLIE ROSE SHOW with actress Rose Byrne and director Lorene Scafaria -- Susan and Rose star in Lorene's THE MEDDLER.  The film opens in New York and Los Angeles this Friday and then goes into wide release.  Susan and Rose are wonderful and Casey Wilson fans should also be sure to check the film out.