Silent All These Years

"Silent All These Years."

That was the first song by Tori Amos, I ever heard.

I loved her piano playing.

And I loved her singing.

But mainly I loved the lyrics.

I won't go through the whole song but here's some of the lyrics.

Excuse me, but can I be you for a while

What a great opening.

My dog won't bite if you sit real still
I got the Anti-Christ in the kitchen yellin' at me again
Yeah, I can hear that

And what powerful images, right?

Been saved again by the garbage truck
I got something to say, you know, but nothing comes
Yes, I know what you think of me, you never shut up
Yeah, I can hear that

In every bad relationship, someone gets told they can't shut up.

That was me with the father of my kids.

But what if I'm a mermaid, in these jeans of his with her name still on it
Hey, but I don't care 'cause sometimes, I said sometimes I hear my voice.
And it's been here silent all these years

Again, I love her imagery.

I loved that always.

Boy, you best pray that I bleed real soon -- meaning, you better pray I get my period.


I just love that song.

It's from her LITTLE EARTHQUAKES album which didn't have a bad or even just okay song on it -- every song was pretty much a masterpiece. 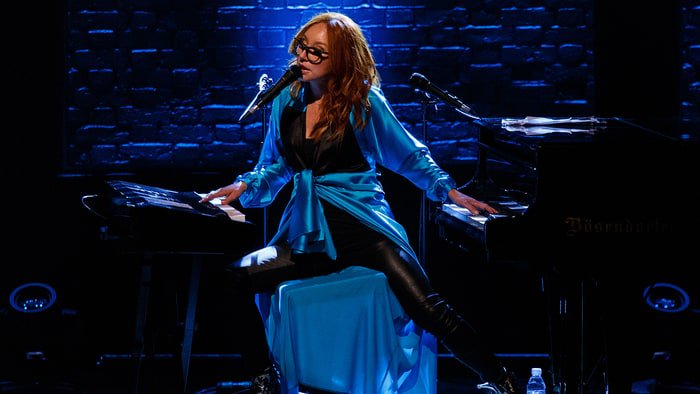 
Starting with the Academy Awards.  Proving that the whore of the press have no claim to respectability or honesty, Anna Lewis (COSMOPOLITAN) types, "Warren Beatty, who was presenting the award with Faye Dunaway, read out La La Land, [. . .]"

Warren did not read out any winner.

He gave an exasperated look and handed Faye Dunaway the envelope and she searched what was written and then declared LA LA LAND.

What took place was the Academy's fault.

It was not Faye's fault and it certainly wasn't Warren's.  (As long disclosed here, Warren is a personal friend and I'll be damned if the press is going to get away with lying about him.  Which is why, late last night, I made a point to weigh in on this with "The press lying never ends.")

It is the Academy's fault, it is PricewaterhouseCoopers' fault.

Let's quote the statement from the accounting firm:


The presenters had mistakenly been given the wrong category envelope and when discovered, was immediately corrected. We are currently investigating how this could have happened, and deeply regret that this occurred. We appreciate the grace with which the nominees, the Academy, ABC, and Jimmy Kimmel handled the situation.

As I said last night, Warren and Faye were handed the wrong envelope.

And PwC is present to prevent this from happening.

Brief history, true or not, Bette Davis always claimed she was supposed to be nominated for OF HUMAN BONDAGE and her name was inadvertently left off the ballot that year and, as a compromise, voters were allowed to write in a nominee for Best Actress in the voting round.

The year after, what is now PwC took over the ballot counting.

She claimed it as a victory.

In the seventies, when Barbra Streisand was up for an Academy Award for composing "Evergreen" her friend Neil Diamond, who was already announced to present the award for Best Song, joked that he'd announce Barbra regardless of who won.

Though he was only joking, a few people got bent out of shape and the Academy had to clarify that the accounting firm's representatives were on hand at the ceremonies to ensure that something like that never happened.

In the 90s, an actress won and Charlie Sheen and others spread lies that she wasn't supposed to win, that her name was called by mistake.  PwC could have stepped forward to end that rumor but they did not.  The actress won the award (and deserved it).  I'm not reprinting her name here because this vicious lie should have ended long ago.

As I said last night, I don't know what made the TV screens.

I do know what happened in the auditorium.

As people came on stage from LA LA LAND to accept, a friend leaned up (seated on the row behind me) and asked, "What's Warren doing?"

I had no idea.

But he was speaking to everyone on the stage, some of whom dismissed whatever he was saying.

What he was doing was attempting to stop the acceptance speech because he knew the envelope they'd been given wasn't for Best Picture.

If anything, he's to be thanked.

The show would have ended without the correction if Warren hadn't stepped up and done the job that the Academy was apparently too cowardly to do itself.

Warren didn't do anything wrong and saved the ceremonies because we'd otherwise be reading this morning, "Day after handing out trophies, Academy announces Best Picture winner didn't really win."

The press needs to get their facts right and they need to quit lying.

Donald J. TrumpVerified account@realDonaldTrump
For first time the failing @nytimes will take an ad (a bad one) to help save its failing reputation. Try reporting accurately & fairly!
187 replies515 retweets1,847 likes

Sweetie, a nice rack carries you only so far.

That wasn't the first time they lied or the last.

Paul Newman voted Democrat, but he wasn't a partisan.

But then, unlike Alyssa, Paul was educated and he was informed.

Alyssa Milano Retweeted CNN International
You can and should watch this right now on Netflix. #WhiteHelmets #oscars

You can and should be aware that this is a propaganda film.

These are the Oscar-winning #WhiteHelmets: "Life-savers" one minute, Al-Qaeda terrorists the next. #Oscars

With their victory for "Best Documentary", the #WhiteHelmets become the very first terrorists to ever win an Academy Award Congrats! #Oscars

"Congrats" to Al Qaeda and its masterful propaganda front, White Helmets, for winning at the #Oscars

, which must be renamed to the Orwells.

Even the propaganda of attending is problematic.  GUARDIAN says Syria's the reason for the no show and publishes a statement where the filmmakers said the same thing.  Woops.

And a view from Iraq.

A documentary legitimising Al-Qaeda's firefighters just won at the #Oscars

The Iraqis fighting ISIS in Iraq?

They don't support ISIS in Syria.

As AL MANAR reports this morning:


The Iraqi Foreign Minister Ibrahim Al-Jaafari stated on Monday that his country intends to fight ISIL in Syria on the basis of protecting the Iraqi territories from the threats of the terrorist group, not interfering in the Syrian affairs.
Al-Jaafari told the Russian news agency that the Iraq forces will strike the terrorists within the Syrian territories in case they pose an extended threat against the Iraqi territories.

And it is the same organization.


And today there may be a change in US policy but most likely it will be the same.

We'll find out around mid-day.

But for now, it remains the same as it's been since August of 2014:  send in more US troops and bomb the country.

If there was a point to that, it was to create space for political reconciliation.

Only the latter didn't take place.

In that regard, it was like Bully Boy Bush's "surge."

Iraq was in trouble politically and security wise.

To improve security with US troops allowing the Iraqi politicians to focus on the reconciliation.

And judging by what's going on now?

It probably never will with the current players.


The rise of the Islamic State was facilitated by sectarian tensions among Iraq’s majority Shiite and minority Sunni and Kurdish populations, and in particular by the discrimination against Sunnis by a Shiite-led Baghdad government backed by Iran. After the fall of Mosul in 2014 the Obama administration helped to engineer the removal of Prime Minister Nouri al-Maliki, who fomented the sectarianism, and his replacement by the more moderate Haider al-Abadi, who pledged to build a more inclusive regime. Mr. Abadi’s good intentions have mostly been thwarted by sectarian hard-liners, including Iranian-controlled Shiite militia groups.

Consequently, the military offensive to recapture Mosul has gone ahead without accompanying political steps that might strengthen moderate Sunni leaders against militants who will seek to perpetuate an insurgency against the Baghdad government. A report this month from the Institute for Study of War warned, “Early indicators suggest that a post-ISIS Sunni insurgency may be forming in Iraq and al Qaeda (AQ) is trying to gain traction within it.” It said, “the U.S.-backed Coalition has been focused only on eliminating ISIS, not other insurgent groups or the conditions that grow them.”

But Wong is hampered by the facts and we see why HUFFINGTON POST can't be seen as a news outlet -- there is no fact check.

By the time the efforts towards creating SAHWA were started, that money was exhausted.


Claiming that this was what was being used for Sahwa devalues all the work done by, among others, US House Rep Ike Skelton and US Senator Barbara Boxer.


In fact, it was Boxer who forced Sahwa off the US taxpayer dime. (see the April 8, 2008 snapshot, some of us weren't sleeping).

But apparently Pui Hang Wong doesn't need to know anything to write because at HUFFINGTON POST you can just make up things and get away with it.


Nothing's changed.  Not even the justice system has improved.