Mark Ruffalo‏Verified account @MarkRuffalo 7h7 hours ago
Mark Ruffalo Retweeted VANITY FAIR
Sorry, until George W. Bush is brought to justice for the crimes of the Iraq War, (including American-lead torture, Iraqi deaths & displacement, and the deep scars—emotional & otherwise—inflicted on our military that served his folly), we can’t even begin to talk about kindness.
Mark Ruffalo added,
VANITY FAIRVerified account @VanityFair
For decades, Ellen DeGeneres has been the sunny representative for a brighter world we might all live in if we were kinder to one another. But that imagined utopia seems increasingly out of touch with reality http://vntyfr.com/IloZskH
10,486 replies44,277 retweets195,132 likes

And thank you, Susan Sarandon!!!!

Thank you to so many who have said, no, we don't 'be kind' to War Criminals.

saira rao‏Verified account @sairasameerarao 15h15 hours ago
GW Bush is every white man who has committed unspeakable crimes and walks away as the all American hero. Ellen DeGeneres is every white woman who makes it possible.
161 replies1,657 retweets7,223 likes

Mey Rude has a great column at OUT.  How do I know it's great?  My brother, C.I. and my best friend from high school all e-mailed it to me.  I knew it was going to be something and when I read it, I was not disappointed:


Being kind to someone and being friends with them is not the same thing. You can be polite and not call George Bush a “war criminal” or a “bigot” to his face — that seems like a wasted opportunity to me, but hey, to each their own — but you don’t have to celebrate spending time with him. I’m a queer, transgender Latina in a same-sex relationship; I don’t have time to be kind to members of groups that are actively trying to kill me or kick me out of the country. Bush pushed policies that the GOP is still using to attack and demonize people like me today.
As a queer woman, DeGeneres once served as an example of what my dreams could look like. When I first came out in 2012, I had one of her and Portia’s wedding pictures as my computer background. I wanted to be as happy and fulfilled as she was. However, it’s increasingly difficult to reconcile that image with someone who has used their wealth and fame to be an apologist for people who attack, mock, and deride our community. When Kevin Hart stepped down from the Oscars after a series of anti-LGBTQ+ tweets resurfaced, she didn’t just defend him. DeGeneres, one of my lesbian heroes, gave him a platform on her show — a stop on his redemption tour.
Today I find myself asking: Does Ellen Degeneres still represent me? Where is she when Black trans women are murdered? Where is she when the same Republican party her friend represents is trying to make it legal to fire someone for being LGBTQ+? Why has she spoken out more about her friendship with Bush this week than our community’s basic civil rights? Is she even relevant to me at all?
When I think about what it means to be a queer woman in 2019, I’m thinking about fighting against TERFS and the Republican party (I guess DeGeneres never got that memo), finding doctors and therapists who will treat me with respect, talking about True Crime with my friends and spending time with my girlfriend. I think about Steven Universe, Hayley Kiyoko, Janelle Monáe, She-Ra, and Kristen Stewart. When I think of queer women named Ellen, I don’t think of Ellen Degeneres. I think of Ellen Page.
It would be nice to say that I should've known that a cis, white, extremely rich lesbian wouldn’t represent me, especially as she got even more rich, but it was harder to find role models for someone like me back then. It’s been 22 years since she came out, and honestly, I don’t think I want Ellen DeGeneres to represent me anymore. I’m not sure she ever really did.


Starting with the topic of yesterday's snapshot, Ellen DeGeneres.  A community member e-mailed to note that she had to live with Don't Ask, Don't Tell while she was serving in Iraq.  She notes, "I'm not an Obama groupie, but if Ellen went to a football game with Mr. Obama, fine.  He was President when Don't Ask, Don't Tell was repealed.  Contrast that with the Bully Boy Bush who oversaw eight years of it.  And contrast that with do nothing Ellen.  She had a high profile and a daily talk show and she didn't do a damn thing to help Don't Ask, Don't Tell get overturned.  When it was overturned, she was quick to get her press agent to supply quotes to every outlet.  She was quick to play glory hog.  She had done nothing to help those of us who served -- gay or straight -- and she has done nothing to help the average American -- gay or straight.  Be kind?  She has a lot of rules about kindness that allow her to be kind to a War Criminal but none of her 'be kind' rules apply to the average person."  That member will be part of this week's roundtable for the gina & krista round-robin and we'll be addressing that topic and others.  (Inboxes Friday morning.)

Sarah Abdallah Retweeted Daily Caller
Just Ellen Degeneres hanging out with her buddy George W. Bush who slaughtered over a million human beings by launching an illegal war against #Iraq on a pack of lies. How adorable.
Sarah Abdallah added, 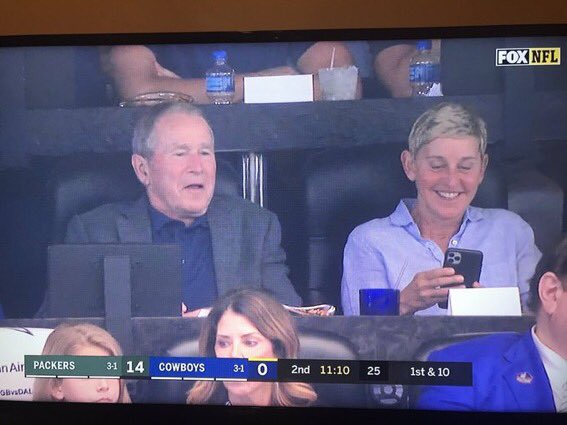 In the most ridiculous (or whorish? maybe she wants to be on Ellen's show?) moments around this, 1% candidate Tulsi Gabbard Tweeted and was Tweeted back.

.@TheEllenShow msg of being kind to ALL is so needed right now. Enough with the divisiveness. We can’t let politics tear us apart. There are things we will disagree on strongly, and things we agree on — let’s treat each other with respect, aloha, & work together for the people.
/>

Something tells me @mtracey will pretend he didnt see this.
1 reply0 retweets64 likes

Dude, what has happened to Tulsi. Thought she was a progressive. Backing off M4A and now not standing true on the one thing that is HER issue of unjust wars. This and Yang saying Dr. Oz helped people understand health.... I'm done with them both.
3 replies0 retweets15 likes

Replying to @TulsiGabbard @TheEllenShow
Honestly, I thought you'd be less charitable to the man who tricked you into going to war.
8 replies10 retweets256 likes

It makes me wonder, as do many things she says, whether she is being honest. I'm leaning more and more heavily towards: "no, no she isn't."
2 replies3 retweets57 likes

I like Tulsi. I don't love her take on this. Maybe she thinks this is a stance against cancel culture. I disagree with that.
5 replies0 retweets16 likes

It was the CUFI appearance earlier this year, and her endearing welcome to Modi that caused me to stop confusing my desired perception of Tulsi with what seems to be the person she is unfolding before us.
0 replies1 retweet17 likes

Tell that to the survivors of the one million dead still awaiting justice.
0 replies10 retweets153 likes

Replying to @TulsiGabbard @TheEllenShow
Love you Tulsi & everything you spread in the name of aloha. Yes we should be kind to people we disagree with but there’s a line to be drawn. A lot of us who’ve seen the suffering with NO accountability, understand there must be a limit. War crimes are those limits.
21 replies31 retweets405 likes

The man is a war criminal and she wants us to forgive and be civil with him. I just don’t know how she make make it I CANT
8 replies3 retweets75 likes

I’m not surprised. She’s about taking to everyone even those we hate. I get her ideology is strong on that, I don’t agree with it. But Bush is an ex US POTUS, he’s not been held accountable and he should. We must draw limits.
4 replies1 retweet24 likes

She’s saying nothing about Bush she’s talking about Ellen’s response. And if we are going to attack her we should go after every politician bc every single one has this attitude.
1 reply0 retweets5 likes

And I will go against any politician that do this even if is Bernie. Sorry but this was the last drop for me with Tulsi. I tried to give her the benefit of the doubt several times but now i can’t trust her anymore.
3 replies1 retweet7 likes

You can ride high atop your pony
I know you won't fall
Cause the whole thing's phoney
You can fly, swingin' from your trapeze
Scaring all the people
But you never scare me
-- "Bella Donna," written by Stevie Nicks, first appears on her album BELLA DONNA


She has so much concern, Tulsi does, for the War Criminals and War Hawks.  We see that over and over from her.  No 'aloha' for the Iraqi people, none for the ones who have suffered, not even any recognition of that reality.  Tulsi has been nothing but hype from day one and the only good thing about her being on stage in this month's debate is that every time she opens her mouth she exposes herself a little more.

In Iraq, protests have taken place for days.

For the past 6 days of civil protest, Iraqis have been falling wounded in the rate of 42 people an hour and a total of 6100!!! Why are the global organizations silent???! Share this and raise awareness of what is happening , these are unarmed kids against fully auto weapons #Iraq

Iraq has been plunged into a new cycle of instability that potentially could be the most dangerous this conflict-scarred nation has faced, barely two years after declaring victory over the Islamic State group in a war that left much of the country in ruins and displaced tens of thousands.
The latest bloody confrontations have killed more than 100 people in less than seven days. But this time, the clashes do not pit security forces against Islamic extremists, the country’s Sunnis against Shiites, or insurgents against occupation forces.
Instead, Iraqi security forces have been shooting at young Iraqis demanding jobs, electricity and clean water — and an end to corruption.

This morning, REUTERS maintains, "Iraq had its calmest night since anti-government protests began more than a week ago over corruption and unemployment."  They fail to note the public condemnation from elected officials in Iraq of the violence the security forces have unleashed on the protesters, but REUTERS does include this:


It was an embarrassing response from the US government and the Iraqi government has released the read out as a fig leaf cover of their own actions.


Here's a variety of Tweets on the protests:

Shaun Rein, Founder of CMR @shaunrein
So let me get this straight. It's ok for HK rioters to destroy Starbucks & other food outlets because the daughter of Maxims founder denounced rioting, but it's not ok for mainlanders to boycott Rockets & NBA…
0 replies0 retweets0 likes 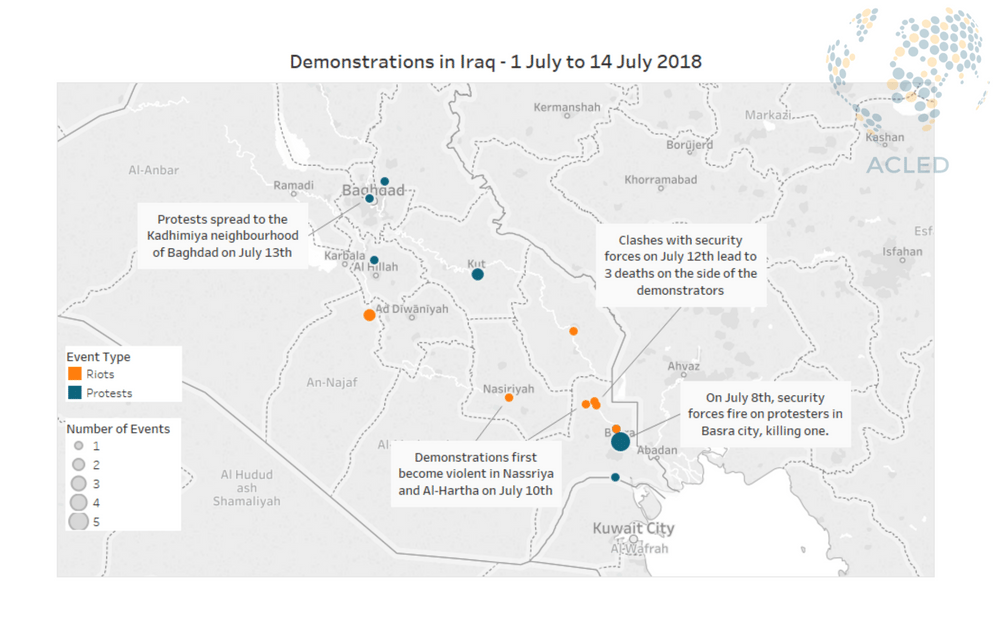 
‘Just Give Us a Country’: Thousands in Iraq Protest Corruption
0 replies0 retweets0 likes 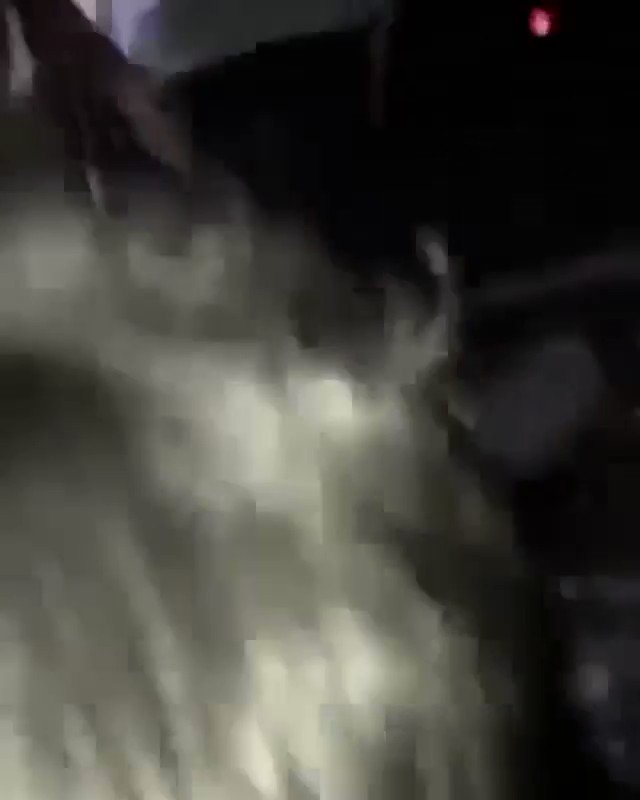 As the regime in #Iran seeks to quell the anti-mullah protests in #Iraq, people in different cities inside Iran are also rising in protests. #IranProtests
0 replies0 retweets0 likes

INBOX — The U.S.-led counter-ISIS mission is still noticing Iraqi Security Forces actions in Iraq from the last week, even amid the protests, and including one in Baghdad on Oct. 1. (The day the first, smaller protests began.)
0 replies2 retweets2 likes 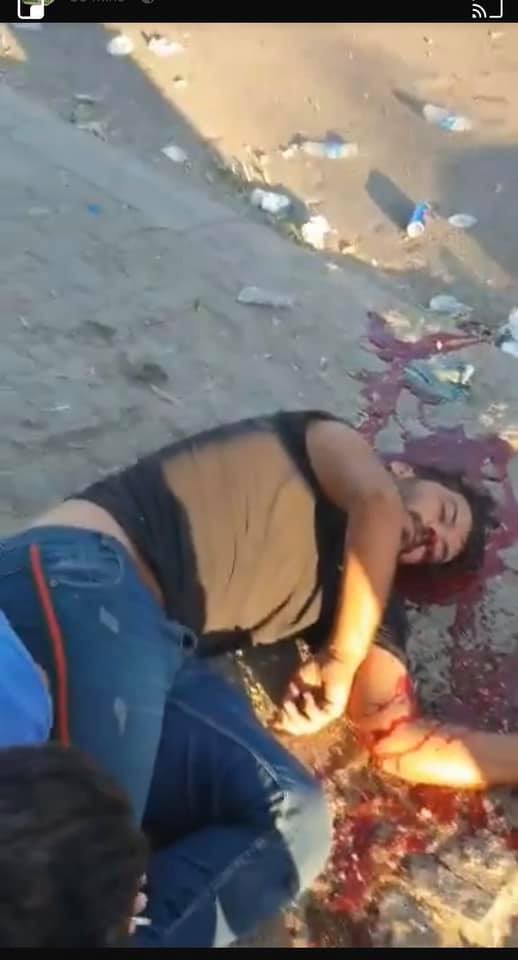 IRAQ- At least 165 people have now died in the crackdown on Iraq’s anti-government protests, according to a source in the health ministry. @leloveluck #Save_the_Iraqi_people #Baghdad