"Magic Mike."  This is a great movie.  I almost didn't see it.  Not because I thought, "Scandalous!"  I was all up for seeing it. But it wasn't one I'd take my kids to and I had to factor that in.  They had a last minute outing with friends Sunday night and I offered to help out but there were two parents already in charge of transportation.

So I asked Ty and his boyfriend if they wanted to see it and we all went.  It was a great film.

You already know Channing Tatum is one of my favorite actors.  I really did not care for him for many years.  Then I heard C.I. and others praising him and gave him a chance.  He is a good actor.  And he's demonstrated that in several films now. 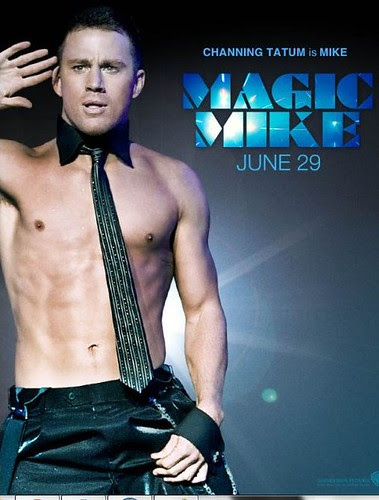 "Magic Mike" seems like it's going to be on the level of "A Night In Heaven" or "American Gigolo" and sort of be embarrassed about its topic.

That's not the case here.

They explore the topic and much more.

What I really liked was how visuals explained so much.

When Channing and others are in their day-to-day lives, the colors of the scenes are kind of washed out.  When they hit the strip club, everything is crisp and vibrant and you see why they'd be attracted to it.  For the money, for the women and for the excitement.  It provides a real kick to their lives.

And it's an exciting film.  There's so much life to it.  In fact, if Steven Soderbergh (director) is really serious about packing it in after his next two films, I'd argue he owes us a third film because he's never directed a musical before (the Librace biopic won't count nor does "Magic Mike") and after what he's done here, he might be one of the few who could actually handle a real, honest to God musical like the movies used to offer all the time before I was born.

Prashant Rao ‏@prashantrao
Competing #Iraq death tolls for June: AP - 234; Reuters - 237; AFP - 282; UN - 401; Iraq Body Count - 472. Government figure? 131.
Collapse
12:31 PM - 1 Jul 12 via TweetDeck · Details
Prashant is the Baghdad Bureau Chief and clearly he was aware of the other numbers.  He could include them in a Tweet.  One wonders why AFP wasn't able to include them in an actual news article?  Sunday Margaret Griffis (Antiwar.com) reported her outlet's count: 544.
Of course, a month with over 400 deaths?  That doesn't imply the Iraq War is over, does it?
My name is Penny Evans and I've just gone twenty-one
A young widow in the war that's being fought in Vietnam
And I have two infant daughters, I thank God I have no sons
Now they say the war is over but I think it's just begun
-- Melanie's version of "The Ballad of Penny Evans" used as an intro to "Peace Will Come (According to Plan)"
Now the death tolls?  Not a new issue.  And in April, Joel Wing wrote a great article for AK News about the Iraqi government undercounting:

In February 2012, the Iraqi government released its official figures for casualties from April 2004 to the end of 2011. It had over 69,000 deaths for that time period. That count was 30,000 less than other organizations that keep track of violence in Iraq. During the height of the civil war, the country's ministries' numbers were comparable to other groups, but since 2011 they have consistently been the lowest. While some Iraqi politicians have claimed that the official counts miss many deaths, it could also be argued that the statistics are being politicized by the prime minister who controls all of the security ministries.
On February 29, 2012, Iraqi government spokesman Ali Dabbagh announced the government's numbers for deaths in the country. He said that from April 5, 2004 to December 31, 2011 69,263 Iraqis were killed. 239,133 were also wounded. The deadliest year was 2006 when there were 21,539 dead, and 39,329 wounded. 2011 was the least violent with only 2,777 casualties. Of the nation's eighteen provinces, Baghdad was the deadliest with 23,898 dead for the reported time period, followed by Diyala, Anbar, and Ninewa. Muthanna in the south was the safest with only 94 killed over the seven years covered. A member of parliament's human rights committee immediately criticized the report. The deputy claimed that there were thousands of people who disappeared during the civil war that were never counted. He also said that out in the countryside, reporting to the ministries was poor. No numbers on violence in Iraq can be anywhere near complete. During the civil war from 2005-2008 there were sections of the country that were too dangerous to enter and do any serious reporting. Some insurgent groups also buried their victims. The problem with the ministries numbers however are that they are so far below other organizations that keep track of violence in Iraq, which was not always true.
It's a shame Prashant wasn't aware of the article.  Oh, wait.  He was.  And Joel Wing reminded him of it yesterday.
1 Jul

Joel Wing ‏@JoelWing2
@prashantrao Here's article I wrote comparing govt death figures to others Only recently have their numbers been so off http://musingsoniraq.blogspot.com/2012/04/whats-wrong-with-iraqi-governments.html
Expand
1 Jul