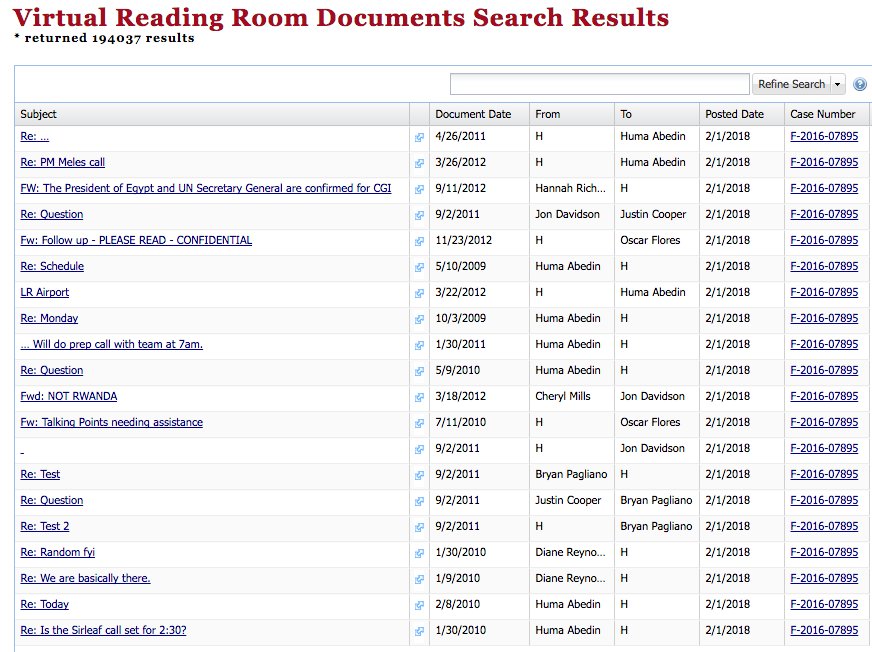 The emails declassified as of the end of January, released after a FOIA request from Buzzfeed reporter Jason Leopold, follow the late December release of another tranche of messages that were stored on the backup program Abedin shared with her husband, disgraced New York congressman Anthony Weiner.
Clinton's use of a private email server for official business including some classified information became a major focus of her critics during the campaign, though then FBI Director James Comey said that she her actions were "extremely careless" but did not rise to the level of a crime.
Comey announced in a letter to Congress shortly before the 2016 election that investigators were looking into the server again after emails were found on a laptop during the sexting probe into disgraced New York congressman Anthony Weiner, who is married to Abedin.

Poor Hillary.  If she'd become president, she no doubt would have ensured that no more e-mails come forward.

Friday, February 2, 2018.  Bears belong in Iraq, US troops do not and look at how the US Defense Dept tries to pretend like 8 civilians killed didn't happen.


There's been a British death in Iraq.  The UK Ministry announces.

It is with regret that the MOD must announce the death of Captain Dean Sprouting of the Adjutant General’s Corps at Al Asad Air Base, Iraq, on 31st January 2018.
He was serving with Black Watch, 3rd Battalion, Royal Regiment of Scotland. The incident is currently under investigation, but we can confirm that it was not the result of enemy activity.

CAPTAIN DEAN SPROUTING
Captain Dean Sprouting joined the Army in 1989.  On the successful completion of his basic training he joined the Royal Green Jackets (RGJ) before transferring to the Adjutant General’s Corps (AGC), Staff and Personnel Support (SPS) Branch in 1991.   During his twenty-nine years of service, Captain Sprouting had served in a number of operational theatres including Northern Yugoslavia, Cyprus and Kosovo.
In 2011 he was awarded the Long Service and Good Conduct Medal.  Having been awarded his Late Entry Commission, Captain Sprouting joined the Regimental Administration Office of 3 SCOTS, 3rd Battalion the Royal Regiment of Scotland in late 2017 from Headquarters 51st Infantry Brigade and deployed to Iraq on 4 Jan 18 for Op SHADER 6.
Captain Sprouting, of Denny, Stirlingshire, was a hugely experienced and respected man.  In addition to his operational tours he had served in Sudan, Angola and Germany, and he had accumulated a huge amount of professional knowledge as a result.  As the Detachment Commander of a small human resources team Captain Sprouting was responsible for looking after the administrative support required to maintain 300 British Service Personnel on operations.

BREAK A British soldier - Captain Dean Sprouting of the Adjutant General’s Corps - has died at a military base in Anbar province, Iraq. Death is under investigation but was not the result of enemy activity, @DefenceHQ has announced
1 reply8 retweets7 likes

In part because so much stupidity parades around masked as 'analysis.'  Take Peter Van Buren's ridiculous offering on the upcoming elections:


What stands out now is the conspicuous absence of American influence. The two main election candidates are current Prime Minister Abadi, and former Prime Minister Nuri al-Maliki. Both come from the same Shi'ite Dawa party, and both have close ties to Iran. The names should be familiar. Maliki was the Great American Hope in 2006, and again in 2010, to unite Iraq across Sunni-Shi'ite-Kurdish lines as the bulk of American occupation forces withdrew. Abadi was the Great American Hope in 2014 to do the same as American troops flowed back to Iraq to fight Islamic State.


Saying that in the first year of the war, okay?

In the second, naive?

One month away from the 15th anniversary of the ongoing Iraq War?

The US government's goal has not been unity among Sunnis, Shi'ites and Kurds.

The US government has repeatedly looked the other way as Iraqi civilians have been under attack and the reason being that this was about oil and control, Peter.

Were you the dumbest member of the US State Dept, Van Buren, or just the most dishonest?

Where has the diplomatic 'surge' been in the last 15 years?

Because it's of no concern to the US government.

Nouri al-Maliki was tolerated as he persecuted the Sunnis because he was going to give the US government the control it wanted.

Only when he drove Iraq to the brink did he get uninstalled by the US and replaced with Hayder al-Abadi.

The Iraq War continues, in part, because liars keep pretending that there's some grand desire to help the Iraqi people.

The Iraqi people don't matter at all to the US government.  They never have.

It's why the targeting of Iraq's LGBT could take place.  It's why women's rights could be demolished.  It's why Hayder's 'disappearing' of Sunnis is overlooked currently.

The US government is fully aware of what takes place in Iraq -- it just doesn't give a s**t.

None of the governments creating the Iraq War did.

CJ Werleman‏Verified account @cjwerleman 35m35 minutes ago
My Latest: Australia bombed and invaded Iraq in 2003, helping unleash the chaos and conflict there today. It now aims to profit on the bloodshed by flooding region with more weapons. Australia wants to become a world's top 10 arms exporter.
4 replies12 retweets19 likes


I think we're all tired of pretending this 'humanitarian intervention' to 'save' Iraq was about anything besides greed and control.

Nyusha‏ @gole_yaas 24h24 hours ago
I was 11 when the American occupation of Iraq began and it’s never stopped hurting.


The Iraq War is illegal and it is ongoing.

Gordon Block (WATERTOWN DAILY TIMES) reports, "Soldiers from the 10th Mountain Division’s headquarters will be deploying to Iraq at a 'critical time' for the country’s future, according to the division’s commander."


US troops do not belong in Iraq.  Many things do belong -- Iraqis, for example, even bears.

National Geographic‏Verified account @NatGeo 15h15 hours ago
Pedestrians in Basra, Iraq, got quite a shock this morning
30 replies206 retweets777 likes

But US troops do not belong in Iraq.

Today the US Defense Dept announced:


So no strikes in Iraq in the last week --

BREAKING: US-led coalition helicopter has killed at least 7 members of #Iraq's armed forces and wounded another 11 after striking a convoy that had just arrested a high-ranking Da'ish commander during a early morning raid in Al-Baghdadi, western Anbar province.
15 replies240 retweets142 likes

More 'help' from the US, apparently.


AFP states at least 8 people were killed including one woman and, "The friendly fire incident drew swift criticism of the US military presence in Iraq from pro-Iranian figures in Baghdad."

So they offer a list of days with no strikes and ignore January 27th when we all know one strike took place and we all know civilians died.

You can't tell the truth and continue the illegal war.