Barack Obama spied on journalists.  He was no hero and he was no saint.

Now going back to Margaret Kimberley and the unnecessary Shaun King (see yesterday's "A simple message").  Shaun King's pretty much a race traitor.  He's embracing the FBI and the CIA despite their long history of attacking us and targeting us and, yes, killing us.

Margaret Kimberley‏ @freedomrideblog
Please read this thread. Black Agenda Report used Shaun King’s own words to call him out. His response was lame and black Twitter came after him. This thread made my day. @blkagendareport 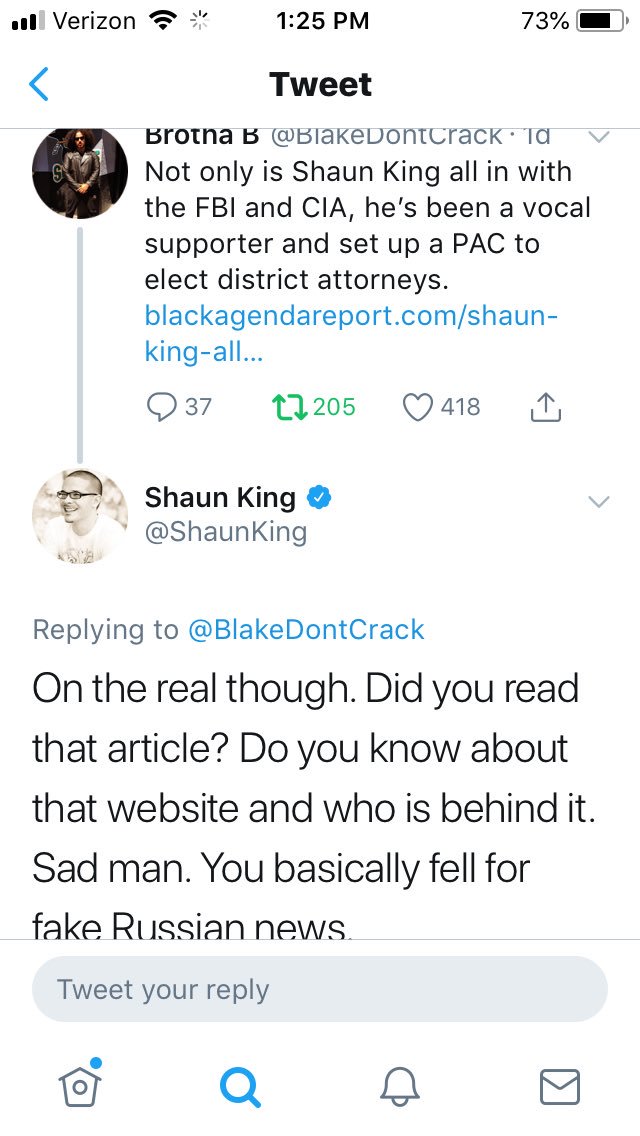 
Shaun King is a jerk.  A real jerk.  And a race traitor.


My name is Penny Evans and I've just gone twenty-one
A young widow in the war that's being fought in Vietnam
And I have two infant daughters, I thank God I have no sons
Now they say the war is over but I think it's just begun

Today, some say the Iraq War is over.  It's not.  Some fools claim Barack Obama ended it. Yeah, and he closed Guantanamo Bay too.  (He didn't -- Iraq and Gitmo, just two of his many broken promises.  And, spoiler, he didn't end veterans homelessness either despite promising to do so.)

Although victory over ISIS has been declared in Iraq, American involvement there will remain necessary for years to come, according to Sen. Joni Ernst, because the United States cannot win the peace for the Middle East nation on its own.
“This is going to take a long time,” the first-term Republican senator said. “We’ve been there 15 years. We have a long ways to go yet. The United States must remain a partner of choice for Iraq as it develops into a young democracy.”
So until the United States is confident in the capacity and ability of Iraqi security forces to defend their country, a U.S. military presence will remain necessary to protect American interests, the Iraq War veteran told the United States Institute of Peace on Thursday in Washington, D.C.

And in a similar development, Tuesday Brigadier General Frederic Parisot held a press briefing in Baghdad and insisted "the Iraqi Security Forces continue to secure the country in order to prevent the resurgence of " ISIS.

They haven't done a very good job of that.  First, ISIS never left, it lost control of some cities but a terrorist organization doens't traditionally rule.  In terms of its primary goal (terrorism), ISIS has not been defeated and  has continued to terrorize Iraq.

After about three years of ISIS controlling almost a third of the country, Prime Minister Haider al-Abadi declared victory in December 2017 against the terrorist group, as well as declaring that the war was over. Analysts though, at the time, warned that many extremists had merely gone underground or had scattered, and would return. These warnings were not taken seriously, but in recent weeks, Western journalists in Iraq are reporting an alarming return to the battlefield, which is going to give Trump a number of sleepless nights, wrangling over a conundrum he alone is unlikely to resolve.
According to the Washington Post, the battle has shifted into a central zone of Iraq with ISIS now adopting more nefarious, if not theatrical, tactics, leaving many civilians saying that the declaration of victory was premature.
“Over the past two months, dozens of people, including local government officials, tribal elders, and village chiefs, have been abducted and killed or ransomed by fighters claiming affiliation with the Islamic State,” the paper claimed recently. “Electricity infrastructure and oil pipelines have been blown up. Armed men dressed as security forces and manning fake checkpoints have hijacked trucks and robbed travellers, rendering the main Baghdad-Kirkuk highway unsafe for a period of weeks.”
It’s a horrendous account of Iraq today, with ISIS adapting to new surroundings, and according to the Post, using more and more local people to help with their heinous work. The speed also is worrying some.

The US war in Iraq continues.  Back to Parisot in Baghdad Tuesday:

A few minutes ago you said whatever the price, you'll continue to fight until [ISIS] is defeated.  Could you define for us when will you know that ISIS is defeated?  What signs are you looking for to be able to then withdraw, stop providing the military support for this operation?

GEN. PARISOT:  Well, now we're still engaged in major combat operations.  And I won't -- I can't speculate, on when it's going to end.

We provide, you know, the best military advice for the political level, but basically, you know, as long as there is a military mission, I guess we are going to stay.


He can't speculate on when that's going to end.  He can't even say what signs would demonstrate success.
"This is going to take a long time."  John McCain was savaged in 2008 for such comments.  Today?  They probably won't even be reported or repeated by most.  "We have a long ways to go yet."

Because we won't allow the Iraqis to have self-rule.  We impose leaders on them.  They are an undeclared colony.  The US government and the Iranian government try to control Iraq.  Do you really think that, if Iraq had self-rule, they would repeatedly choose one person after another to be prime minister -- one person after another who fled Iraq and lived outside the country for decades?

Chickens who fled are suddenly going to make strong leaders?

Of course not, which is why the US keeps installing them.  Bully Boy Bush installed Nouri al-Maliki (based on the CIA profile that found Nouri to be extremely paranoid), in 2010 when Nouri lost re-election Barack Obama gave him a second term via The Erbil Agreement, 2014 is when Barack replaces him with Hayder al-Abadi.  Weak leaders who were chosen because they are weak.

And what do weak men do?  Lash out.  Thug Nouri made clear he was a thug in his first term.  It's been obvious that Hayder is a little thug himself though the western press has largely ignored it until Hayder's attacks on the protester this month.

Tom O'Connor (NEWSWEEK) reports: the US government admitted Thursday to killing at least 1,000 civilians in Iraq and Syria via bombings.  When US war planes are dropping bombs, reminder, that's a war.

Hayder al-Abadi wants a second term as prime minister.  The US government wants that too.

Will they get their way?

Iraq's top Shiite cleric Grand Ayatollah Ali Al-Sistani called for a government to be formed as soon as possible to tackle corruption and poor basic services.
In a Friday sermon delivered by a representative, Al-Sistani also encouraged the incumbent government of Prime Minister Haider Al-Abadi to respond urgently to protesters' demands seeking better basic services and jobs.
"The current government must work hard urgently to implement citizens' demands to reduce their suffering and misery," Al-Sistani's representative said in the Shiite holy city of Kerbala.
Anger is mounting at a time when politicians are struggling to form a government after the May 12 election, which was marred by allegations of fraud that prompted a recount.

The elections were in May.  Next week July turns to August.  Still no prime minister-designate.  In 2010, Iraq went eight months before forming a government.  The way it is supposed to work is that elections are followed by the new Parliament meeting days after the ballots are counted and then they nominated a prime minister-designate (who then has 30 days to put together a cabinet or else the Parliament can name someone new).

Nothing is working in Iraq.  A lot of this dysfunction appears to have been designed by the US government.

If you are wondering why members of both parties just passed the largest defense budget since the height of the Iraq War, consider that much of it goes to defense contractors that spent $69 million lobbying Congress in 2017. pic.twitter.com/6NikMQ6yIB
35 replies482 retweets753 likes

The dysfunction has been hugely profitable for many.  Planned dysfunction?