Children are being slaughtered

Exactly.  And where is Princess David Hogg?

The American princess is only against violence killing children when it's American children -- or at least when it's his childish ass.

David Hogg has always been a joke but never more so than right now.

A super power is killing children in Syria.

Unless you're Princess David Hogg.

Friday, April 13, 2018.  Iraq is no better off -- not when it comes to food, food production, electricity or corruption -- as a result of war but the US War Hawks are screeching for more war yet again. 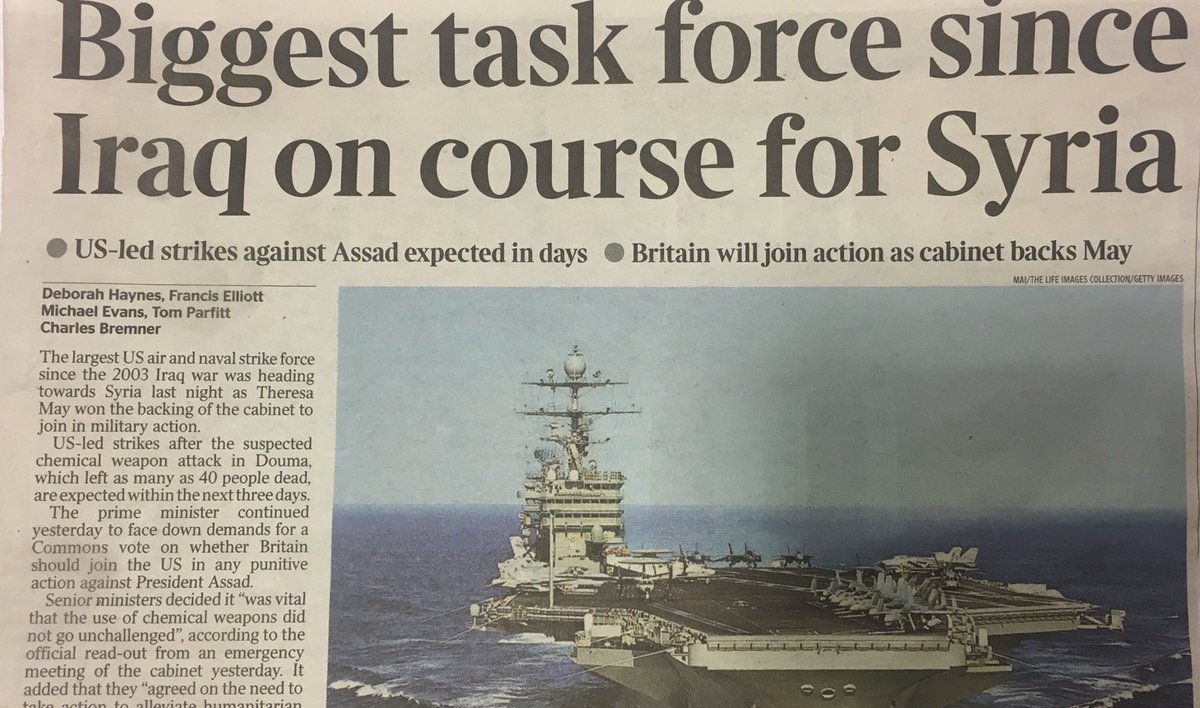 
Pushing for bombing the hell out of Syria?  Of course THE NEW YORK TIMES is there.  Thank you to everyone -- Meryl Streep, the leading hacktress of our time, thank you! -- who has defended this paper repeatedly despite their part in lying the country into war on Iraq.  They're at it again.  Gregory Shupak (FAIR) notes:

A New York Times editorial  (4/9/18) used rather weaselly language to call for more war on Syria. “The president should know by now that tough talk without a coherent strategy or follow-through is dangerous,” the paper wrote. Saying that Trump should “follow through” on his “tough talk” is a way of saying that he should carry out his threats against Syria and its allies. In the bizarro world where the paper evidently operates, it’s not dropping bombs that is “dangerous,” even though the bombs are presumably unsafe for the Syrians beneath them. Another air attack on Syria could provoke a wider war in the Middle East, as well as risk direct confrontation with Russia and possibly even China (National Interest, 4/4/18).
The editorial opened by saying that the world had “grown numb to the slaughter of civilians in Syria” until it saw pictures from Douma. The cognitive dissonance is astounding: The paper notes the emotional potency of pictures of dead and wounded Syrians while saying that the US should ratchet up the war in Syria, a move that is guaranteed—as we know from the results of US attacks on Iraq, Libya and Syria itself—to produce victims who are just as dead and injured as the ones in the photos described.

If the War Criminals have their way, Syria will be another Libya.  For those who forgot or never paid attention, the war on Libya had one real 'achievment' -- Black slavery.  That's who the US put in charge, people who would enslave Black Libyans.  From December 2017, here's Bruce A. Dixon (BLACK AGENDA REPORT):


If the news that black Libyans and black migrants from sub-Saharan Africa were being sold as slaves in Libya was a surprise to you, then you were not reading Black Agenda Report during the 2011-2012 NATO intervention in that country. We covered it. Almost everybody refused to question US foreign policy in Africa during the reign of our first black president. Many US news outlets, many otherwise reasonable people with access to foreign news, and countless others around the world averted their eyes and their ears to the anguish of hunted, lynched and massacred black Africans in Benghazi, in Tripoli, in Sirte and Bani Walid. But as the US Navy and US Air Force unleashed thousands of tons of bombs and missiles on innocent civilians and the military forces of the Libyan government, without which Uncle Sam’s and Barack Obama’s racist rebels could never have toppled Muammar Gadaffi, you heard and read about it each week in Black Agenda Report.

Despite multiple ongoing wars and no real 'win' in any of them, the US government -- and the US media -- want another war.  It's the war Christiane Amanpour has been allowed to advocate for over the airwaves for years now.  No one's been at all bothered by her public advocacy for war.  That's how normalized and natural war has become.  Ted Rall noted this week (at COUNTERPUNCH) that the media has moved the dialogue ever right and how, forty or fifty years ago, the media might mock pacifist voices but those voices were included but, surveying the coverage today, "Nowhere to be found was a pacifist: someone who opposes war, all war, no matter what. Nor were there any anti-interventionists: people who say Syria is not our business and should be left to sort out its own affairs."

Adam H. Johnson Retweeted Chris Hayes
this is a popular cute talking point that's designed to flatten the escalation of launching airstrikes on the regime. When people mean "bombing Syria" in the current context they clearly mean the state not the territory it nominally holds.
Adam H. Johnson added,

Chris HayesVerified account @chrislhayes
Let's get something straight about the US bombing and or striking Syria. The US has been bombing *the absolute crap* out of Syria for years. It just hasn't been attacking Assad. (Though there was recently a pretty damn deadly skirmish w Russian mercenaries supporting Assad)
Show this thread
12 replies120 retweets399 likes

"we've already dropped 80,000 bombs on Syria what's a few hundred more" is really the point of this clever refrain. It's designed to downplay the meaningful escalation that's going on while bashing some undefined straw hypocrite.
6 replies47 retweets222 likes


That's Chris Hayes, MSNBC talking head, the man THE NATION had covering the Barack Obama White House -- despite the fact that his wife was an attorney there.  Ethics, if they had any, they tossed them aside long ago in the midst of  a pole dance.


I mean, our heroes are supposed to be Mueller and Comey, who headed the FBI when many progressive groups were surveilled. We know that, what happened under their reign. For years and years, those two headed the FBI.
If you watch MSNBC, you see people like Chris Hayes interviewing people like Barry McCaffrey, because McCaffrey’s anti-Trump. And by the way, I saw Chris Hayes interviewing Barry McCaffrey on the week that we marked the 15th anniversary of the invasion of Iraq. If there was a voice on television that was more pro–“let’s invade Iraq, let’s invade them tomorrow,” it was Gen. Barry McCaffrey on NBC and MSNBC. So I’m hoping, when I see, “Wow. McCaffrey’s on with Chris Hayes,” that maybe Chris Hayes is going to ask him to explain how he was so wrong about the need to invade Iraq, and does he feel he owes an apology? Instead, because McCaffrey’s critical of Trump, I guess McCaffrey’s now our hero.
So you could go one by one from MSNBC to CNN, where they have Mr. Clapper—James Clapper, the director of National Intelligence, he went before the US Senate and he perjured himself and said the NSA is engaging in no bulk surveillance—he’s the hero on CNN. So you find this collection of perjurers and war criminals, because they’re critical of Trump, they’re put forward on MSNBC and CNN—and remember, those are supposed to be the liberal cable news channels—they’re put forward as some sort of heroes that are going to save the republic, save progressives, save democracy. I just don’t see it.
And it shows, I think, the limits. You brought up the ownership. It shows the limits of TV news channels owned by Comcast, in the case of MSNBC, where they almost never bring up net neutrality, the saving of which is probably the main First Amendment issue facing our country and progressives, and then CNN, owned by Time Warner.

Again, Chris playing footsie with the War Hawks.  That's what you do to be on MSNBC.

When Americans died on 9-11, it was a horror.  But somehow when children die in these wars the US starts, it's just what-has-to-be-done.  Life matters or it doesn't.  A life is not more important because the person lives in Iowa and not Iraq.

More war will mean more deaths.  Chris Hayes can go full on Rachel Maddow all he wants but that doesn't change the reality that people will die as a result of what he's doing right now.

And this despite the fact that the US is already involved in so many wars.  Isn't that a dying empire, by the way?  When it's one war after another just to struggle to keep afloat?

At any rate, the Iraq War continues.

25 dead in attack at #Iraq funeral of anti-#ISIS fighters ara.tv/rysv8 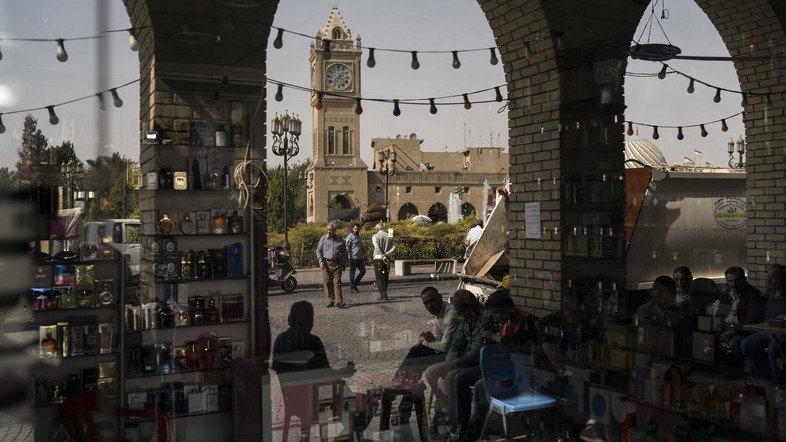 Baxtiyar Goran (KURDISTAN 24) observes, "In December, Iraqi Prime Minister Haider al-Abadi declared a 'final victory' over the extremist group, but the militants continue to carry out assassinations, ambushes, and bombings across the country."


That is the reality.  Hayder al-Abadi has not destroyed ISIS.  It was his claim to fame, what he planned to run for re-election on.  What, in fact, he's still running for re-election on because he has nothing else.

This week, he held a meeting about anti-corruption. 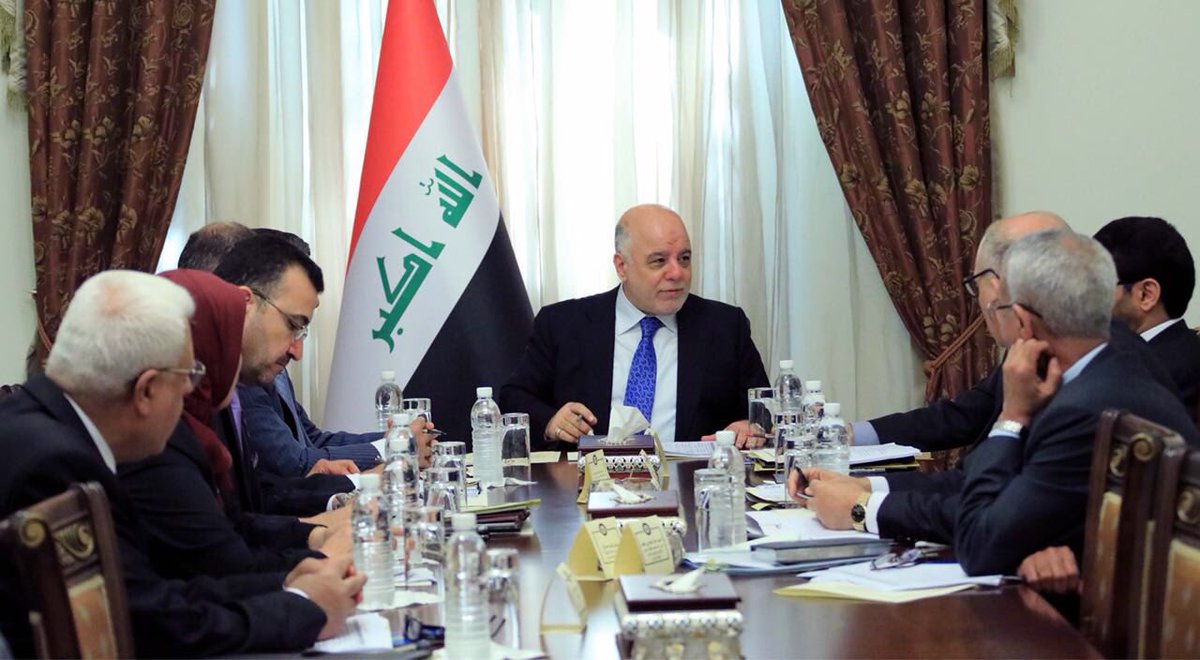 
He's been promising to take on corruption since he was installed in 2014.  Few are buying his act when no results have been produced.


Too bad for Hayder because elections are weeks away.  May 12th is when Iraq is scheduled to hold elections.

As of April 11th, candidates and coalitions running in the 2018 #IraqiElections have officially started their campaigns. integrity_UK has produced an infographic listing the primary electoral lists and coalitions. pic.twitter.com/dPAczcfkGa
0 replies0 retweets1 like

Barbara Nimri Aziz (COUNTERPUNCH) surveys the post-war effects on Iraqis and finds no improvements in the basics:


When we turn to fresh produce, fruits and vegetables, the situation is even more alarming. Here too most produce is imported. Even oranges (in this land of orange trees). Beets and cabbage are marked ‘Iraqi’, but pomegranate, okra, eggplant, bananas, cucumber and other greens are from Jordan, Turkey and beyond. The nicest looking tomatoes (a staple in Iraqi dishes) are foreign produced.
Why these imports when Iraq is still largely rural? Foreign produce is less expensive than that produced by Iraq’s farmers, I’m told. Why? Because they are priced to undercut Iraqi production. Why? Because import licenses are awarded to foreign suppliers. And why is this? Because ministry personnel who negotiate these contracts receive handsome kickbacks. This, at the same time, when: a) electricity supply in Iraqi is so weak and unreliable that local production is impossible, and b) ministries responsible for agriculture and manufacturing don’t function in the interests of Iraqi producers. Iraq’s once thriving agricultural base is woefully neglected and derelict.
These conditions are a direct result of government policy and a heavily corrupt bureaucracy. In the case of the bankrupt Palestinian economy, declining production and joblessness are to a large degree imposed by the occupier, Israel, implemented through a compliant Palestinian bureaucracy, oversupplied with wage earners whose disposable income supports a consumption economy and reliance on imports.
In Iraq, the US government still wields enormous influence on Iraq’s administration. From the start of its occupation of Iraq, the U.S. has thwarted attempts to rebuild the nation’s electricity grid and build and install machinery essential to a functioning manufacturing base.
(Significantly, some energy is available to ensure communications function, so that Iraqis can access television and their phone apps. Most homes and small businesses augment a patchy, inadequate government electrical supply with batteries and generators, imported of course.)
These conditions, in both Palestine and Iraq, are bald ‘disaster capitalism’. They exhibit what Naomi Klein identifies in The Shock Doctrine: The Rise of Disaster Capitalism. Her influential 2007 study was followed in 2015 by Disaster Capitalism, offering irrefutable evidence of these insidious foreign-directed processes which enrich outside powers while directing responsibility onto incompetent corrupt local governments.
At every level, from reliance on underwear for its soldiers to pharmaceuticals to tangy beverages, Iraq’s decline into a consumer nation is unarguably the policy of outside powers. It works with a compliant merchant class of suppliers, happy to take a narrow slice while its foreign partners enjoy the prime cuts. It’s a process well know to every Iraqi.


BLACK AGENDA REPORT's Margaret Kimberley notes an action taking place this weekend in the US. 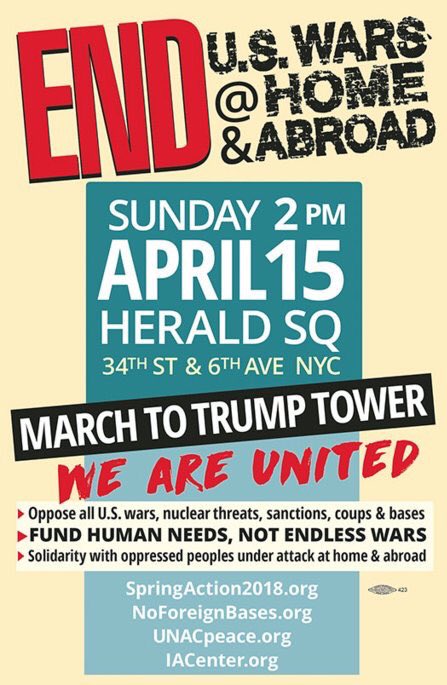