The war still goes on.

Large parts of the once thriving Christian community of Quaraqosh in Northern Iraq have been left in ruins.
The church in the town, which lies near Mosul, was destroyed by ISIL.
Now liberated from the extremists, those Christians who have returned, are struggling to deal with the new reality.
Marie Sabri a displaced resident said: ‘‘What is there to come back to, destruction? Our beautiful city, where we used to live happily, go to parties, and now we come back to this? To this destruction and injustice? They burned down homes and this…this is a tragedy. My uncle’s house has become like this (church) isn’t this pitiful? It is pitiful.’‘

It actually was better for Iraqi Christians under Saddam Hussein.

Iraq was a secular state and Christians were not targeted the way they have been since the war began.

For a New Iraq ‏@foranewiraq  Feb 14
“I tell all displaced Christians to wait and to be strong” a message from Priest George to all Christian #Iraqis. #Mosul #ForaNewIraq
0 replies13 retweets14 likes


Christianplus Int'l ‏@Christianpluse  2h2 hours ago
#Displaced Iraq Christians who fled from Islamic State militants in Mosul, pray at a school acting as a refugee camp in Erbil. 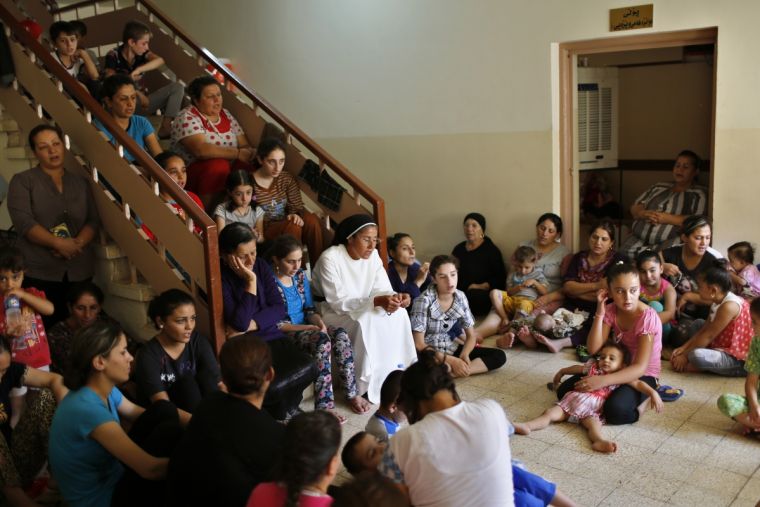 
Now they're victims of ISIS.

Before that, they were victimized by Shi'ite militias.  (As well as their own government.)

This is the mess created that so many in America avoid.


Truth tellers are rare in the world.

They are even more rare when it comes to truth telling re: Iraq.


Moonnar27 has been a truth teller.  (Here's a Tweet we included here last January by Moonnar27.)

Her truths have been brave and important.

As the silence continues, people are worrying.

Albaraa Albo ‏@RaisingHopeAust  Jan 31
Does anybody know @moonnor27 personally? Her life may be in danger. People have been trying to contact her phone & there's no response...
0 replies2 retweets2 likes

It wouldn't be at all surprising if Hayder sought out to silence her.

Even less surprising if some Shi'ite militia did so.

Moonnor27 may have just gotten sick of Tweeting.

I'm sure the awful news she sees wears on her more than any of us could guess.

But we're opening with this concern because there is good reason to worry and she's someone we have long noted.

Where's the global interest if not concern?


122 days to liberate Mosul and counting.

The city was seized by the Islamic State in June of 2014.

Hayder al-Abadi, Prime Minister of Iraq, waited until October of 2016 to attempt a liberation or 'liberation' of the city.

What's to show for it?

A few weeks ago, they were claiming they had liberated eastern Mosul.

That's not being yelled as loudly now due to several bombings in that section of the city.

War Crimes a plenty in the city, though.

Armed forces fighting Islamic State (also known as ISIS) to retake a town and four villages near Mosul looted, damaged, and destroyed homes, Human Rights Watch said today. There was no apparent military necessity for the demolitions, which may amount to war crimes and which took place between November 2016 and February 2017.
The Iraqi authorities should investigate allegations of war crimes and hold those responsible to account, Human Rights Watch said. The United States and other countries providing military assistance to the Iraqi Security Forces should press the government to carry out these investigations. The United Nations Human Rights Council should expand the investigation it established in 2014 on ISIS abuses to include serious violations by all parties, including the Popular Mobilization Forces (known as the PMF or Hashd al-Sha'abi), units that were formed largely to combat ISIS, and are under the direct command of Prime Minister al-Abadi.

“Absent a legitimate military objective, there is no excuse for destroying civilian homes,” said Lama Fakih, deputy Middle East director at Human Rights Watch. “All the destruction does is to keep civilians from going home.”
To the southwest of Mosul, Human Rights Watch documented looting and extensive demolition of buildings in three villages using explosives, heavy machinery, and fire. Witness statements about the extent and timing of the demolitions, between late December and early February, were corroborated by satellite imagery showing the destruction of at least 345 buildings, including the main mosque, in the village of Ashwa during that time. Satellite imagery reviewed by Human Rights Watch showed that the abuses took place after anti-ISIS forces incorporated the villages into a large network of earthen berms and trenches. Locals told Human Rights Watch the only armed forces in the areas taken from ISIS were different groups within the PMF.

In addition to alarm of the destruction of homes, the United Nations High Commissioner for Refugees released the following:

With a new phase in the Mosul offensive poised to begin, Iraq’s Humanitarian Co-ordinator, Lise Grande, toured UNHCR’s Hasansham U3 displacement camp and the government-built Khazer M1 camp, east of Mosul, where UNHCR has also provided support and distributed emergency items.
More than 82,000 people have been provided with shelter and emergency items in UNHCR-supported camps to the east of Mosul since the start of the offensive in October. Humanitarian agencies, working with the Iraqi government, are preparing for a new outflow of civilians from western Mosul. Construction work is beginning at a new site south of Mosul to provide additional shelters. Only a small number of families from densely-populated western Mosul have managed to escape and are staying in displacement camps, including Hasansham and Khazer.
UNHCR has completed seven camps, including Hasansham U3, and two more are under construction. The agency is currently able to provide some 11,000 families (66,000 people) with shelter as part of the Mosul response, a figure which should expand to 20,000 families (120,000 individuals) in the near-term once land is allocated. By the end of March, it is anticipated that the Government of Iraq and humanitarian partners would have built camps and emergency sites to potentially host 41,155 families (246,930 people) in camps and emergency sites.
“We anticipate the next phase in the battle for Mosul will be an even bigger test for the humanitarian community”, said UNHCR’s Representative in Iraq, Bruno Geddo, who was visiting the displacement camps along with Iraq’s Humanitarian Co-ordinator. “We are preparing for the worst, but hoping for the best.”
Some 153,894 people remain displaced, having fled from Mosul and surrounding areas since October 17. At the same time, more than 46,000 people from Mosul and surrounding areas have returned to their places of origin, eager to return home and rebuild their lives.
However, some returnee families also have gone back to the camps due to insecurity and a lack of basic services in their areas of origin. Ms. Grande stressed that returns should be safe, dignified and voluntary. “You cannot force people to go home. People have to make that choice on their own. They have the right to decide”, she said.
For more information please contact:
Caroline Gluck gluck@unhcr.org +9647809207286 @carogluck
Andreas Needham needham@unhcr.org +9647809207282 @andreasneedham

How bad is The Mosul Slog going?

AP reports, "The United Nations says it's temporarily pausing aid operations to neighborhoods in the eastern half of the Iraqi city of Mosul as attacks by the Islamic State group continue to inflict heavy civilian casualties there."

The Iraqi armed forces will eventually capture west Mosul, which is still held by Isis fighters, but the city itself will be destroyed in the fighting, a senior Iraqi politician has told The Independent in an interview.
Hoshyar Zebari, a Kurdish leader who until last year was the Iraqi finance minister and prior to that the country's long-serving foreign minister, says that Isis will fight to the last man in the densely-packed urban districts it still holds.
"I think west Mosul will be destroyed," says Mr Zebari, pointing to the high level of destruction in east Mosul just taken by government forces. He explains that Isis is able to put up such stiff resistance by skilful tactics using networks of tunnels, sniper teams and suicide bombers in great numbers. He adds that no date has yet been set for the resumption of the Iraqi government offensive into west Mosul, but he expects the fighting to be even tougher than before.


Cockburn goes on and on.

He never notes that Parliament voted Zebari out last fall as Minister of Finance due to corruption -- or that Iraq's high court upheld his removal from the post.

It does mean if you're listing Zebari's credit, you include that he was voted out for corruption.  (Zebari has maintained his innocence and insists that this is plot on the part of former prime minister and forever thug Nouri al-Maliki to stage his own comeback.)


f Islamic State is driven from its Iraqi stronghold of Mosul, it will switch tactics to wage an insurgency from mountains and deserts, a top Kurdish intelligence official has told Reuters.


RUDAW notes, "At least 15 people have been killed and another 50 wounded in a suicide truck bombing in Baghdad’s Sadr City neighbourhood on Wednesday, Reuters reported citing security sources."  Also yesterday the US Defense Dept announced:

Strikes in Iraq
Fighter aircraft and rocket artillery conducted five strikes in 21 engagements in Iraq, coordinated with and in support of Iraq’s government:


Task force officials define a strike as one or more kinetic events that occur in roughly the same geographic location to produce a single, sometimes cumulative, effect. Therefore, officials explained, a single aircraft delivering a single weapon against a lone ISIS vehicle is one strike, but so is multiple aircraft delivering dozens of weapons against buildings, vehicles and weapon systems in a compound, for example, having the cumulative effect of making those targets harder or impossible for ISIS to use. Accordingly, officials said, they do not report the number or type of aircraft employed in a strike, the number of munitions dropped in each strike, or the number of individual munition impact points against a target. Ground-based artillery fired in counterfire or in fire support to maneuver roles is not classified as a strike.


The Iraqi National Accord (INA) political coalition led by Vice President Ayad Allawi has accused Iran of violating Iraq’s sovereignty on its territorial waters over strategic waterways leading to the Arabian Gulf, and has urged the Iraqi government to take action.
The INA said in a statement yesterday that “Iraq’s rights are today in danger after Iran escalated its campaign to acquire further gains [at Iraq’s expense],” adding that the gains coveted by the Iranian regime where both “from the river side of the Shatt Al-Arab or on the sea [boundary].”

The statement also accused Iran of “continuing its advance [on Iraqi territory] at a rapidly quickening pace and against Iraq’s sovereign maritime rights both in the Arabian Gulf and in international waters,” and said that Iran was demanding control and sovereignty over Iraqi ports.