I look at something like this and want to cry.

Old Iraqi Pictures ‏@IraqiPic  2d2 days ago
Iraqi women in the media in the al-Shaab stadium in Baghdad in the late of 1970s. 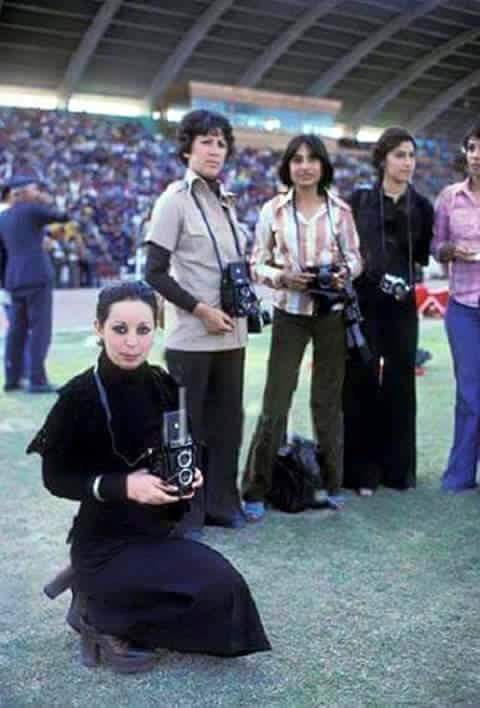 The United States has destroyed it.

We put Shi'ite fundamentalists in charge -- they have legendary grudges against Sunnis because all the ones we put in charge are cowards who fled Iraq in the 70s or 80s and only came back once we invaded the country.

Now they try to work out their grudges.

They destroy the culture of Iraq and we wonder why there are problems?

Why 'they' can't get along?

Here's a better question: Why did we refuse to let Iraqis in Iraq be rulers?

Why did we turn to religious zealots who had fled the country?

Iraq is in shambles because of us.

Wednesday, February 22, 2017.  Chaos and violence continue, the western media covers one death while largely ignoring another, and much more.


Another US death in Iraq.  Yesterday, it was announced that "Pfc. Brian Patrick Odiorne" died in Iraq.

Death of a Fort Hood Soldier

FORT HOOD, Texas -- The Department of Defense announced Feb. 21 the death of a Fort Hood Soldier who died Feb. 20, in Al Anbar Province, Iraq, from a non-combat related incident while supporting Operation Inherent Resolve.
Pfc. Brian Patrick Odiorne, 21, whose home of record is listed as Ware, Massachusetts, entered active-duty military service in October 2015 as a cannon crewmember.
He was assigned to 2nd Battalion, 82nd Field Artillery Regiment, 3rd Brigade Combat Team, 1st Cavalry Division, Fort Hood, Texas, since May 2016.
Odiorne's awards and decorations include the National Defense Service Medal, Global War on Terrorism Service Medal and Army Service Medal. He will be posthumously awarded the Inherent Resolve Campaign Medal and Overseas Service Ribbon.
Circumstances surrounding the incident are currently under investigation by Special Agents from the U.S. Army Criminal Investigation Command.
No further information will be released at this time to protect the integrity of the ongoing investigative process.

Which usually means, "Let's stall until the press loses interest."

Another American who should have been somewhere else, not being used to continue the never-ending Iraq War -- a war that his 14 years next month.

And Barack swore he would end it.

He's a War Criminal and so is Bully Boy Bush.


Mike Glenn (HOUSTON CHRONICLE) notes, "Odiorne was originally from Ware, Mass. - about 80 miles west of Boston. He joined the Army in October 2015 and had been at Ford Hood since May 2016."  Anthony Fay and Hayley Crombleholme (WWLP) report, "Since May, Odiorone had been assigned to the 2nd Battalion, 82nd Field Artillery Regiment, 3rd Brigade Combat Team, and 1st Cavalry Division out of Fort Hood, Texas. He entered active-duty service as a cannon crewmember in 2015."

Honoring #USArmy PFC Brian P Odiorne, died Feb 20, 2017 in Iraq. Honor him so he is not forgotten.

Odiorne's loved ones said that he stayed in touch with them even when he was busy.
"Even if we didn't get to talk until the next day, we'll make sure that we at least keep in touch, like 'Hey, I'm okay, I'm letting you know I'm safe'," [Kelsie] Delisle added.
Delisle spoke to Odiorne on the phone every night, including Sunday - the night before he died.
"We'd always tell each other every night, when we hung up, that we missed each other and we loved each other and I'll talk to you tomorrow," Delisle explained.
That's what they told each other Sunday night, but Delisle found out about her close friend's death Monday morning after reading a post on Facebook.
"I don't know what to do and I have not stopped crying since then because it feels like I lost a part of me," Delisle said.

I can't believe what I'm hearing... I had just received a message from you the other day asking to check up on your grandmother for you every now and then since you can't always talk to her. I promise I will visit her. This is just so surreal. You were such a kind, gentle, caring person who's heart was as big as your smile. Thank you for serving our country, RIP Brian Odiorne, you'll be missed and never forgotten.


And he notes  Molly Przybyla:

I lost the most incredible man I have ever met. Brian made me who I am today, he broke me out of my shell, and helped me be more confident and out going and I didn't get the chance to tell him that he is the love of my love, the one I was supposed to end up with. We were supposed to get back together but at least I know how he felt about me, told me he never stoped loving me, and I told him I loved him too. I will never forget him, I will always hold him in my heart forever... and noone can ever replace that he's my soul mate and his family will always be my family. I am so sorry, you guys always where there for me and I love you guys and I love you


That's about all from the western press.

They are noting another death, however.


AP notes, "British news media say a suicide bomber who attacked a military base in Iraq this week was a former Guantanamo Bay detainee freed in 2004 after Britain lobbied for his release."  Guy Faulconbridge and Ali Abdelaty (REUTERS) report:

Islamic State militants said Abu-Zakariya al-Britani, a British citizen who was originally known as Ronald Fiddler and then cast himself as Jamal Udeen al-Harith, detonated a car bomb at an Iraqi army base southwest of Mosul this week.
The militants also published a photograph of the smiling bomber surrounded by wires in the seat of what appeared to be the car in which he blew himself up.

The Islamic State statements could not be independently verified by Reuters but three Western security sources said it was highly likely that Britani was the bomber and now dead.


Jane Onyanga-Omara (USA TODAY) adds, "Harith, 50, traveled to to join the Islamic State, also known as ISIS and ISIL, in 2014, raising fears that the money given to him had been passed on to ISIS. He was known to fellow militants as Abu-Zakariya al-Britani."  That same report notes that War Criminal Tony Blair is offended by these reports.

He insists that the government he led did not pay the man one million dollars . . . Blair only secured the man's release in 2004.

Of the two, I think I'd go with the payment.  Would you rather be known as the one who demanded the release of a killer or the one who paid him compensation?

Maybe Tony Blair can take pride in that too?

And to think, Iraq's prime minister Hayder al-Abadi had over two years to plan this operation.