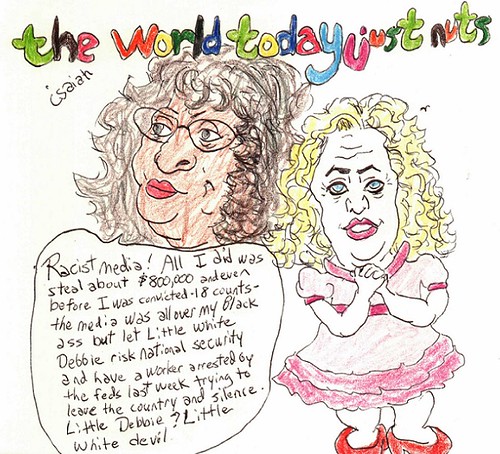 I love that cartoon.

Funny thing, for all her lying, it's the CIA's own collection that outs her.

She got mad when she was called a CIA asset by THE NEW YORK TIMES last year.

That's at the CIA reading room.  It's a 2/18/67 WASHINGTON POST article entitled "NSA Declares CIA Used It to Gather Intelligence."  From the article:

The CIA provided up to 80% of the National Student association's budget and used its officers and staff in direct intelligence gathering activities, the organization's supervisory board confirmed Friday night.
[. . .]
Gloria Steinem, a New York free lance writer, acknowledged in an interview Friday that she worked closely with the CIA to organize groups of American young people to attend world youth festivals in Vienna and Helsinki in 1959 and 1962.
She strongly defended her actions and had great praise for the CIA agents with whom she collaborated.


There's a lot about Gloria there.

Including a hilarious piece by an author who, in the mid-70s, wrote about her CIA involvement in passing and she threatened to sue him, so he apologized but checked it out and he was right.  You should read the lies she told him when she was trying to convince him he was wrong.

Monday, July 31, 2017.  Chaos and violence continue, the Islamic State continues, Tony Blair continues to walk on war crimes, the US government continues to fail veterans, and much more.


Amir Shah (AP) reports, "The Islamic State group targeted the Iraqi Embassy in Kabul on Monday, with a suicide bomber blowing himself up outside the gates, followed by three gunmen who stormed into the building. The assault set off a four-hour firefight that ended only after Afghan security forces said they had killed all the attackers."

Ret. Army NG Staff SGT Will Thompson has had double lung transplant - retirement pay kicks in at 60, but he is pretty sure he won't make it
0 replies0 retweets0 likes


Last week, BURNPIT 360 was in DC providing a Congressional briefing.  Veteran Will Thompson was among those participating.

Will Thompson: My name is retired Staff Sgt William Joseph Thompson.  I have served 23 years, 3 months, 11 days in the United States Army and the West Virginia Army National Guard.  I have deployed twice with the West Virginia Army National Guard to Iraq. During my last deployment, I was stationed at Camp Striker on the Victory Complex.  My symptoms of frequent coughing started on September 2009 while in Iraq. I was treated for allergies by the doctors and PAs.  I returned to Fort Stewart Georgia and after I mentioned to the doctor that I had been having frequent cough, they did a chest x-ray that revealed bilateral pneumonia.  They treated me with an antibiotic and sent me home to West Virginia and told me to follow up with my PCP in one week. After a week, I followed up with my doctor [. . .] and after a CATSCAN he discovered that I had coronary fibrosis with pulmonary nodules.  He stated my lungs looked like an 80-year-old coal miner's lungs. He referred me to Walter Reed Army Medical Center where I was treated by Dr. Jacob Collen for six months.  He admitted me to the Warrior Transition Unit at Walter Reed and, after six months of testing which included an open lung biopsy, I was informed that I had titanium, magnesium, iron and silicon in my lungs.


The ones paying for the war -- in Iraq and elsewhere -- are not the ones who started it.

Tony Blair being responsible for the murder of a million Iraqi civilians should be enough to prosecute him.
1 reply12 retweets23 likes

Disgusting decision. You could be prosecuted for harming a cat or a dog but not for killing a million #Iraqi people.
5 replies15 retweets15 likes

He lied a country, a world, into war.


And he won't stand trial.

Will Thompson: My life and my family's life has changed since I returned home from deployment in 2010. Due to my low immune system now, I have to wear a mask in highly populated areas to prevent infection.  I challenge you to go into a store wearing a mask like the one I have on right now and see how people treat you.  I have been treated like I was contagious and I have had to explain many times that it was for my protection.  And with that it's even hard to hang out with my kids during the day when they say, "Daddy, can we do this?" and I say, "No, we can't do that." Or "Daddy, let's go skiing."  I can't do that. "Daddy, let's go swimming."  I can't do that. "Daddy, can I have a piggy back ride?"  I can't do that.  "Daddy, let's go to the beach."  I can't do that. I can't do that because of bacteria in the water [. . .] I don't feel like a man because my role as a husband has been taken over by my wife.  She now does everything that I used to do.  There are so many things that I can no longer do. I am a warrior of the United States of America. I gave my lungs for my country.


The suffering gets dispersed to the 99%.

The 1% just get dividends.

Writing for Middle East Eye, Mansfield and Antonia Benfield, who represented the former Iraqi general at the high court, said the ruling has “brought to an end the hope of prosecuting Tony Blair, Jack Straw and Peter Goldsmith for the crime of aggression”.
They said: “On the national and international stage the failure of the British government to give a tangible commitment to the prosecution of the crime of aggression undermines the rule of law.  It sets a dangerous precedent in times of global insecurity and sets an example to the rest of the world that states can wage aggressive war with impunity.

“The devastation that has been caused to millions of Iraqi civilians leaves the world with only one lesson – how to commit the most serious of crimes, and get away with it.”

While the dead and the living victims continue to be scarred.

Will Thompson is still fighting for his rights with the VA.

The fight continued throughout Barack Obama's 8 year presidency and continues to this day.

Grasp that the VA issues are still not fixed.

Grasp that even the basic issue of one uniform electronic record that would follow a person from service member status to veteran status didn't accomplished.

What a proud moment for Barack and part of the reason veterans still have to fight so hard to get the appropriate disability ratings.

In what world is right that Barack's raking in millions while Will Thompson has to depend on charity for medical and treatment needs because the US government is still refusing to cover the disabilities their burnpits created?

Politicians are seen as slime for exactly this reason -- they smile and brag about how great they are when all they do is destroy the people they are supposed to be representing.

Remember that the next time hair plugs and pot-bellied Bruce Springsteen publicly pretends to care about veterans.

No one caring about veterans would be partying on a yacht with Barack.


In a July 19 statement, Kurdistan Regional Government President Massoud Barzani said that holding a referendum is a natural right of the people of Kurdistan that they will not back down from. According to the spokesperson for the Independent High Electoral and Referendum Commission (IHERC) in Kurdistan, around 6 million people in the Kurdistan Region and the disputed territories such as the oil-rich city of Kirkuk, Sinjar, Makhmour and Khanaqin have the right to vote in the referendum. Forty-eight percent of the Kurdistan Region’s land is still disputed between Baghdad and Erbil and some 2.7 million people live in the disputed territories.

According to Article 140 of the constitution, the territorial disputes between Baghdad and Erbil was set to be settled by the end of 2007, but the Iraqi government never implemented this article. For Barzani, the nonimplementation of the Iraqi Constitution is one of the main reasons he wants to hold a referendum Sept. 25 in the Kurdistan Region and the contested areas. However, there are many challenges that may eventually keep the referendum from happening on the scheduled date, especially in the disputed territories.
Barzani’s referendum decision was preceded by a vote of the Kirkuk Provincial Council (KPC) April 4 to hold a referendum to decide the future administration of the province. However, many of the Arab and Turkmen members of the KPC boycotted the vote altogether. The KPC’s vote came after a call March 14 by Kirkuk Gov. Najmiddin Karim to raise the Kurdistan flag over the government buildings in Kirkuk province. But the Iraqi Turkmen Front opposed this move and filed a case against the acting head of the KPC, Rebwar Talabani, in Baghdad. By the same token, the Arabs and Turkmens of the disputed territories are expected to boycott the upcoming referendum and ask Iraq’s supreme court to declare that holding a unilateral referendum in the disputed territories is illegal. If these measures fail, they may eventually resort to violence. Nationally, Baghdad is not happy about the planned referendum either.


It's interesting, can you write about this topic and not know ARTICLE 140?

Because it doesn't appear AL-MONITOR understands ARTICLE 140 at all.

Article 140 of Iraq's Constitution is rather straightforward on oil-rich Kirkuk:

The responsibility placed upon the executive branch of the Iraqi Transitional Government stipulated in Article 58 of the Transitional Administrative Law shall extend and continue to the executive authority elected in accordance with this Constitution, provided that it accomplishes completely (normalization and census and concludes with a referendum in Kirkuk and other disputed territories to determine the will of their citizens), by a date not to exceed the 31st of December 2007.


Are writers for AL-MONITOR illiterate?

ARTICLE 140 calls for a census and a referendum.

It was always to be settled by a referendum.

This isn't a Barzani creation.  It's the Iraqi Constitution.

There's also a 'lightness' about AL-MONITOR's writing on this that needs to stop immediately.

They have kicked it back.

And there's a good chance that, before September arrives, they'll try to do it again.

Elections are not held when you're ready -- they're to be held as defined by law.

Hayder al-Abadi is in violation of the law at present.

Treating this as a non-story is appalling.

That needs to be noted repeatedly.