Predators come out to play 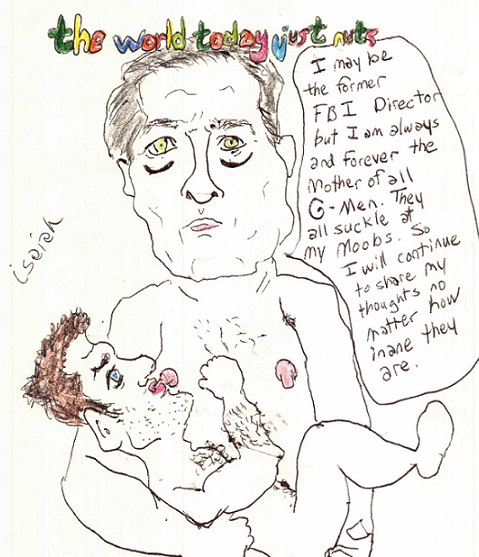 Isaiah's THE WORLD TODAY JUST NUTS "The Mother of all G-Men" which kind of reminds me of an album cover -- a Red Hot Chili Peppers album cover.

Do you live near the coast?  Ready to see more alligators?  How about wolves?  Kashmira Gander (NEWSWEEK) reports:

Thanks to conservationists, large predators are venturing back to the hunting grounds they dominated before their populations were decimated by humans. The knock-on effects of this, according to a new study, includes alligators at the beach, killer whales in rivers, and mountain lions in grasslands.
Sightings of predators in areas they are not generally found have risen in recent years due to successful conservation projects, a new study in the journal Current Biology highlighted.
Brian Silliman, professor of marine conservation biology at Duke's Nicholas School of the Environment, who led the study, said in a statement: "We can no longer chalk up a large alligator on a beach or coral reef as an aberrant sighting.
"It's not an outlier or short-term blip. It's the old norm, the way it used to be before we pushed these species onto their last legs in hard-to-reach refuges. Now, they are returning."
Dane Huffman (TRIANGLE BIZ JOURNAL) adds:
“The assumption, widely reinforced in both the scientific and popular media, is that these animals live where they live because they are habitat specialists," Silliman said. "Alligators love swamps; sea otters do best in saltwater kelp forests; orangutans need undisturbed forests; marine mammals prefer polar waters.
"But this is based on studies and observations made while these populations were in sharp decline. Now that they are rebounding, they’re surprising us by demonstrating how adaptable and cosmopolitan they really are.”
.So now they can return to areas that they once roamed through.  I’m picturing a lot of “the dingo ate my baby” in the near future.
Good for the animals that they’re no longer at risk of dying out.  But let’s be honest that this will put humans – especially children – more at risk.  A wolf?  A child might think it’s a dog.  Especially a little two or three year old child.
Let’s go back to yesterday’s topic “When the sun is gone ” because I noted how it’s a transformation and I saw Mindy Weisberger (LIVE SCIENCE) which has to be the best explanation of what will happen.

The length of a star's life span depends on its size. Our sun is a yellow dwarf with a diameter of around 864,000 miles (1,390,473 kilometers), or about 109 times the size of Earth, according to NASA. Yellow dwarf stars live for about 10 billion years, and at 4.5 billion years old, our middle-age sun is about halfway through its lifetime.
Once its hydrogen supply is depleted, the sun will start consuming its heavier elements. During this volatile and turbulent stage, vast quantities of stellar material will hurtle into space as the sun's body expands to 100 times its current size, becoming a red giant. Then, it will shrink down to a tiny, extremely dense white dwarf star, about Earth-size.


Mohammed Ebraheem (IRAQI NEWS) reports, "Iraqi security authorities denied on Tuesday media reports about an attack against a parliamentary candidate and three policemen in Diyala governorate." Regardless of their veracity, whispers and shouts dominate Iraq as the country gears up for yet another round of national elections.

.@ihec_offcial successfully run simulation exercises ahead of the parliamentary elections on 12 May. The tests covered the counting of votes, secrecy of the ballot and the security of the voting process #IraqVotes


May 12th, elections are supposed to take place in Iraq.  Ali Jawad (ANADOLU AGENCY) notes, "A total of 24 million Iraqis are eligible to cast their ballots to elect members of parliament, who will in turn elect the Iraqi president and prime minister."  RUDAW adds, "Around 7,000 candidates have registered to stand in the May 12 poll, with 329 parliamentary seats up for grabs."  AFP explains that the nearly 7,000 candidates includes 2014 women.  THE SIASAT DAILY adds, of the nearly 7,000 candidates, "According to the electoral commission, only 20 percent of the candidates are newcomers." Ali Abdul-Hassan and Sinan Salaheddin (AP) report, "Iraqi women account for 57 percent of Iraq’s population of over 37 million, according to the U.N. Development Program, and despite government efforts to address gender inequality, the situation for Iraqi women has declined steadily since 2003.  According to the UNDP, one in every 10 Iraqi households is headed by a widow. In recent years, Iraqi women suffered further economic, social and political marginalization due to decades of wars, conflict, violence and sanctions."    RUDAW also notes that 60 Christian candidates are competing for the five allotted minority seats.  How do they elect the prime minister?  This comes after the general election and is based on who won seats in the election.   Abdulrahman al-Rashed (AL ARABIYA) explains, "To win the premiership, a candidate needs to win the majority of the votes, i.e. the votes of 165 MPs out of 329. Since it is a multi-party system, it is almost impossible to win these votes without sealing political alliances. The governorate of Baghdad is the most important one because it is the largest with 69 seats."  The chief issues?  Mustapha Karkouti (GULF NEWS) identifies them as follows, "Like in previous elections, the main concerns of ordinary Iraqis continue to be the lack of security and the rampant corruption."  Sunday, RUDAW explained that the electoral commission "so far fined 210 candidates for violations of commission guidelines."


As noted in the April 3rd snapshot, pollster Dr. Munqith Dagher has utilized data on likely voters and predicts that Hayder al-Abadi's Al-Nasr will win 72 seats in the Parliament, al-Fath (the militias) will get 37 seats, Sa'eroon (Moqtada al-Sadr's new grouping) will get 27 seats, Nouri al-Maliki's State of Law will get 19 seats, al-Salam will get 18 seats (KDP and PUK parties for the Kurds), Ayad Allawi's Wataniya will get 15 seats. There are others but Dagher did not predict double digits for any of the other seats. The number are similar for the group of those who are extremely likely to vote (Hayder's seats would jump from 72 to 79 seats).  Other predictions?  The Middle East Insstitute's Fanar Haddad insists to Sammy Ketz (AFP) that the post of prime minister will come down to one of three people: Hayder al-Abadi (current prime minister), Nouri al-Maliki (two time prime minister and forever thug) or Hadi al-Ameria "a leader of Hashed al-Shaabi, a paramilitary network that played a pivotal role in defeating IS. Ameri comes from Diyala province and is a statistics graduate from Baghdad University. He fled to Iran in 1980 after Saddam executed top Shiite cleric Ayatollah Mohammed Baqr al-Sadr. The 64-year old is widely viewed as Tehran's favoured candidate."

Some see Hadi al-Ameria as too divisive to be prime minister yet he possess the key trait required for a prime minister in Iraq.  Andrew England (FINANCIAL TIMES OF LONDON) explains:


Mr Ameri’s links to Iran date to 1981 when he left Iraq to fight Saddam Hussein’s regime in the Iran-Iraq war and helped found the Iran-backed Badr Brigade militia. Badr is the dominant force in the Hashd, which is estimated to have up to 120,000 fighters. He returned to Iraq after the US-led invasion toppled Saddam and paved the way for Iraq’s Shia majority to dominate politics. He became a MP and continued to head Badr at a time when militias proliferated in the post-invasion chaos.


No one who grew up in Iraq is good enough to become prime minister, obviously.  Every person selected has been a coward who fled the country, lived outside of it for years, and only returned after the US-led invasion.  Hadi al-Ameria is just as big a coward as so many others.  He too can represent Iraq today . . . now that others took out Saddam Hussein.

Why do so many do like Nouri al-Maliki and nurse grudges?  Because they are so pathetic -- these grown men -- that they were unable to fight Saddam and had to depend upon fighters from other countries to topple Hussein.  This is an embarrassment and there's no way they can deny reality, so they nurse a grudge and try to punish others the way they wish they had been able to punish.  Impotency, one of the greatest indicators of conflict.

Though 'qualified' by current standards, not everyone's buying a ticket on The Hadi al-Ameria Express.   Ali Mamouri (AL-MONITOR) notes:


With Iraq's parliamentary elections around the corner, the different factions of the Popular Mobilization Units (PMU) grouped under the Fateh coalition banner face great challenges. These obstacles might eventually lead to internal divisions, decreasing the coalition’s chances of victory in the elections, to say the least.
On one level, Ayatollah Ali al-Sistani, the most influential religious and social leader in Shiite circles, opposes PMU participation in the elections, saying the organization’s name is being exploited for electoral gains.
Sistani’s office said in a May 4 statement, “No one is allowed to exploit the religious reference’s title or any other title dear to the hearts of Iraqis for electoral gains,” in reference to the PMU’s victories against the Islamic State (IS).
This is not the first time that Sistani has clearly opposed the PMU’s participation in elections. In his Friday sermon on April 27, Sistani spokesman Abdel Mehdi Karbalai affirmed Sistani’s position and his rejection of candidates who invoke victories against IS in the elections. The PMU was formed following Sistani's 2014 fatwa calling on Iraqis to join the security forces to stop IS after the terrorist organization occupied Mosul and moved toward Baghdad.

Turning to another issue . . .


In #Iraq’s parliamentary elections, we only hear about women in the media, not from themselves. Not a single party has started a major rally led by a female politician.
1 reply1 retweet4 likes

Female candidates have been targeted with smears; however, that's not an excuse for not interacting with potential voters.

Other issues including the continued lack of improvement in Iraq.  ALJAZEERA notes:

The increasing poverty rate is among the campaign issues.
Years of war and political instability have left communities in ruins, and the oil-dependent economy is in decline.

But many Iraqis doubt the election will lead to changes they desire.


With no improvements, many lives are left at risk.  RELIEF WEB notes:

When you spend no money to improve public infrastructure, when poor sewage means that rains result in flooding, you are not protecting the community.  The corruption in Iraq has allowed various officials to get rich while the standard of living and safety has gotten worse.  The flooding should stand as a reminder of how nothing has been achieved year after year.

In other news, Poland's Ambassador to Iraq is already an improvement over any US Ambassador. 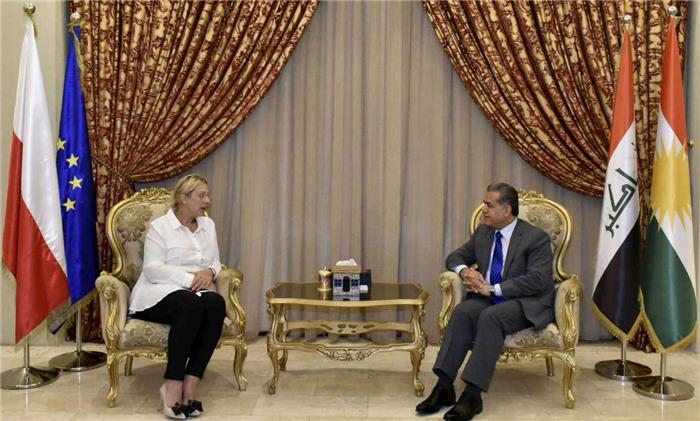 Every time you blinked during Barack Obama's two terms as president of the United States, he was naming another man to be ambassador to Iraq.  Man.  Somehow he couldn't find a qualified woman.  Over and over, he couldn't find a qualified woman.  This despite the changes it might have made in Iraq.  Women's rights were stripped away by the fundamentalist thugs the US put in charge.  Nouri al-Maliki, for example, refused to appoint women to his Cabinet at one point.  A female ambassador could have made a difference.  But Barack always had trouble finding qualified women -- this despite MS. Magazine embarrassing itself by insisting Barack was what feminism looked like.

BREAKING: A federal appeals court has blocked the Trump administration’s bid to transfer an American held by the US military in Iraq since September to another country. 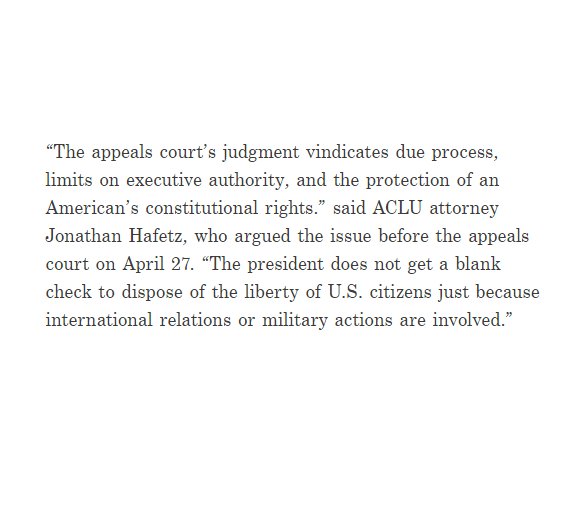