Kropotkin‏ @DoctorKropotkin 8h8 hours ago
Rachael Maddow just said that Trump broke a 70 year tradition of US not talking to dictators. That's how stupid Maddow thinks her viewers are.
53 replies448 retweets705 likes


And the link goes to "US Provides Military Assistanceto 73%  of World's Dictatorships."

Itai Vardi‏ @itai_vardi 1h1 hour ago
Replying to @TimothyS @JohnStauber @maddow
And here’s Carter not talking to Argentine dictator Videla, who was responsible for the torture and murder of tens of thousands. 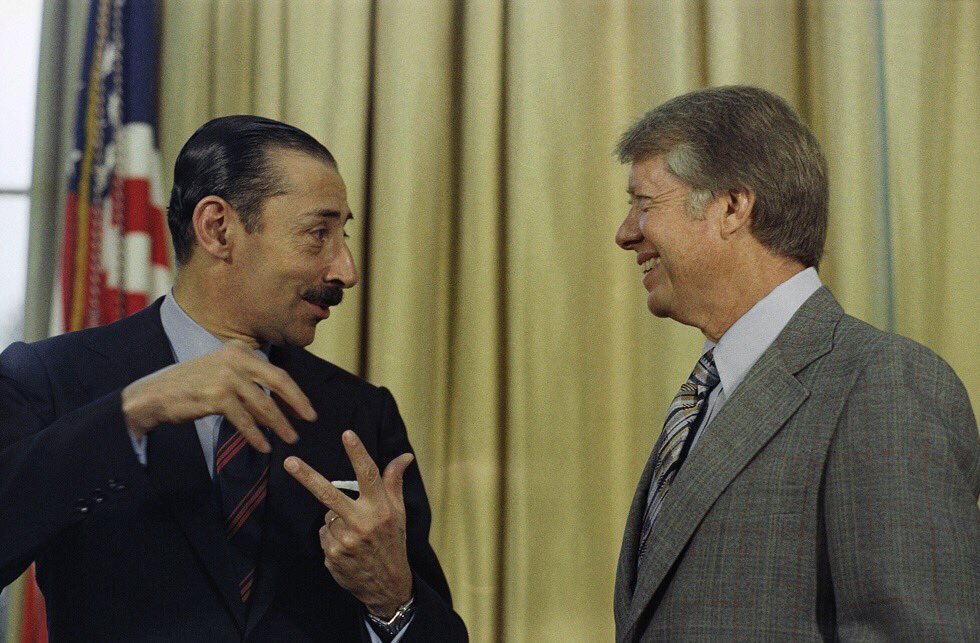 Wednesday, June 13, 2018.  The Atlanta Falcons are going to Iraq, Moqtada al-Sadr out-games the US government and Miss Iraq and Miss Israel reunite.

Atlanta Falcons‏Verified account @AtlantaFalcons 21h21 hours ago
We're set to visit Iraq. We are the only NFL team that will conduct our own @the_USO tour this year. STORY -
48 replies270 retweets1,058 likes

FLOWERY BRANCH, Ga. - The Atlanta Falcons will embark on a USO tour to Iraq to visit active duty service members at three military bases. Falcons head coach Dan Quinn, AMB Group CEO Steve Cannon, kicker , guard  and center  will represent the team, showing their gratitude for the sacrifices that U.S. service members make for the country.
The Falcons are the only NFL team that will conduct their own USO tour in support of the 52nd Anniversary of the partnership between the NFL and the USO.
“We are fired up to have this rare opportunity to show our appreciation for our troops and spend time with them during their deployment,” Quinn said. “We have so much respect for what these men and women do every single day, and I think this is a great opportunity to show our gratitude to all the members of our armed services at these bases.”
The Falcons organization has several deeply-rooted connections to the military.
Quinn, who won the league’s Salute to Service Award in 2016, believes the armed forces do team better than anyone and has said if he wasn’t a coach, he’d be in the military.
Garland, the team’s 2017 Man of the Year recipient, is a 2010 graduate of the Air Force Academy and currently serves in the Colorado Air National Guard, and Cannon is a graduate of the U.S. Military Academy at West Point.
“The USO has a 52-year history of working with the NFL and its teams to support service members and their families. We’re excited to work this year with the Atlanta Falcons to keep our service members in Iraq connected to family, home, and country,” said USO senior vice president of entertainment Lorie Hennessey.
An extension of the NFL’s Salute to Service – the league’s yearlong work to honor, empower and connect service members through the unifying lens of football and strategic partnerships with impact-driven organizations – this tour marks one of many activations that the Falcons host for service members and veterans annually.
In 2017, the team conducted more than 25 military community events such as working with more than 100 Tragedy Assistance Program for Survivors (TAPS) families, engagement with over 500 military service members and veterans during gameday events and positively impacting the lives of close to ten thousand other service members through their community programs.

Yes, US troops remain in Iraq.  The Atlanta Falcons know that, shame so many Americans -- especially those on Twitter -- repeatedly ignore that reality.

Another reality, Moqtada al-Sadr isn't the brash, young fool the US government knew him as in 2006.  The Shi'ite cleric and movement leader has more than just a massive following these days.  Since returning to Iraq January 5, 2011, Moqtada al-Sadr has shown an ability not only to lead mass protests but also to out-game his opponents.

Moqtada has teamed with Hadi al-Amiri and this is a major move.

It's also not a move that he wanted or planned.  In fact, a week ago, he was ready to go forward with another partnership.

Borzou Daragahi  🖊 🗒‏Verified account @borzou Jun 7
Reports from Iraq say Moqtada al-Sadr has formed a 94-seat bloc with Iyad Allawi and Ammar Hakim and will attempt to name a government without PM Abadi or Hadi Ameri. But May 12 election has yet to be ratified, and some calling for a recount. Big mess.
1 reply6 retweets8 likes


But that was when the May 12th vote was accepted and the losers of the vote weren't trying to overturn it.

Now, the top vote getter, Moqtada, has teamed with Hadi al-Ameri whose bloc got the second most seats in Parliament.


First, this move brings Moqtada very close to the 163 seats in Parliament needed to form a government.  By merging with Hadi al-Ameri, there is a combined 111 seats.  52 more seats are needed and that should not be too difficult to pick up.

Moqtada, from April and May of 2011, has political allies in leadership posts of many other blocs.  This would include the KDP (Massoud Barzani) which won 25 seats.  If he were to grab those, the PUK -- which has close links with the Iranian government -- would probably strongly 'suggest' that Jalal Talabani's PUK join with Moqtada as well.  They have 18 seats so that would bring Moqtada even closer to the 163.  (154 would be the total if both the KDP and PUK joined with Moqtada.)  (And the KDP is close with Iran as well.  But the PUK especially owes Iran after the backing and cover the Iranian government provided the Talabanis during the 18 months when Jalal Talabani was unable to speak or move but the Iranian government helped stifle efforts to call for Jalal to be removed from the office of president despite the fact that he could not carry his duties.)

Moqtada's other political allies include Shi'ite Ayad Allawi and Ammar al-Hakim.  Only one need join him and he's reached the 163 mark.

The whole point of the recount calls, for the US government, was to stop Moqtada from becoming a king-maker.  (Moqtada cannot become prime minister of Iraq himself.  He did not run for Parliament.  The prime minister has to be a member of Parliament.)  They griped about Iranian control and other issues.  (Violence was not one of the US government's issues but it never is, is it?  Gripes about Moqtada's refusal to go along with the invasion of his country came chiefly from US veterans.)

So Brett McGurk and US Ambassador to Iraq Douglas Silliman worked very hard to rally support for various plans to wrest control from Moqtada.  That this has been very hard work is evident by the fact that Brett's hairline has crept further back -- and this is a man who had no hair left to lose -- not from the top of his head.


Moqtada read the room and knew what had to be done, team with Hadi al-Ameri.

This has two major results.

The first result is that talk of recounts and revotes -- unconstitutional moves both (per Iraq's Constitution) -- is now even harder to sell.  Had the US government been able to build an alliance with Hadi and Hayder al-Abadi, they might have been able to sell a recount or revote.  They would have had one of the top two winners (Hadi) calling for the move so it wouldn't have just played like the sour grapes of the losers like Hayder.  By teaming with Hadi, Moqtada has presented a united front and the US government better have a plan B because plan A just went up in flames.

The second result?  Brett never was very smart, was he.  He was good looking back when he had a full head of hair.  But pretty is never enough.  The plan Brett has been in charge of didn't just fail today.

Failure would be bad enough.

But this is worse.

Brett's efforts to secure Hayder al-Abadi a second term as prime minister resulted in the teaming of Moqtada and Hadi.  The two had issues and would not have naturally come together.  But now they have.  And grasp this, because the State Dept's already mainlining Tums this morning, Brett's efforts have united the two largest groups calling for all US troops out of Iraq.

And that's the nicest interpretation.

Hadi's group has actually threatened US troops repeatedly in the last two years.

Barack Obama tried to make Brett the US ambassador to Iraq.  It was a stupid move backed by Hillary because she surrounds herself with men who are cheaters (Brett cheated on his first wife while in Baghdad -- among the women he slept with was Gina Chon -- hopefully, Gina, having left her husband to marry Brett, is now aware that she wasn't the only woman Brett was sleeping with in Baghdad).  Thank Democratic senators for blocking Brett's nomination -- especially two women.

Brett's a disaster.  Ayad Allawi may be one of the few Iraqi leaders willing to go public and on the record about Brett but Brett's not respected by anyone.  Even the Kurds make fun of him.

And for good reason, clearly.

Plan A failed.  That was always going to be a possibility.  So why didn't anyone see what could happen if it failed?

It's united the two strongest opponents of the US government.  This is a spectacular failure and a working Congress would be interested in how this was mapped out.


In other news, Sara Idan was Miss Iraq last year.  While competing, she and Adar Gandelsman (Miss Israel) attempted to demonstrate that people can get along and be friends even when governments can't.  This resulted in a series of selfies.  For Sara, it resulted in death threats and having to leave Iraq.  She and Adar have reunited in a series of photos.