Now for the title of my post.  First, I'm Black, if you don't know.

Joe Biden's a racist.  A number of us are noting that and calling him out.

Instead of being allies and friends, a lot of White people are playing like it's 2003 all over again.

We, Black people, remember those days.  We'd be at a site DAILY KOS and we'd have friends and supporters . . . up until the point we noted racism from a Democrat.  Then it was "Shut up!"  Then it was we were being divisive and disloyal.

Joe Biden has done one racist thing after another.  But if we dare to point that out, a mob of White people descend upon us screaming, "Shut up, Black people!''

They then carry out the internet equivalent of a lynching if we don't fall in line.

Joe Biden felt the way to make up for slavery was to send social workers into Black homes because Black people don't know how to parent.

Now I've got three kids but Joe doesn't think I can raise them without a social worker present.

Over the weekend we've learned the tale of Joe and Corn Pop.

Corn Pop was a Black teenager who, in 1962, apparently bounced on the diving board before jumping in and Joe wasn't having it.  Joe called him Ester Williams and banned him from the pool.  Even though a colleague told him he didn't need to worry about Corn Pop (he was all talk, Joe was told), Joe got a six foot chain to go out and meet Corn Pop.

He's racist and he needs to go.


And don't pretend you give a crap about Black lives or about Black people if your response to all of this is: 'We have to unite!'

Not behind a racist we don't.

It's not 2003 and, sorry, you don't control the conversation.

And it's time for our Black elders to start standing up with us and saying this is not acceptable.


Drone strikes on key oil facilities in Saudi Arabia on Saturday by Yemen’s Houthi rebels have triggered concerns about a potential major disruption in global oil supplies and a spike in oil prices. The attack, in retaliation for the brutal Saudi-led and US-backed war on Yemen, has sharply raised regional tensions and heightened the danger of a US war on Iran, which Washington accuses of backing the Houthis.
Houthi spokesman Brigadier-General Yahya Sare’e told the media that its forces had “carried out a massive offensive operation of 10 drones targeting Abqaiq and Khurais refineries.” Hijra Khurais is Saudi Arabia’s second largest oil field producing about 1.5 million barrels of oil a day, and Abqaiq is the world’s largest crude stabilisation facility, processing some 7 million barrels of oil for export.
While Saudi authorities insisted that fires at the two sites were under control, Saudi’s state-owned Armco oil company suspended production at the facilities, cutting output by about half. The price for Brent crude oil, the international benchmark, shot up by almost $12 a barrel to $71.95 a barrel, before easing to $68 a barrel, up by more than 12 percent.
The Trump administration immediately blamed Iran for the drone strikes. US Secretary of State Mike Pompeo tweeted that “Tehran is behind nearly 100 attacks on Saudi Arabia… Amid all the calls for de-escalation, Iran has now launched an unprecedented attack on the world’s energy supply. There is no evidence the attacks came from Yemen.”
Pompeo provided not a shred of evidence for any of his allegations, simply asserting that the Houthi rebels did not have the ability to carry out such a sophisticated attack. To date, Saudi authorities have provided few details of the strikes and have not attributed blame to regional rival Iran. Pompeo’s provocative remarks undermine the possibility of talks between the US and Iran.


Rattle the sabers! Beat the drums! Empire's what this country runs on!

Following Saturday’s drone attack on Saudi Arabia, Iraq’s government has issued a statement denying that there was any link to Iraqi soil and the attack, saying its territory had not been used in any way in the attack.

Moreover, the statement vowed to “punish anyone who intended to use Iraq as a launchpad for attacks in the region.”

Indeed there doesn’t appear to be any publicly available evidence of Iranian involvement, while Yemen’s Houthi movement, the most probable culprit, openly admits to having carried out the attack themselves. Pompeo says there is “no evidence” the attack came from Yemen, suggesting that North Yemen’s largest faction flat out saying they did it doesn’t count as evidence to him.

A commander for the Iranian Revolutionary Guard also suggested if Iran wanted to attack something, it wouldn’t be some Saudi refinery, noting that a number of US military bases and aircraft carriers are well within range of Iranian missiles. He added that Iran has long prepared for a full-fledged war, suggesting Iran is ready to respond if the US uses this as a pretext for war.

The paramilitary Hashd Shaabi forces on Sunday opened fire on an unidentified drone as it flew over its headquarters in Iraq's central province of Salahudin.
The anti-aircraft weapons of the Hashd Shaabi's 41st and 43rd brigades fired at the drone after they confirmed that the drone is unknown even for the Iraqi Joint Operations Command, according to an online statement by the Hashd Shaabi.

The statement did not say whether the drone was shot down or fled the area. However, a video clip published by a Hashd Shaabi website and local media showed a small plane flying far away in the sky while an anti-aircraft machinegun was firing a series of bursts.

In other news, INTERNATIONAL QURAN NEWS AGENCY reports that Iraq's military has begun 'cleansing' the suburbs of Mosul of terrorists -- this after claiming in 2017 to have liberated Mosul from ISIS.

Iraqi women posing on steps of presidential palace after working with President @BarhamSalih on landmark draft bill to criminalize domestic violence. Controversial in #Iraq, the bill would end protection for assault within families and allow safe houses for victims of violence.

At #Iraq's presidential palace. President @BarhamSalih after meeting today on groundbreaking draft law that would criminalize domestic violence. The bill would end legal protection for domestic violence and - hugely important - allow safe houses for women and others fleeing abuse 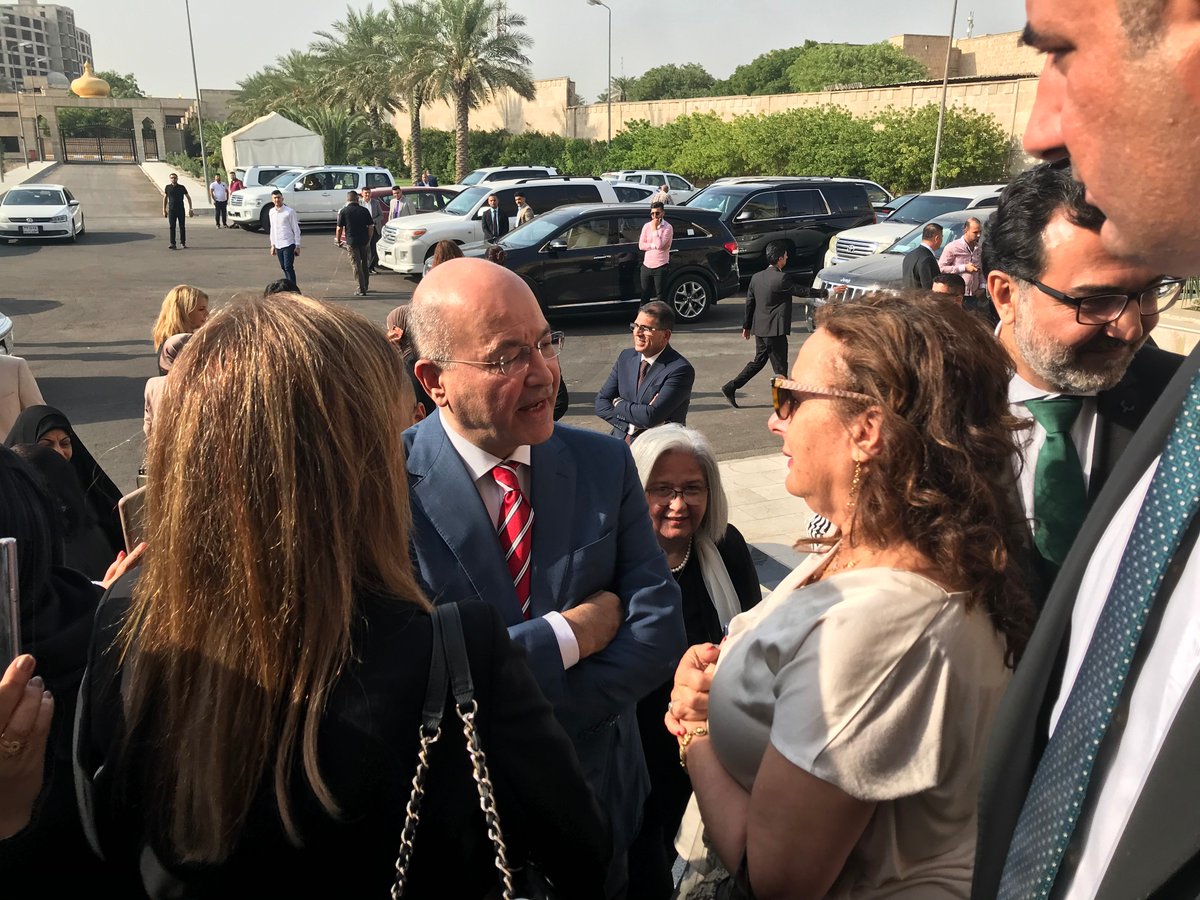 Replying to @ReginaA1981 @Anosognosia1 and

Civility police. Same old BS. All people of color raised by people of color know we can't get away with the same actions as white people. Castro was right. Biden contradicted himself about Biden's own healthcare policy.
0 replies0 retweets1 like


Replying to @LunaIssy @MalaikaJabali @DrRJKavanagh
What an elitist and privileged thing to say. "Let's not worry about how racist this guy is, let's focus on getting the other racist out first!" Ok so by your strategy what exactly do POC win if Biden does? #WhitePrivilege
1 reply0 retweets4 likes

mpendakur Retweeted Charles M. Blow
Essential reading to understand Biden! The old guard in the African American community may support him but his record on racial injustice speaks volumes! Obama shouldn’t have picked him as his VP. Biden didn’t deserve it. Another illustration of how white privilege works!
mpendakur added,


Replying to @Hlg69 @JulianCastro
Welcome to America. That's not a Biden specific issue. That's a white supremacy and white privilege issue. He is going to use white privilege when he can as will his white supporters and the white media.
0 replies0 retweets0 likes

Joe Biden is white supremacist lite for people who still actively want to benefit from white privilege but don’t want to see how the sausage is made. They don’t want any actual progressive reform, they just want systemic violence to become politely invisible again.
0 replies0 retweets2 likes


Biden never apologized for saying that the segregationist wouldn't have called him "boy" (racial slur) but son. When booker brought it to his attn he said the black man should apologize to him. He never apologizes. He apologized for working w/ them. White privilege at it's best.
0 replies1 retweet3 likes


This narrative we must accept Joe Biden racist comments because Trump need to be defeated is drenched in white privilege. I will not ignore racism because we must win an election, that's a luxury my people cant afford. I will still be Black after Trump 4 or 8 years in office.
4 replies19 retweets58 likes


Wouldn’t it be bold and progressive if @ewarren issued a statement in support of @JulianCastro re: his calling out Biden’s misrepresentation of his own statements? This is an opportunity for her to use her white privilege for good. I would honestly make a donation to her.
1 reply0 retweets3 likes


The anger at @JulianCastro is disgusting. He called out a legit issue with Biden. If Biden can’t take the heat then he shouldn’t be the nominee. There’s also an obvious tinge or racist white privilege - defending a white dotard bc a PoC called him out.
0 replies0 retweets1 like

There's the world the media misrepresents and then there's the real world.  The media never saw Donald Trump coming.  I called it for Trump in September of 2016.  The difference is I'm not living in a bubble.  I'm going around the country every week speaking.  I hear what people are saying.  And you're kidding yourself if you don't see that Joe Biden is in serious trouble over his racist remarks as well as over his White privilege brigade rushing out to defend him and attack Julian Castro.

Must be nice to live in a reality in which racism in America started with Trump and you can afford to pretend not to see low-key racism in people running against Trump because Trump is your only problem.
96 replies532 retweets3,027 likes

People need to be listening right now.  It doesn't matter what you think, honestly.  This is how Joe is being seen and you need to register it regardless of what you think.  How important is this issue to me?  I'm about to piss off Jim.  I'm sick, I've got a nasty cold.  But Ava and I wrote our piece for THIRD late Saturday night so it could go up because it's an important topic -- it's largely about this topic.  And, hold on a second, because I'm gong to log onto a computer and publish it (the snapshot is dicated).

Alright, it's up: "TV: Biden and Handler privilege" and it addresses the reality that no one wants to talk about.  How Joe violated the rules of the debate -- they were noted by David Muir at the start.  How Joe had spoken of healthcare first and then had been allowed three rebuttals.  It was finally Julian Castro's turn to speak for the first time on the topic and Joe, in violation of the rules, interrupts Julian's time to speak for his fifth time.

It's White privilege, stop pretending otherwise.  The Anglo White media started whining about tone and fairness but they never seemed to grasp that Joe was in violation of the rules, outlined at the star of the debate by Muir, and that Joe interrupted Julian's time.  Joe did that throughout the debate.  Despite Muir declaring that those who interrupted would have time taken from them, no punishment for Joe.  He was rude and entitled and it's about damn time the chatty Anglo White pundits explained why they never bothered to note that Joe speaking during Julian's turn was a violation of the rules.