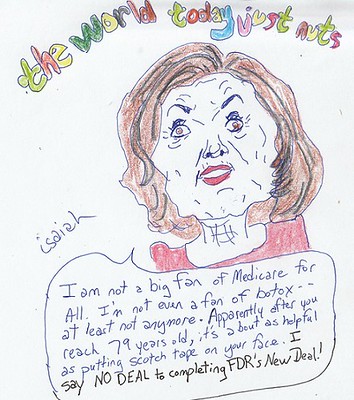 Please read Stan's "CHARLIE'S ANGELS" from last night. Elizabeth Banks crashed and burned with CHARLIE'S ANGELS and somehow that is everyone's fault but her own. Somehow she's the victim.

CHARLIE'S ANGELS has a built-in audience and it appears everyone of those people bought a ticket. That's all that happened. She (Banks) made no effort to make a film that reached out beyond the built-in audience. The trailer was dull. The songs were awful -- that includes the mechanical version of Donna Summer's "Bad Girls" which took a vocal line by Donna and then broke it up between thump-thump droning music for 30 seconds or more before doing another vocal snippet.

Elaine called that remix out here.

Everything was misguided. And, no, we don't need an empowerment message passing itself off as a storyline. Has Elizabeth Banks never heard of Joseph Campbell? Clarice in SILENCE OF THE LAMBS is a hero and she is a hero because of all that she overcomes. Watching that can be empowering, yes, but that's not the point. There's an actual storyline.

I saw the film. I tried to drag my teenage daughter to it and she was all, "Uh, no. Just no."

That's all on Elizabeth.

In the US, the race for the Democratic Party's presidential nomination continues and War Hawk Joe Biden thinks he has some authority with which to speak from.  He doesn't.  Ryan Saaverda (THE DAILY WIRE) reports:


Combat veterans have lashed out at 2020 Democratic Party presidential candidate Joe Biden over the last 24 hours after Biden falsely declared that President Donald Trump’s decision to pardon members of the U.S. Armed Forces “betrays the rule of law.”
“Trump’s intervention in the American military justice system to pardon service members accused or convicted of war crimes betrays the rule of law, the values that make our country exceptional & the men and women who wear the uniform honorably,” Biden tweeted. “He is not fit to command our troops.”
[. . .]
Robert J. O’Neill, the Navy SEAL who killed Osama bin Laden, responded to Biden: “You said ‘no’ to the bin Laden raid. Then you announced ‘SEAL Team Six’ when we did it. I still had my body armor on when you turned my life around. How dare you…”


That's very important and it's important for a number of reasons.

First, Joe presents himself as the guy who is going to pull a miracle out of his ass by bringing over Republicans and conservatives to vote for him because he's so 'reasonable' (craven) and that's not reality.  It's never going to be reality.  Joe has no natural constituency except for the corporate press.  The right doesn't love him, they don't even like him.

His words are actually shameful.

If Elizabeth Warren or Bernie Sanders had said them, that would be one thing.  They didn't vote for the war.

Joe is the last one to criticize any service member who served in Iraq.

He sent them to serve.

He should be on his knees begging the country for forgiveness, not finger pointing at a few service members who were only in Iraq because of people like himself.

My view on pardons is well known and consistent.  Pardon whomever you want.  It's a presidential power.  I think, on the left, we get too outraged and then we've backed ourselves into the corner when some centrist supposedly on our side is president and refuses to pardon someone we want pardoned.

I'm not having a fit over the pardons and, unlike Joe Biden, I actually give a damn about Iraq.

Another reason I'm not having a fit over the pardons is because it's the Joe Bidens who need to be in prison, not the young Americans we sent into an illegal war in Iraq. [Mathew L. Golsteyn is an Afghanistan War veteran as is Clint Lorance; Eddie Gllagher is a veteran of both the Afghanistan War and the Iraq War.]


Another reason goes to Joe Biden's dirty hands with regards to Iraq.  Let's drop back to the June 9th snapshot:

This morning the New York Times' Alissa J. Rubin and Michael Gordon offered "U.S. Frees Suspect in Killing of 5 G.I.'s." Martin Chulov (Guardian) covered the same story, Kim Gamel (AP) reported on it, BBC offered "Kidnap hope after Shia's handover" and Deborah Haynes contributed "Hope for British hostages in Iraq after release of Shia militant" (Times of London). The basics of the story are this. 5 British citizens have been hostages since May 29, 2007. The US military had in their custody Laith al-Khazali. He is a member of Asa'ib al-Haq. He is also accused of murdering five US troops. The US military released him and allegedly did so because his organization was not going to release any of the five British hostages until he was released. This is a big story and the US military is attempting to state this is just diplomacy, has nothing to do with the British hostages and, besides, they just released him to Iraq. Sami al-askari told the New York Times, "This is a very sensitive topic because you know the position that the Iraqi government, the U.S. and British governments, and all the governments do not accept the idea of exchanging hostages for prisoners. So we put it in another format, and we told them that if they want to participate in the political process they cannot do so while they are holding hostages. And we mentioned to the American side that they cannot join the political process and release their hostages while their leaders are behind bars or imprisoned." In other words, a prisoner was traded for hostages and they attempted to not only make the trade but to lie to people about it. At the US State Dept, the tired and bored reporters were unable to even broach the subject. Poor declawed tabbies. Pentagon reporters did press the issue and got the standard line from the department's spokesperson, Bryan Whitman, that the US handed the prisoner to Iraq, the US didn't hand him over to any organization -- terrorist or otherwise. What Iraq did, Whitman wanted the press to know, was what Iraq did. A complete lie that really insults the intelligence of the American people. CNN reminds the five US soldiers killed "were: Capt. Brian S. Freeman, 31, of Temecula, California; 1st Lt. Jacob N. Fritz, 25, of Verdon, Nebraska; Spc. Johnathan B. Chism, 22, of Gonzales, Louisiana; Pfc. Shawn P. Falter, 25, of Cortland, New York; and Pfc. Johnathon M. Millican, 20, of Trafford, Alabama." Those are the five from January 2007 that al-Khazali and his brother Qais al-Khazali are supposed to be responsible for the deaths of. Qassim Abdul-Zahra and Robert H. Reid (AP) states that Jonathan B. Chism's father Danny Chism is outraged over the release and has declared, "They freed them? The American military did? Somebody needs to answer for it."


"Somebody needs to answer for it," declared the father of Danny Chism.

No one ever did.

Joe wants to be president in 2020?  It's time he answered for that idiotic deal that didn't benefit America one bit.  And for a deal that turned Qais al-Khazali into a political force in Iraq.

There's also a point to (again) make that veterans are not a monolithic group.  And also the point that the centrist left worships the military when it suits their purposes. They whine and scream over any criticism of a veteran (or a veteran's father) if the veteran endorses some centrist candidate.  Not fair, they scream, not fair!

But they don't like US House Rep Tulsi Gabbard so they -- and their centrist queen -- think it's okay to lie and smear her as a tool of Russia.  Was she also a tool of Russia when the US government deployed her to a war zone?


Protests in Iraq’s southern Shiite-dominant provinces have garnered scant media attention despite thousands taking to the streets and the attendant deaths of a number of protesters and security forces. The situation escalated in the southern Iraqi province of Dhi Qar Nov. 17, with security forces shooting live ammunition to disperse protesters.
​Dozens have lost their lives in Nasiriyah, Al-Monitor learned during a visit to the city Nov. 9-10. Several activists said they are restricting their movements due to fear of arrest.
The road from Baghdad to Nasiriyah, the capital of Dhi Qar province, is flanked by wide, flat, colorless expanses on both sides. The crossing of camel herds occasionally holds up traffic.
Not far from the city is the notorious maximum security prison known as al-Hoot, or the Whale, where some of Iraq's most dangerous criminals are detained and others are hanged. Human rights groups have criticized the prison for its human rights violations.
The risk of being charged under the country’s widely applied terrorism laws is a huge concern of protesters. Many are more afraid, however, of armed groups answering to “parties” instead of the central government.
Protesters in Nasiriyah's main square refuse to name these “parties,” but they say “everybody knows who they are.”
Ali, a 51-year-old government employee, said that people in the area are referring to the Badr Organization and Asaib Ahl al-Haq, both Iran-backed armed groups that are partially incorporated into the government.

In Baghdad’s Sadr City, I met an unemployed day laborer in pants several sizes too big. He was engaged to be married, but couldn’t gather $2,000 for a wedding party. After going begging at the office or home of every major politician who lived in Baghdad, he had come away without a dinar. These are people who had been willing to pull together, defer their dreams, and even die—under Saddam, during the American invasion and occupation, during the sectarian civil war of 2006, during the time of Al Qaeda, during the war with the Islamic State. Now, they realized they were living in a country that in a time of peace was pumping 5 million barrels of oil per day; by all expectations, Iraq should be rich and modern. Where was their share? Where were their rights? Why couldn’t they live with a modicum of dignity?
#Iraq: 6 killed as #terror bomb explodes amid anti-government protests in Tahrir Square.
0 replies0 retweets0 likes

A protester in Baghdad rejects U.S. and Iranian influence #iraq_protests .. 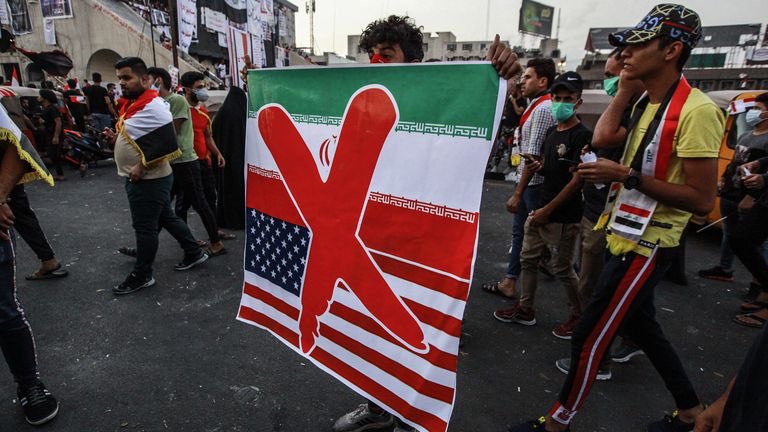 #Iraq_protests paint to send it as a message to the #world because of their silence.

According to two Iraqi experts in modern history of the country, what is happening now of national unity hasn't happened for decades, this time so remarkable, but also there is a margin of risk of fall at some point due to lack of independent society elite with same enthusiasm
० replies३ पुन्हा ट्विट्स११ पसंत्या

Iraqis who do not participate in the protests, didn't get space in media coverage, i asked many about their feelings, they have mixed feelings of hope, fear & uncertainty, many of them their works has damaged, but most of them are happy with the protests & satisfied though
१ reply४ पुन्हा ट्विट्स१० पसंत्या


The rise of Iraqi national unity now is the highest for decades, in country use to divided, I asked many Iraqis(but not who participate in the protests) about their feelings? Answers:-every day is like National Day. Photos: in #Karrada, early Christmas tree decorated w Iraqi flag 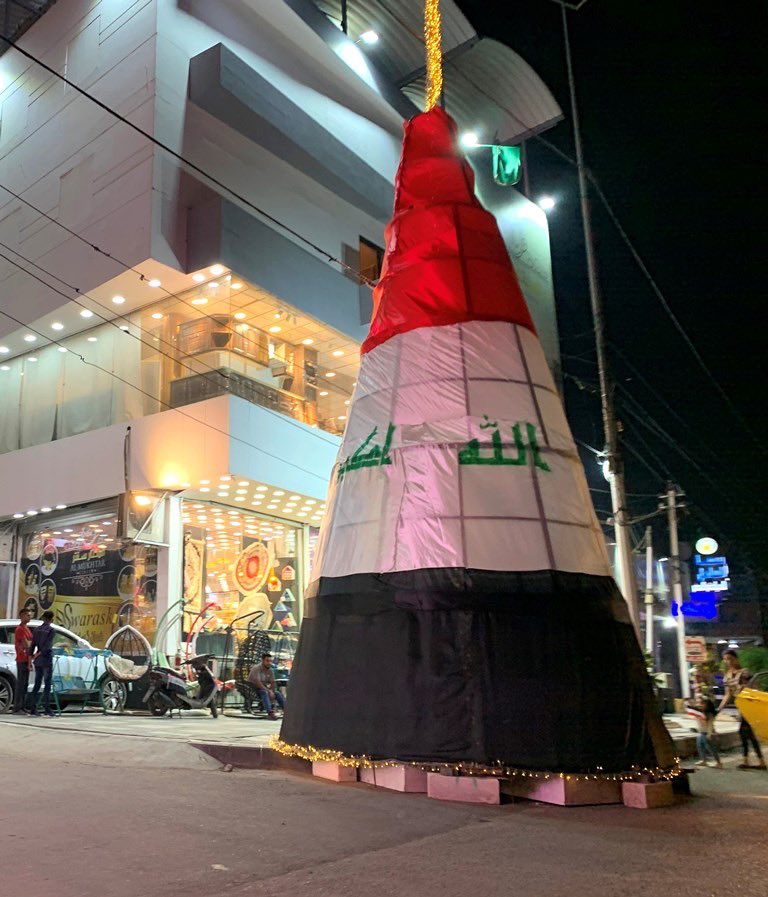 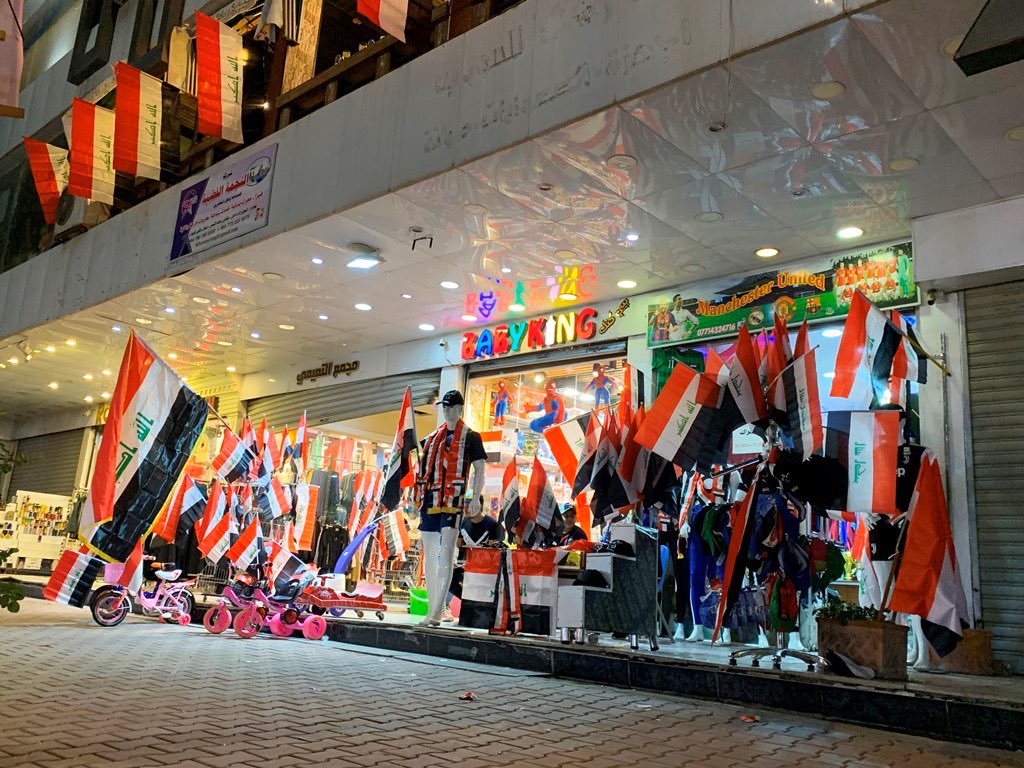 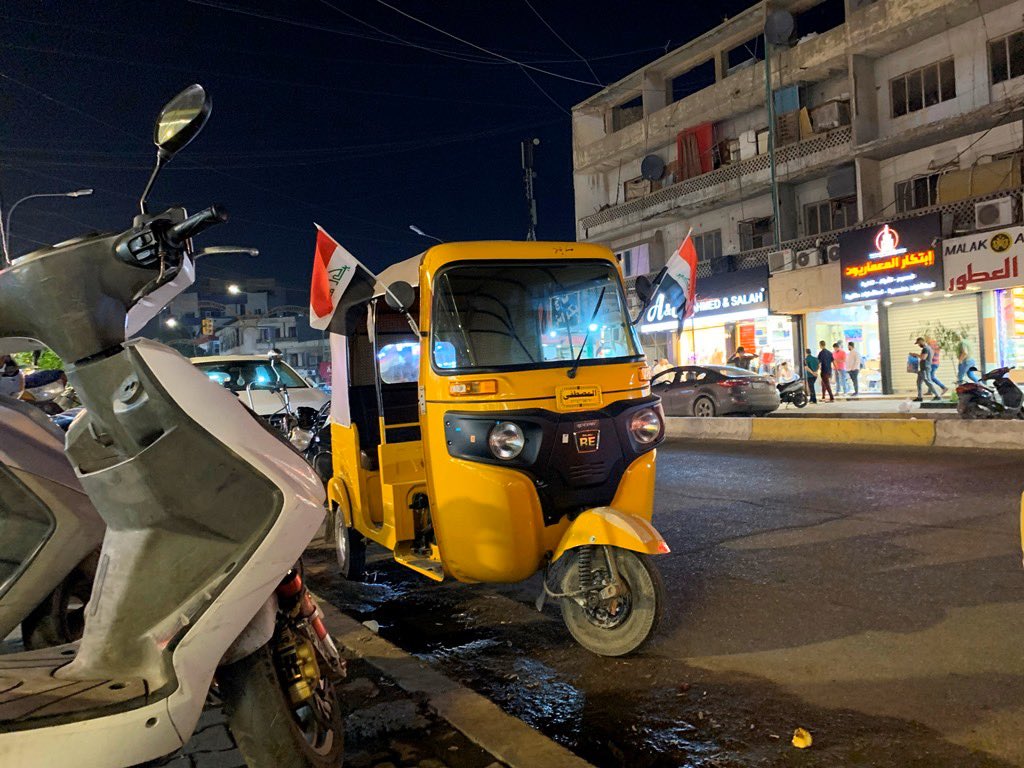 At MARKETWATCH, they speak with a 19-year-old artist who notes that jobs are hard to find and "we are doing the protests because we want a better future."  She painted a violin and "the strings of the violin are gun shots to represent the killings they are doing.  The violin represent beauty."