He raped a woman, that's part of his story and it always will be

Please read "Remembering fallen rapist Kobe Bryant and standing with Felicia Sonmez" and grasp how disgusting THE WASHINGTON POST is.  They have suspended their reporter Felicia Sonmez for Tweeting on Sunday -- two Tweets -- about Kobe Bryant's rape case.

渡邉葉‏ @YoWatShiinaEsq 33m33 minutes ago
Washington Post @washingtonpost I'm disappointed about what you did re: #FeliciaSonmez https://washingtonpost.com/opinions/2020/01/27/posts-misguided-suspension-felicia-sonmez-over-kobe-bryant-tweets/ … Kobe's achievement stands, WITH his self-admitted mistake. It's worth knowing. #WaPo ....Do you not realize you are stifling the very foundation you stand upon?
0 replies0 retweets2 likes

M. K. Fain‏ @mkay_fain 44m44 minutes ago
This is appalling. The @washingtonpost should be ashamed of themselves right now. I support @feliciasonmez and rape survivors. It shouldn't matter how famous the rapist is.
1 reply4 retweets7 likes
Show this thread


Exactly, truth is worth fighting for.  Shame on THE WASHINGTON POST for attacking their own reporter.

Kobe's a rapist.  Because he was a famous basketball player doesn't change that.  I'm sick of women being treated as not mattering.

I have a daughter, I will not stand for the notion that women don't matter.

A man died.  Boo hoo.  He raped a woman, that's part of his story and it always will be.

If he had robbed a bank or killed a man, it would be news when he died.  It's only when the crimes are against women that pig boys demand we stay silent.


Monday, January 27, 2020.  Bernie Sanders leads in Iowa poll, Joe Biden continues to think he can lie his way out of his decades of attacks on Social Security, Moqtada al-Sadr reveals himself to be no leader, and much more.


Starting in the US where the race for the Democratic Party's presidential nomination continues.  Next Monday (February 3rd), Iowa kicks off the contests with its caucus.  Currently?  Bernie Sanders is in the lead by a significant margin.


In a primary, you vote on a ballot and you vote once.  In a caucus?  You go to your precinct but there are no paper ballots.  You vote physically by where you stand -- in which candidate's area.  In addition, there can be multiple rounds.  After the first round, a candidate's campaign can release its supporters so that they can move to a different candidate.  In addition, a voter can decide to move all on their own.

Joe Biden's best chance would be to offer something to another candidate.  But who?  Senator Amy Klobuchar would be his best bet due to their relationship; however, Amy needs as strong a showing in Iowa as possible to stay in the race so Joe would have to offer a great deal to get her to go along with sending her supporters to him.

As Iowa becomes more and more of a problem for Joe, he still hasn't figured out how to address his efforts to cut/gut Social Security over the years.  In fact, he appears to believe this is just another issue he can lie his way out of. 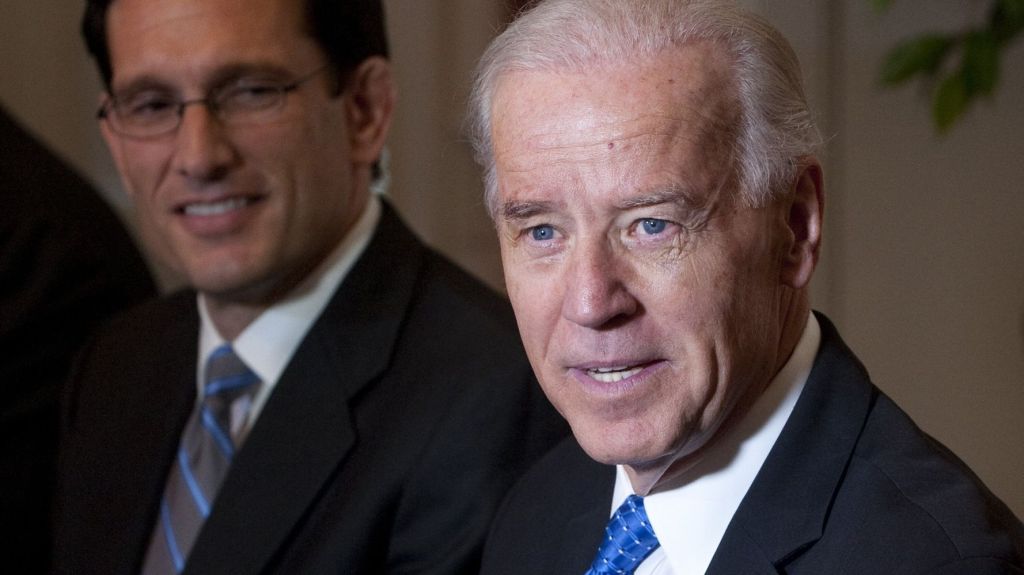 Dear @JoeBiden: If you want to Cut something...

Cut your crap. #SocialSecurity is

sustainable. Your endless #wars are what is not sustainable. #Bernie2020
19 replies284 retweets826 likes

Warren Gunnels‏ @GunnelsWarren Jan 24
Warren Gunnels Retweeted Ryan Grim
"When I argued that we should freeze federal spending, I meant Social Security, as well. I meant Medicare & Medicaid. I meant veterans benefits...And I not only tried it once. I tried it twice, I tried it a third time & I tried it a 4th time," Joe Biden #RollTheTape
Warren Gunnels added, 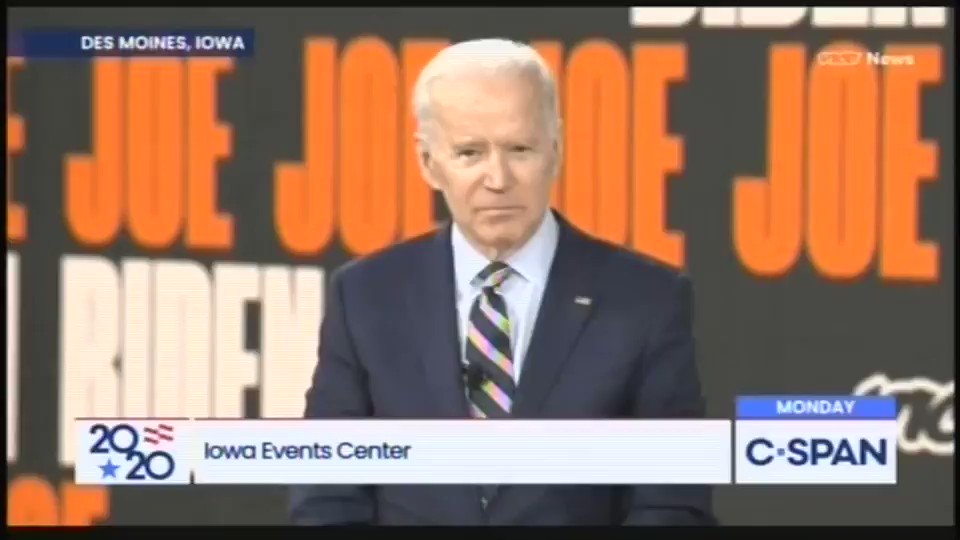 0:23
Trent SpinerVerified account @TrentSpiner
Joe Biden spent two days in New Hampshire without taking a single question from a voter during a public event and walked past the national media who waited by his car to ask questions for about an hour and a half. …
Show this thread
64 replies608 retweets2,625 likes

Shaun King‏Verified account @shaunking Jan 25
Shaun King Retweeted 29 U.S.C. § 157
Joe Biden went all over the world bragging about how hard he tried to cut Social Security and Medicaid. This is in China as Vice President. Now he denies he ever said this.
Shaun King added,

2:09
29 U.S.C. § 157 @OrganizingPower
NEW: video of a speech Biden gave in 2011 in China, in which he explains his role in negotiating a “tentative agreement” with Republicans to cut “entitlements” like Social Security and Medicare, to “reduce the deficit.” …
56 replies428 retweets1,100 likes


New: Joe Biden touts his experience as a deal maker. During the Obama administration, he tried to cut a budget deal with Republicans that might have cut Social Security. @arthurdelaneyhp and I have the details of the 2011 talks: huffpost.com/entry/joe-bide… via @HuffPostPol
0 replies4 retweets5 likes


@JoeBiden Stop lying about your awful record. You wanted to cut social security. Your lame excuse about it being "20 years ago" is inexcusable. You lied then and you lie now. I'm a millennial...I grew up on the internet. We're not stupid Joe. We see you.

Sunday saw five rockets hit inside the heavily fortified Green Zone in Baghdad.  REUTERS noted, "Security sources told Reuters that at least one rocket landed inside the U.S. embassy compound and wounded three people. If confirmed, it would be the first time in years that such attacks on the Green Zone, which are regular, have actually hurt staff there." XINHAU reports:


The Iraqi Foreign Ministry said on Monday that the overnight rocket attack on the U.S. embassy in central Baghdad will not affect the flourishing level of strategic relations between Baghdad and Washington.
A statement by the ministry expressed Iraq's keenness on bilateral relations and mutual interests with the United States, and confirmed the ministry's categorical rejection, and its condemnation of the attack that targeted the U.S. embassy with Katyusha rockets.

"The Iraqi security authorities have launched an investigation to identify the perpetrators and bring them to justice, and in order to prevent the recurrence of such violations, which could lead Iraq to be a battleground for external parties," the statement said.


In Iraq, the protesters suffer as well.  Over 600 have been killed.  The biggest development in the last few days has been Moqtada al-Sadr's walking away from the protesters on Friday evening.

A lot of people are puzzled.  Some are outright wrong.  Mustafa Habib is outright wrong.  He's insisting that Moqtada is this and that and if you were only in Iraq you would see this -- blah, blah, blah.  Fact: We were right on the ongoing demonstrations and Mustafa was wrong.  Fact: It's good for a reporter in Iraq to praise Moqtada instead of risking his wrath.  I don't know why Mustafa's wrong, I just know that he is.  Maybe it's just because he's never understood the protests to begin with?  Weren't they supposed to have faded back in October?  Wasn't that his 'reporting' back then?  I like Mustafa but when he starts peering in that crystal ball of his to justify politicians, I lose all interest.


Populist cleric Moqtada Al Sadr has turned against the Iraqi uprising, withdrawing protection to demonstrators and strengthening a government crackdown to crush the protest movement.
The uprising, which is demanding the removal of the entire political class, has undermined the influence of Iran, Mr Al Sadr’s patron.
In the past three days, attacks by security forces and Iran-backed militia, who overran protest centres in Baghdad and other cities in the south, killed at least 17 civilians and wounded 250, civil activists and the Iraqi High Commission for Human Rights said.
The attacks came after Mr Al Sadr said on Friday that he would no longer interfere in the protest movement.
Pro-Sadr militiamen, who had provided limited protection to the demonstrators, particularly in Baghdad and Basra, withdrew from the streets.

The demonstrations also denounced what many Iraqis regard as Iranian tutelage, in contrast to the narrative of Mr Al Sadr and other pro-Iran politicians, who blame Iraq’s ills on the US.


A leader in Iraq’s populist cleric Muqtada Al-Sadr’s movement, Asaad Al-Nasiri, yesterday split from the movement announcing his support for thousands of anti-government protesters.
On Saturday, Al-Sadr ordered the freezing of Sheikh Asaad Al-Nasiri’s membership in the body for disobeying orders to stop involvement in the anti-government protests.
Al-Nasiri, who is close to Al-Sadr, said in a statement: “I will take off the turban for the love of Iraq and the city of Nasiriyah and the revolutionaries, and I am with the Iraqis.”
This is the first split in Sadr’s movement following its leader’s decision to end the movement’s involvement in the protests.


Friday, Moqtada has his cult bussed into Baghdad -- yeah, it's a cult.  For awhile there, Moqtada was building a movement.  But he trashed that.  Now he'd announced his 'million man march' (originality has never been Moqtada's strength) a week prior to it taking place.  Protesters who had been protesting for months were dismayed and stated that publicly.  They were trying to address Iraq's problems.  They want all foreign troops out of their country.  But the deadline was approaching, for a new government, and they felt Moqtada's latest move would distract from their months long efforts.

There are some who argue that's why Moqtada staged the march.  As a leader or 'leader' of the ongoing protests, he was revealed to be a failure.  The government wasn't listening to Moqtada.  The argument goes that he bailed on the protesters so that he could pretend they were the failures and not him.

At any rate, he bailed on them.  And he lost his power.  He might regain it.  He might not.  Right now, he's a pathetic individual.  He's insulted the protesters because some of them denounced his march -- he's insisted that they are paid tools of the US government.

Over 600 of them have been killed by security forces and Moqtada hurls that blood libel?


At best, Moqtada is currently irrelevant.  At worst, he is a direct threat to the safety of the protesters.

Tarik Larson‏ @TarikLarson 7h7 hours ago
After burning their tents by the militias lastnight, Iraqi protestors in #Nasiriyah start building rooms of bricks instead to show defiance to the insurgents. Protests go on until all demands are executed. @UNIraq @washingtonpost @hrw @CNN @SecPompeo @MPPregent #IraqProtests 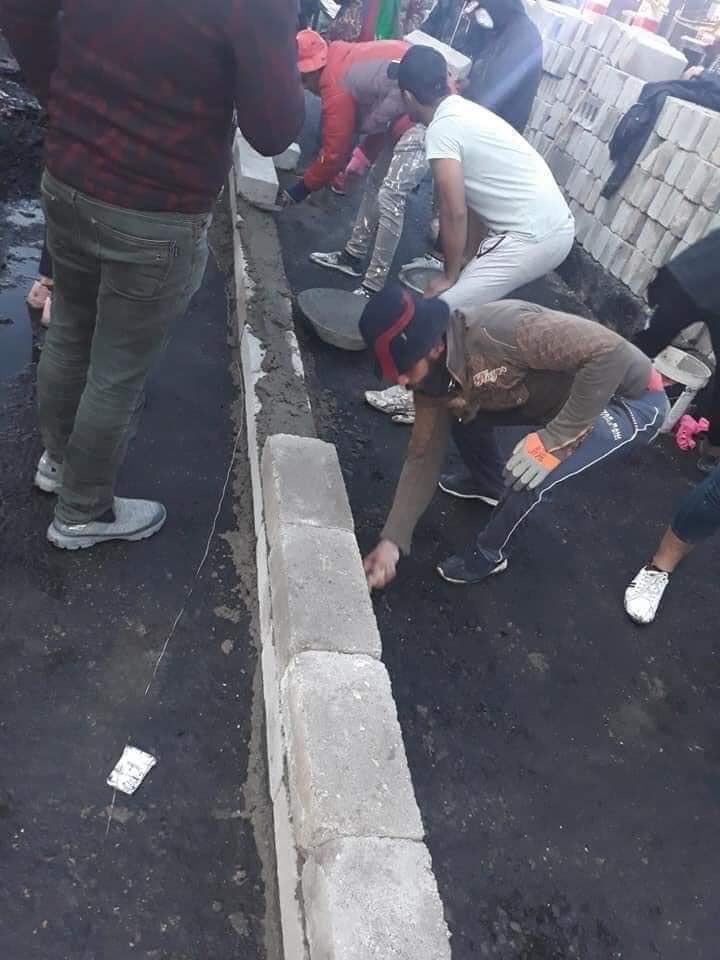 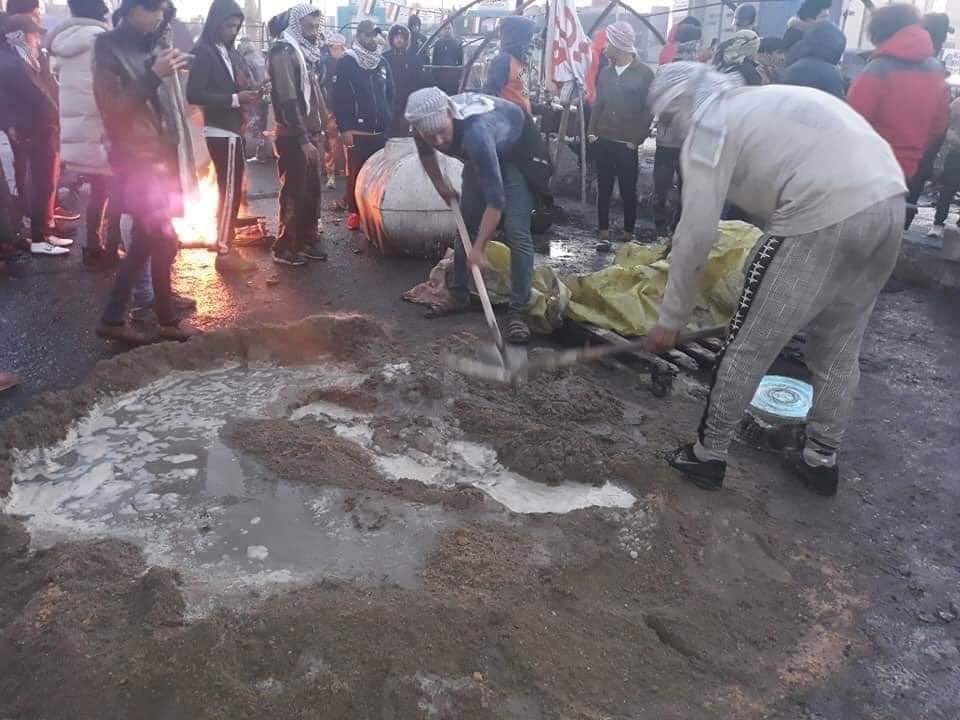 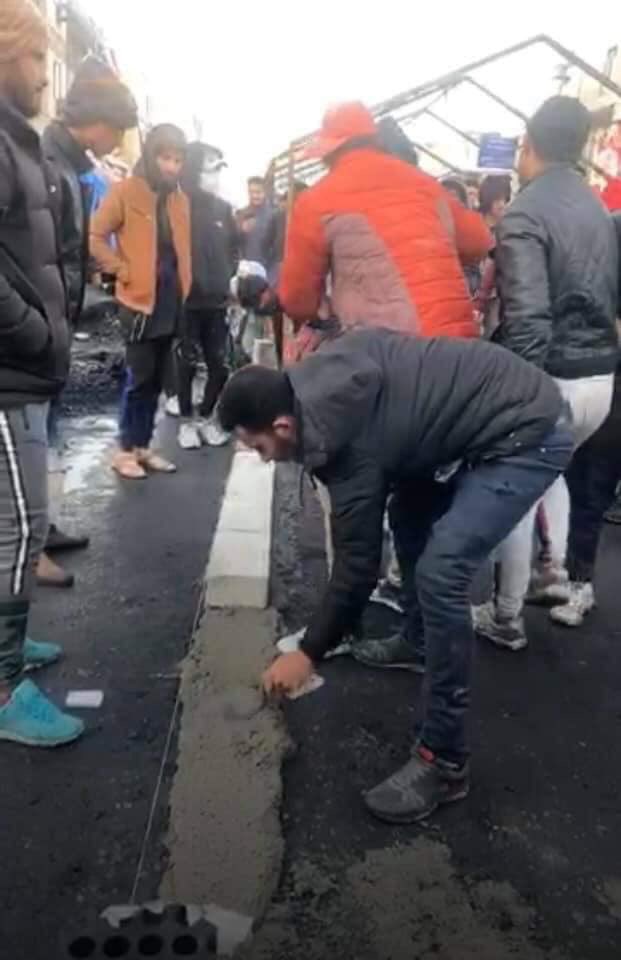 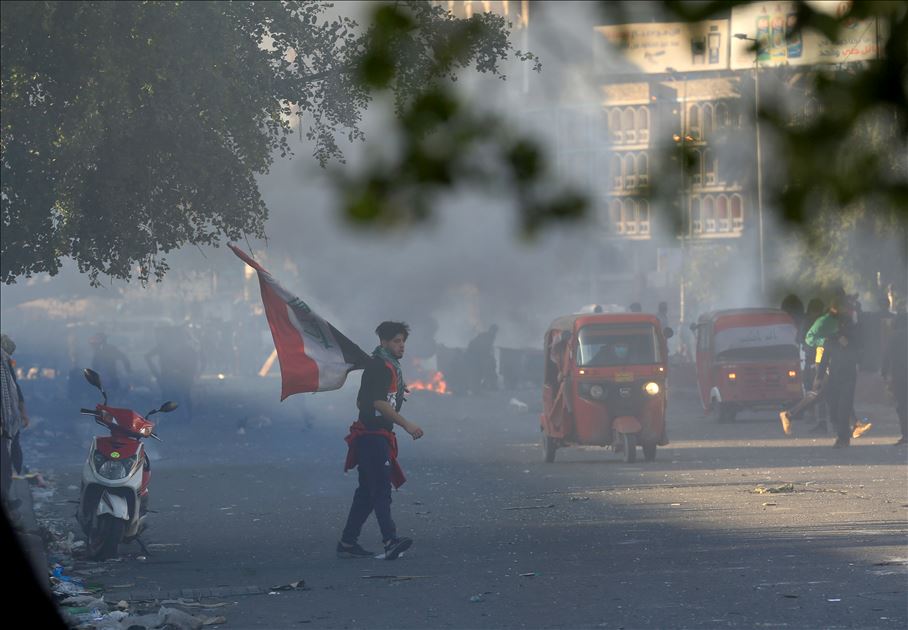 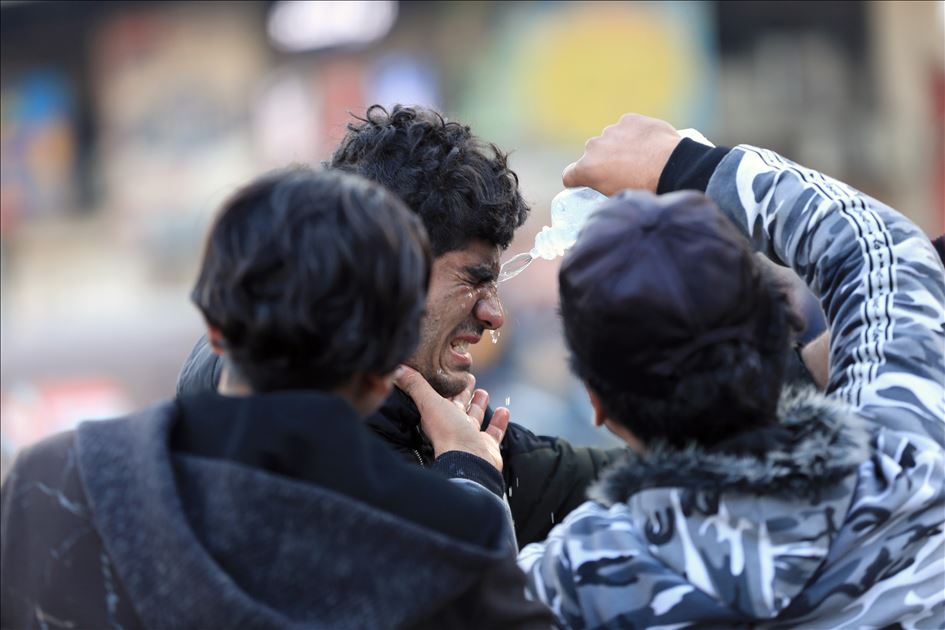 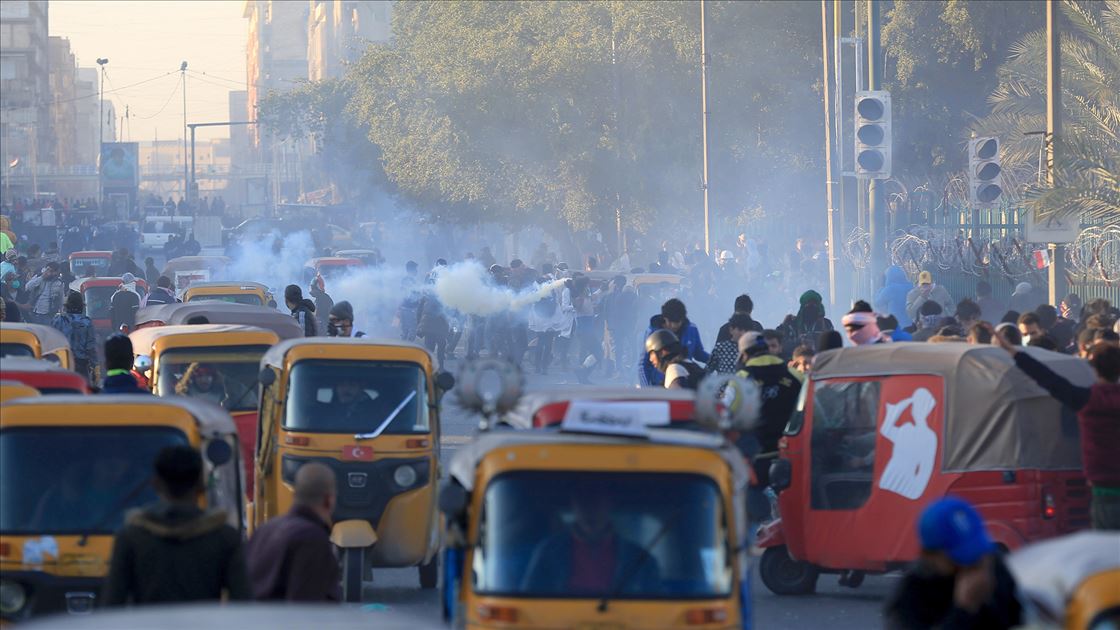 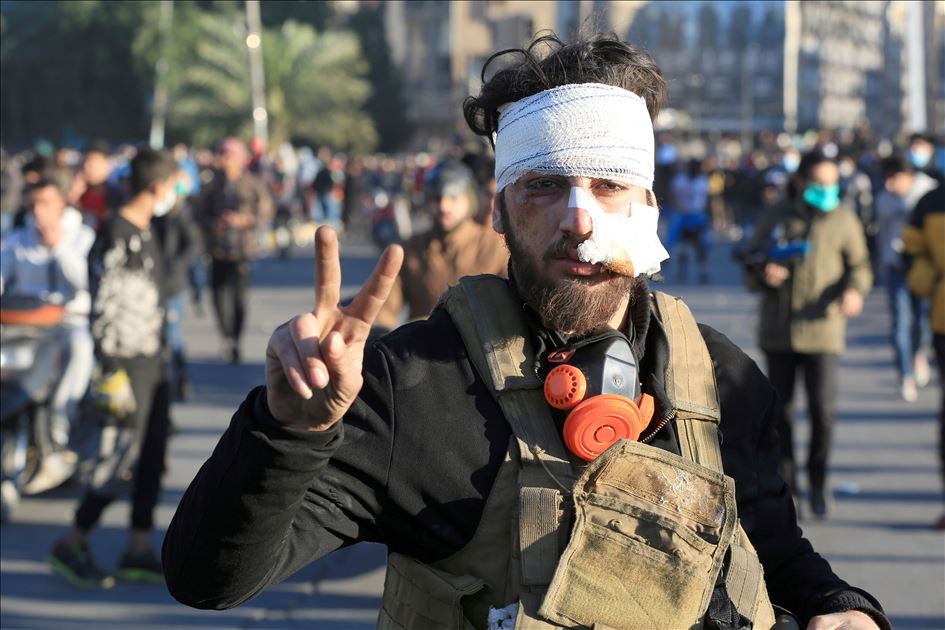