Stevie Wonder I Just Called To Say I Love You

In 1985, the competition for Best Song at the Oscars was intense.


Monday, January 13, 2020.  Democrats vying for the party's presidential
nomination prepare for Tuesday's debate (if they made the cut), Adl
Abdul Mahdi ("outgoing prime minister") made a trip to the KRG on
Saturday, the assassination of two journalists in Iraq on Friday
continues to be news, and much more.

The pool of candidates continues to shrink.  Friday, Marianne Williamson announced she was ending her campaign.

Marianne Williamson‏Verified account @marwilliamson Jan 10
A politics of conscience is still yet possible. And yes….love will prevail.
1,562 replies1,303 retweets11,196 likes


Joe Biden is coming under fire for repeatedly lying about the Iraq War.    Katie Glueck and Thomas Kaplan (NEW YORK TIMES via MORNING CALL) reported yesterday on Joe's continued attempts to lie about his support for the Iraq War:


The vote has exposed him to direct and implicit criticism from his chief
presidential rivals, including Sen. Elizabeth Warren and former Mayor
Pete Buttigieg, a military veteran, and especially Sen. Bernie Sanders,
who voted against the war as a Vermont congressman and whose campaign
has sharpened its criticism of Biden in recent days.

Now, three weeks before the Iowa caucuses — held in a state with a
fierce anti-war streak — the issue threatens to be a campaign liability
for Biden as he seeks to assure voters of his ability to handle a
foreign crisis even as he works to distance himself from a war that has
had enormous costs for his own family, and for the nation.

Bernie, Elizabeth and Pete are all calling him out.

Oh, let's clear something up: US House Rep Tulsi Gabbard hasn't dropped
out of the race yet.  She's just not going to call Joe out.  This
despite insisting she was the anti-war candidate.  Fellow Iraq War vet Adam Kokesh
has long noted how silly it was to pretend Tulsi was anti-war. And we
noted how she failed, at the debate at the end of July, to call out Joe
Biden when handed two chances to do so by moderator Jake Tapper.  She
spent the next three days promoting Joe in interview after interview.

Continuing her campaign of uselessness, Tulsi will be joined tomorrow in
New Hampshire (again, the debate will be in Iowa -- she didn't meet the
criteria to be included) with fellow fake ass Dennis Kucinich.  Oh,
Dennis, run your mouth again while we all pretend you ever back up your
words with action.  I'll never forget Boston, 2004, the convention and
this devoted to Kucinich young woman crying and sobbing because he'd
sold out yet again.  I explained to her then that's all he'd ever do.
Talk a big game and then collapse.  He went on to do it over and over.
Including on ObamaCare, remember?  He wasn't going to vote for it, it
wasn't what we needed.  He said that, then he got on the plane with
Barack Obama and Barack threatened him with funding and campaigning for a
primary opponent to Dennis and Dennis fell in line.  The joke, of
course, is that, as Valerie Jarrett loves to point out, even with Dennis
voting as they told him to, they still primary-ed him and got him out
of Congress.

But Tulsi will do her fake ass act and Dennis will do his and everyone will pretend that they accomplished something.

Joe Biden is not alone, however.  John Kerry is campaigning for him.
Sadly, John didn't get his latest botox done in time and now the two
sides of his face don't match.  Try not to notice it and try not to
fixate on how sad it is that a 76-year-old man is regularly having botox
done.  John, like Joe, supported the Iraq War.  That's partly why he
failed to defeat Bush in 2004.  John's sad career includes a post as
Secretary of State where he repeatedly acted as Secretary of Defense and
accomplished nothing.

That's not fair.  As we've noted many times, when Condi Rice finished up
as Secretary of State, the Dept was in despair.  In a mixed record,
Hillary Clinton can still proudly point out that she brought energy and
enthusiasm to the Dept.  She improved the mood greatly.  Then came
Ichabod Crane Kerry and the mood soured again.  Hey, that's sort of the
effect John Kerry has had on voters as well.

Nina Turner is the national co-chair of Bernie's campaign.  At THE STATE, she notes:

As a recent NBC News headline said of Biden’s time in the Senate: “Biden
didn’t just compromise with segregationists. He fought for their
cause.” The NBC report quoted the NAACP’s legal director saying that one
Biden-backed measure “heaves a brick through the window of school
integration.”

Sanders, by contrast, began his work in politics
by organizing civil rights protests. As a college student, he helped
lead a local chapter of the Congress of Racial Equality in its push to
desegregate housing. Sanders participated in the Rev. Martin Luther King
Jr.’s March on Washington and was arrested for protesting rampant
school segregation in Chicago. In addition, Sanders has been pushing an
education plan that supports local efforts to combat racial segregation.


As a local elected official, Sanders also defied
the political establishment by proudly endorsing Jesse Jackson’s 1988
presidential campaign; Sanders said that Jackson was a candidate “who
has done more than any other candidate in living memory to bring
together the disenfranchised.”

And the contrast between Biden and Sanders continued during the early 1990s.


Read more here: https://www.thestate.com/opinion/article239206718.html#storylink=cpy
In contrast, Sanders vigorously opposed these punitive cuts. “What
welfare reform did, in my view,” Sanders said, “was to go after some of
the weakest and most vulnerable people in this country.”

Elizabeth Warren‏Verified account @ewarren 12h12 hours ago
We need a government and an economy that works for all of us, not just the wealthy and well-connected. In Marshalltown, Iowa, @JulianCastro and I talked about how we can build a country where every single family has the opportunity to thrive. 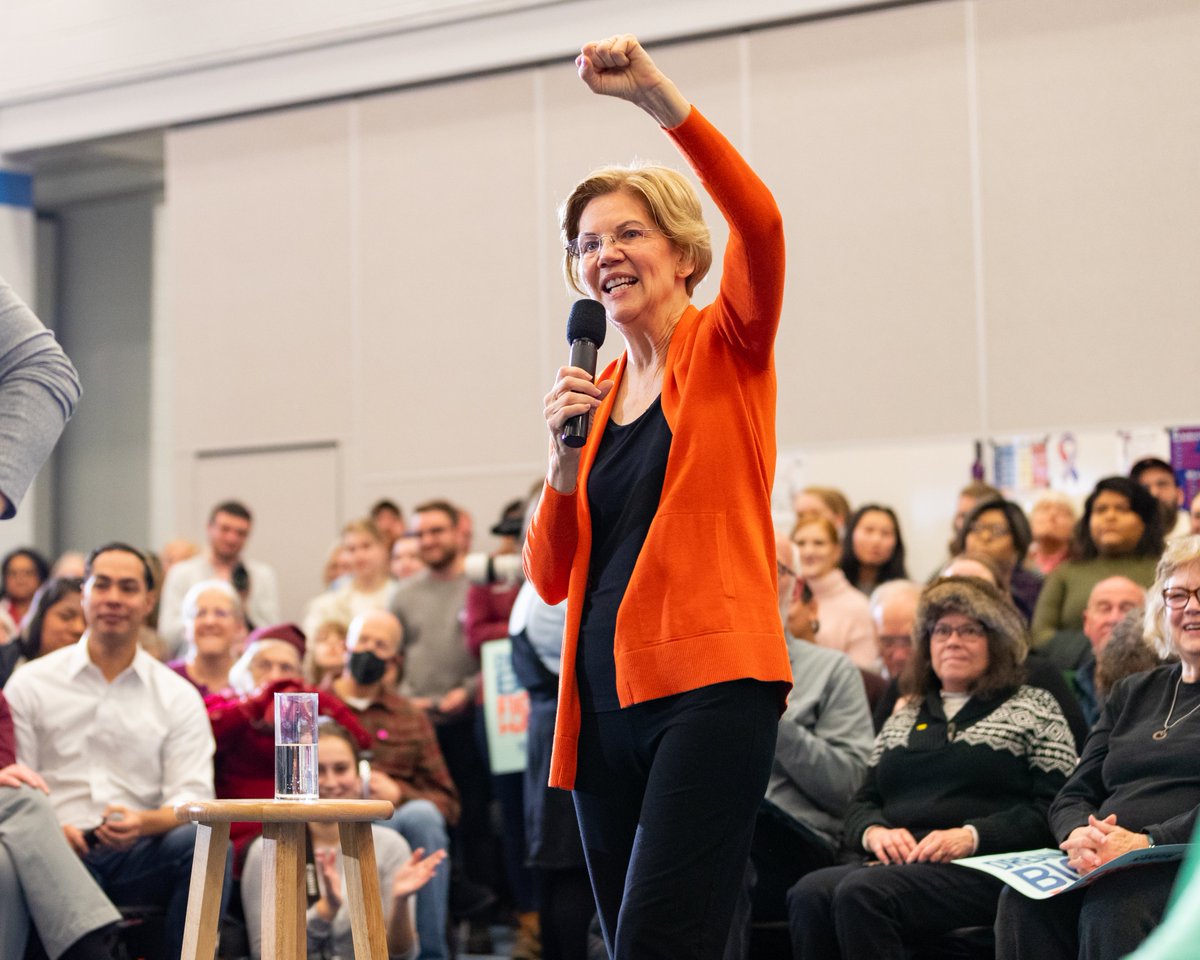 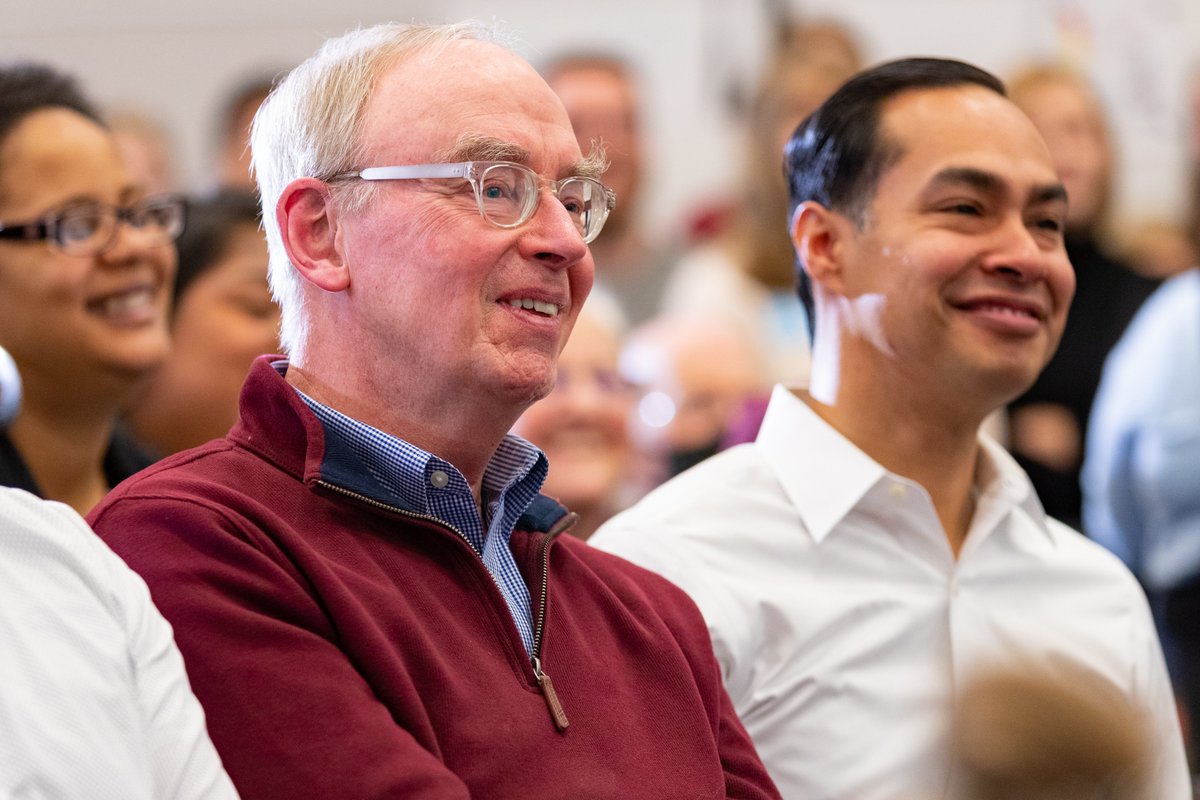 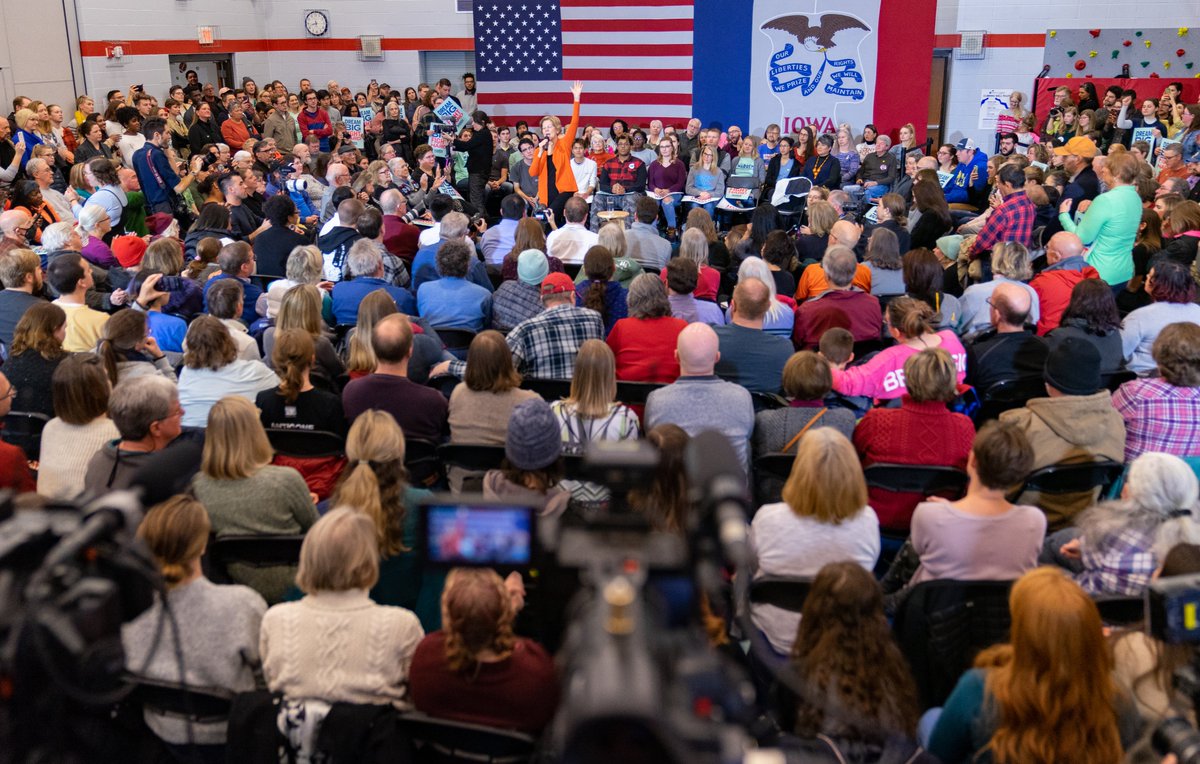 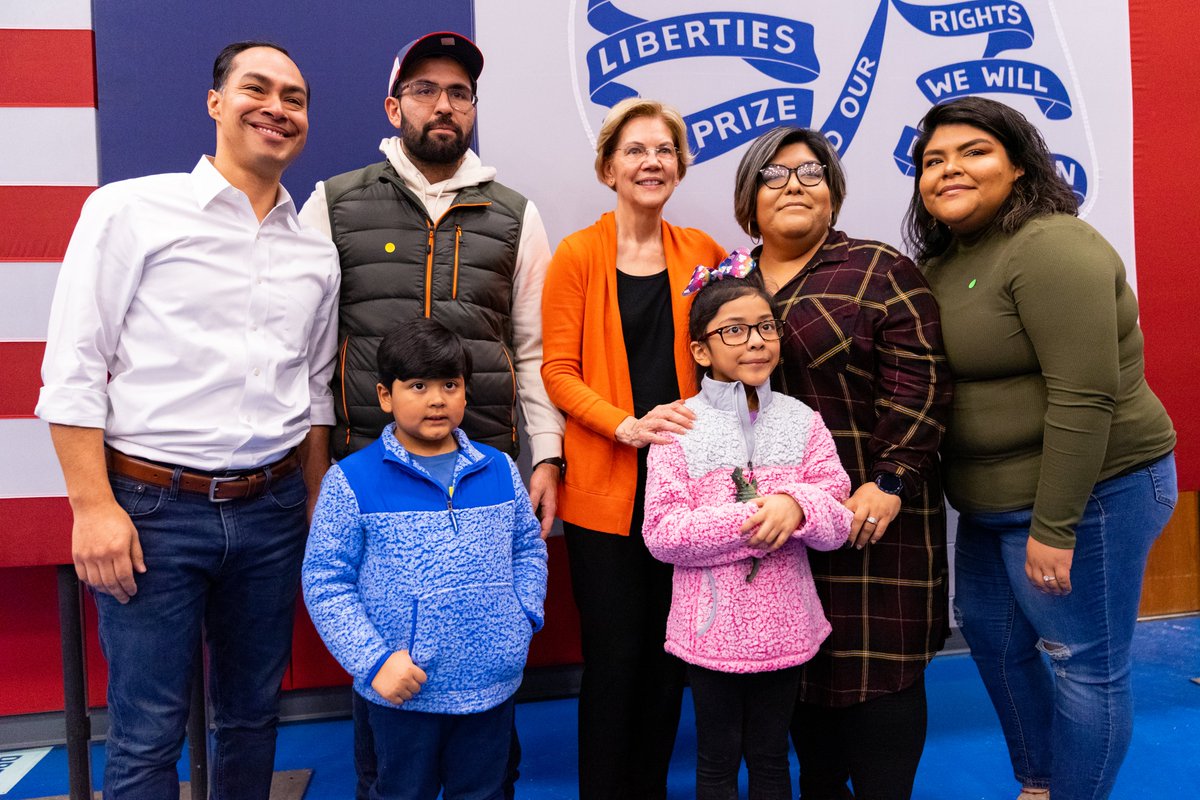 
Julian and Elizabeth address issues and Joe . . .  Well he gets creative
about his Iraq War vote.  David Sirota is the speechwriter for
candidate Bernie Sanders.

David Sirota‏Verified account @davidsirota 12h12 hours ago
Thank you to CNN for being one of the few media outlets willing to point out that #JoeVotedForTheWar and is now trying to "dishonestly" revise history.
24 replies219 retweets693 likes 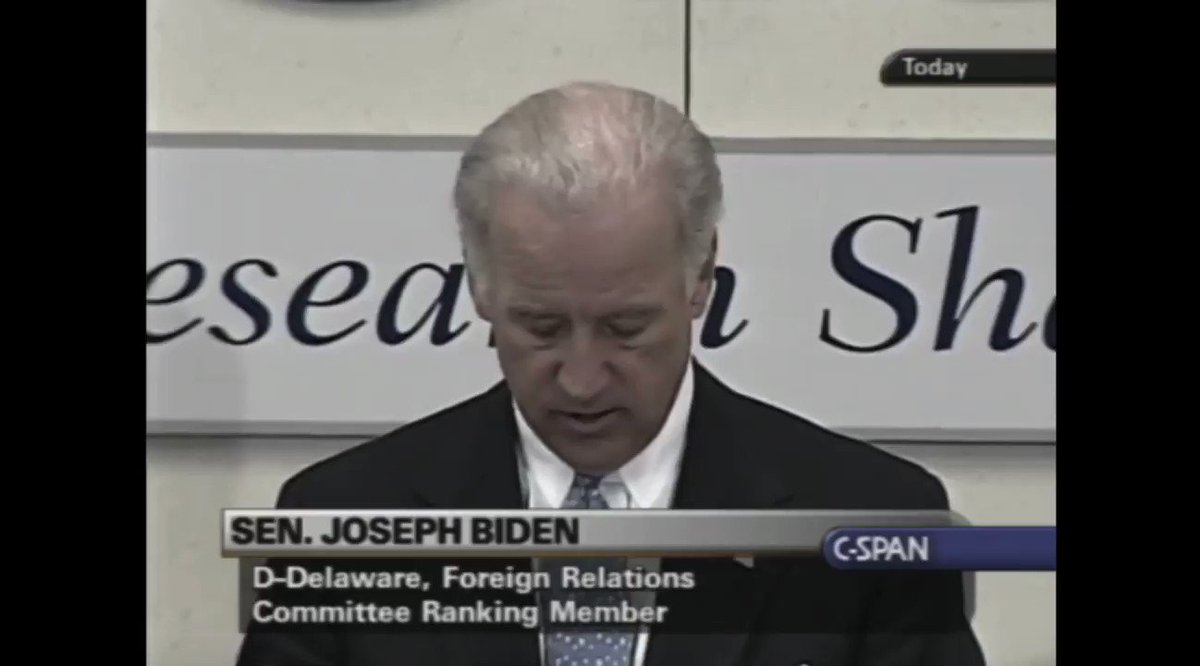 
Brad Polumbo (WASHINGTON EXAMINER) observes, "The facts here are clear. The repeated attempt by Joe Biden and his
surrogates to obfuscate them is deeply unethical, but it’s also
revealing. They clearly know his foreign policy record can’t be defended
on its merits."

Zephyr Teachout‏Verified account @ZephyrTeachout 13h13 hours ago
Zephyr Teachout Retweeted David Sirota
Joe Biden voted for the Iraq war, pushed the war, supported the war after it started. He was adamant. It's on tape.

He is running for Commander in Chief. It matters. Why is he denying his own role?


Let's stay with the topic of Iraq.


I assume Mark Jacob wants US troops out of Iraq.  I know that's what I
want.  I'll assume he's sincere in his opinion expressed above.  But
it's not that simple.  The Parliament vote was boycotted by the bulk of
Sunnis and all Kurds.  That wasn't an expression of the views of the
Parliament.  Adl Abdul Mahdi?  If you don't pay attention to Iraq, he's
the prime minister.  If you do pay attention, he's the man who resigned
last month.  He does not represent the Iraqi people.

If you asked the Iraqi people, they would say, "Out!"  That's what the
protesters are saying.  But in terms of the Parliament or Mahdi, that's
really not that simple.

The KRG, for example, made clear their opinion:
"The meeting viewed the unilateral steps taken by the Iraqi Parliament
on Sunday, January 5, with concern, and saw it as a violation of the
principles of consensus and federal state and considered it a
distabilizing factor to the political stability of Iraq."

I want all US troops out of Iraq.  But I'm not going to lie about what's actually happening.

Over the weekend, this happened. 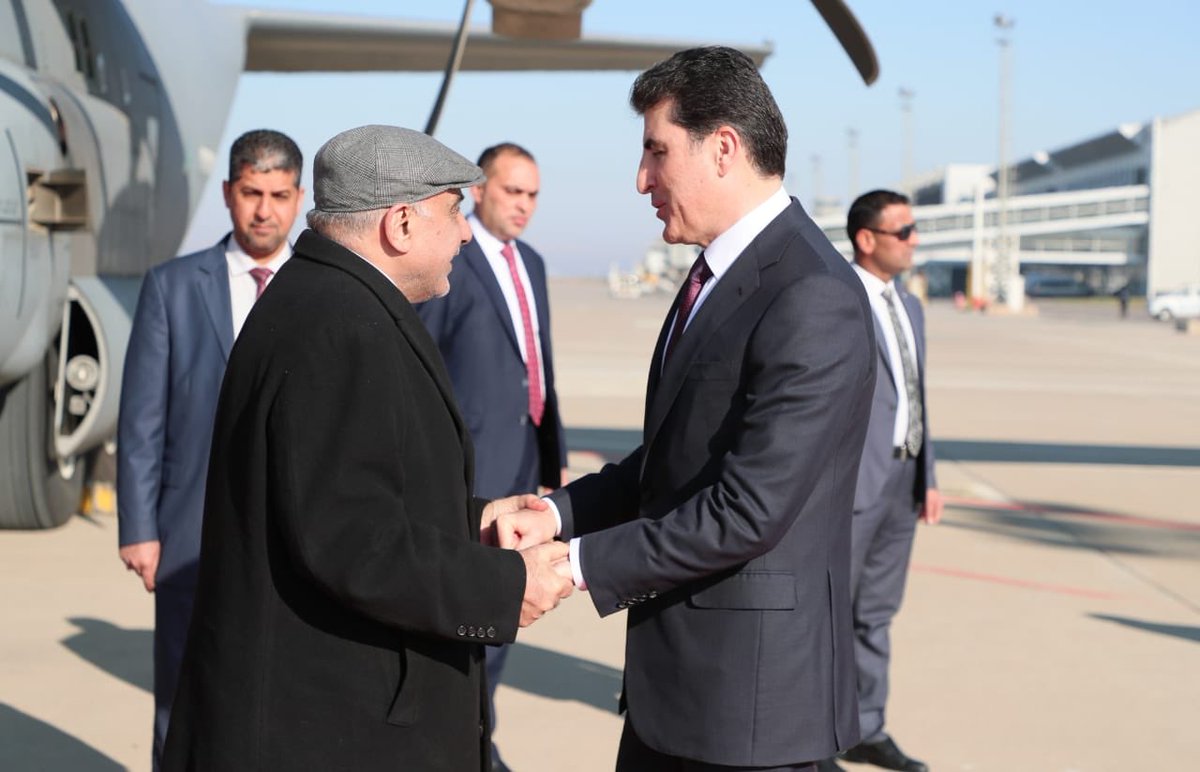 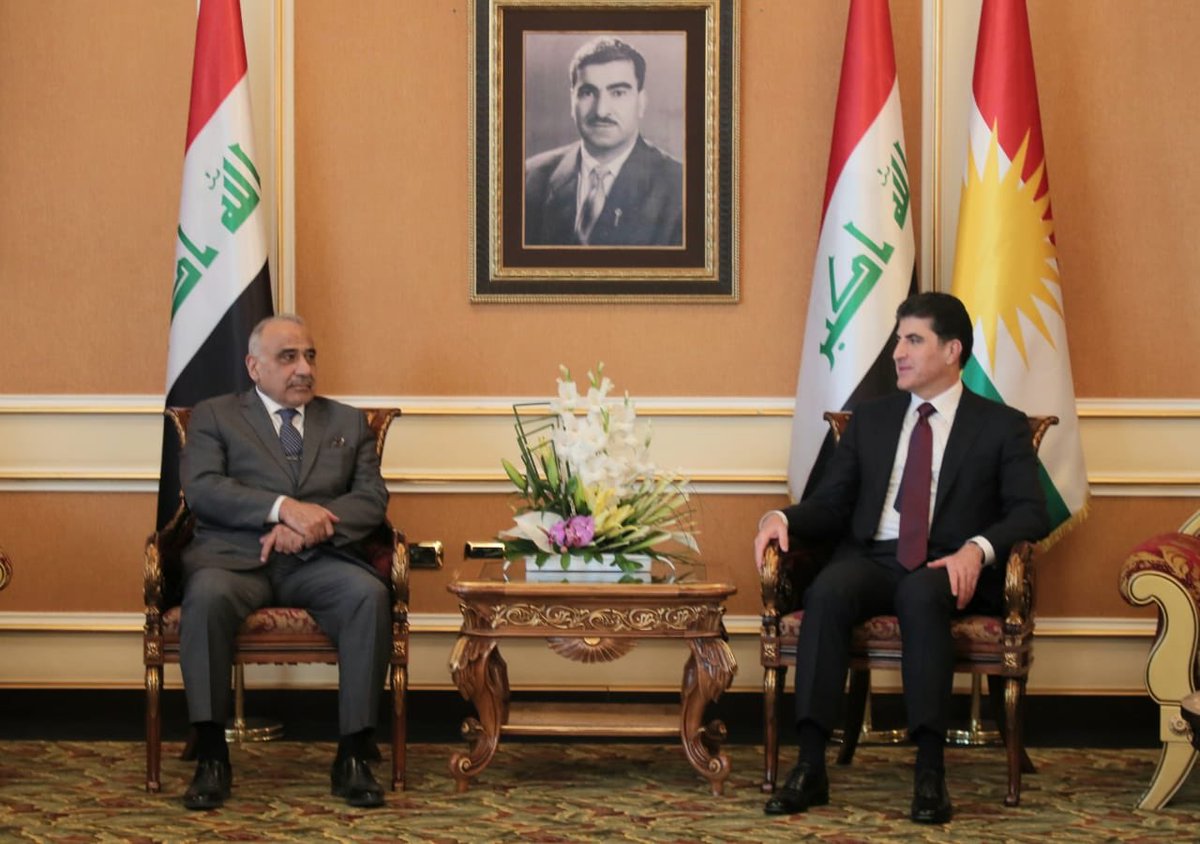 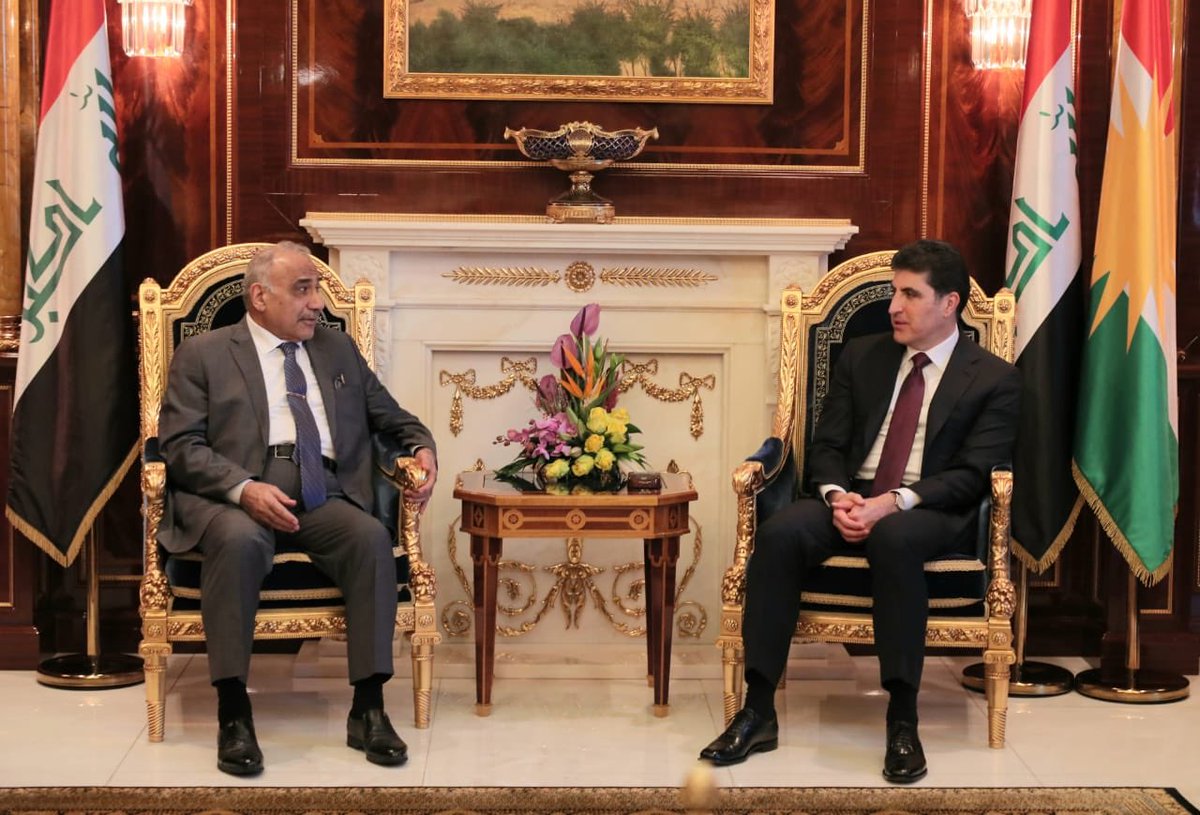 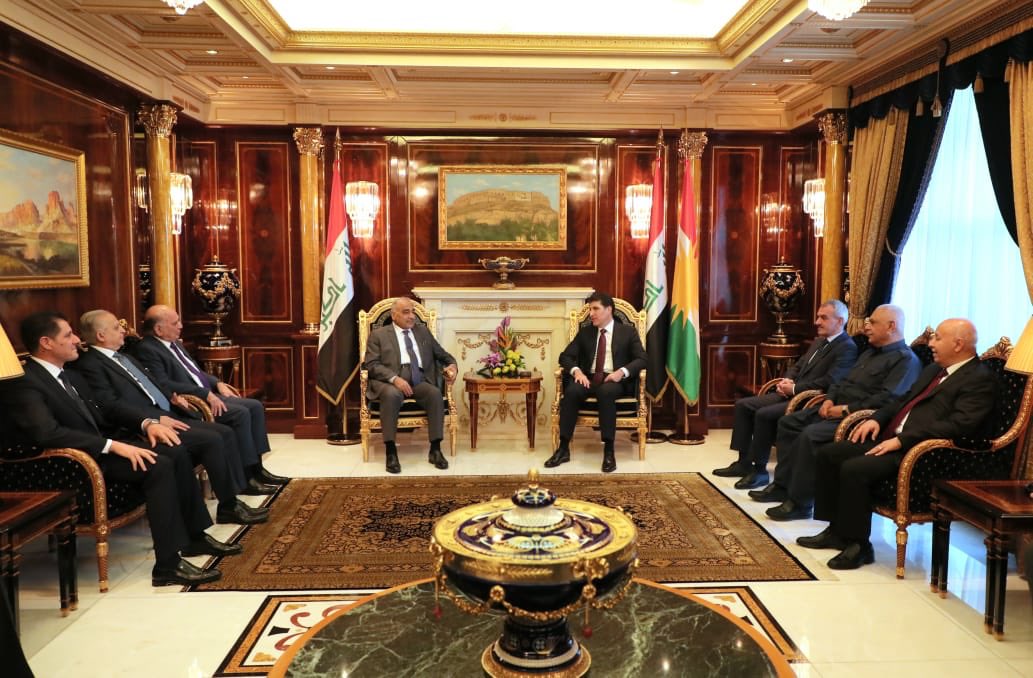 
Let's drop back to Saturday's snapshot about the US government dispatching Assistant Secretary for Near Eastern Affairs David Schenker to the KRG:

I'm noting this is all speculation.  I'm on the phone with two friends
from Barack's administration.  We have been gaming out what may be
taking place in Iraq right now as the US sent an official to Kurdistan
today.  The protesters most significant victory has been forcing prime
minister Adl Abdul Mahdi to resign.

Generally when the US government goes to Kurdistan, they do so to
betray.  So are they trying to rope in Kurdish support for Mahdi to be
prime minister despite resigning?  That would be a huge stab in the back
to the Iraqi people.  He can't continue as prime minister without
significant support and he doesn't have it now.

If the US government brokered a deal with Mahdi for continuing on as
prime minister, what could Mahdi give them?  Continued presence in
Iraq.

Now while the three of us have been speculating on the phone, the second
possibility we discussed at length was this: The US government is
getting permission from the KRG to move US troops there.  It would keep
US troops in northern Iraq despite the objections from Baghdad.  I've
noted before this week that the KRG shielded Iraqi Vice President Tareq
al-Hashemi from Baghdad when thug Nouri al-Maliki was lying that Tareq
was a terrorist.  Under the same semi-autonomy, they could house all the
troops currently in Iraq in the KRG.  What would happen to the KRG if
they did this?

Baghdad would withhold monies.  Could the US government to replace those
monies?  Absolutely and Baghdad would also be forced -- by various laws
in place -- to eventually resume paying the monies owed to the KRG.

Now that's our speculation on two possible reasons for today's meet-up.
There could be any number of reasons -- and none that would threaten
the Iraqi people.  But based on what's going on currently and the US
government's past history, those are the two possibilities that seem
most likely.

Mahdi went to the KRG.  He was seeking something, otherwise, he would have made them come to him.

Yasir Jarad‏ @YasirJarad 57m57 minutes ago
Yasir Jarad Retweeted عثمان المختار
Children of journalist Ahmed Abdul Samad, who was assassinated by the pro-Iran militias, standing in front of their father’s picture in Basrah! 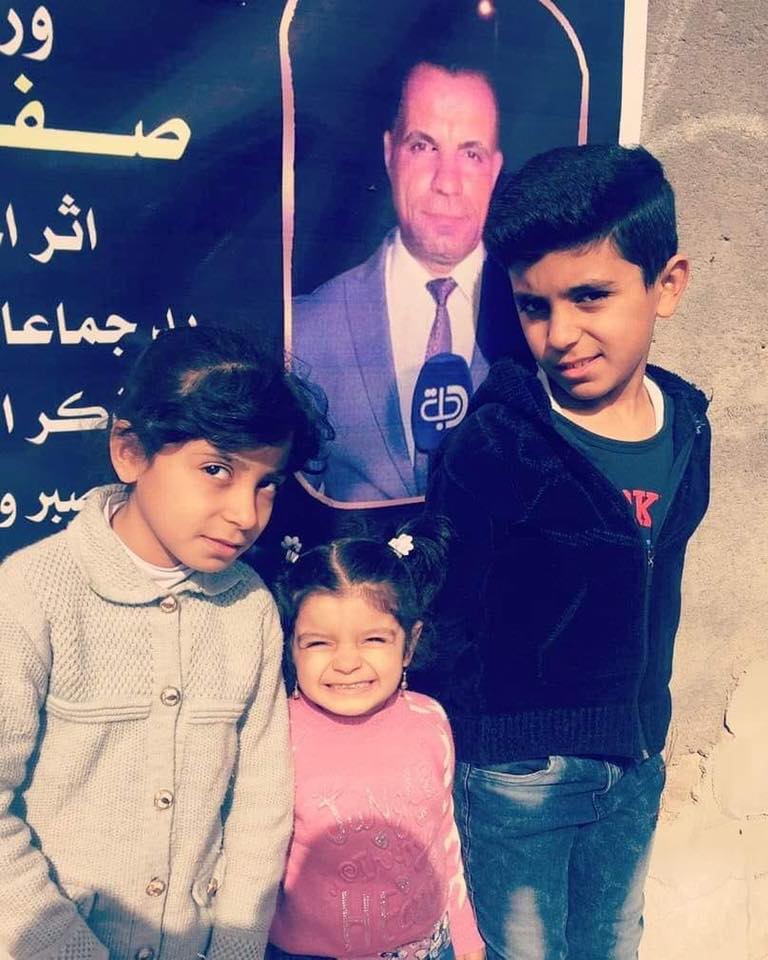 
Journalists  Ahmed Abdul Samad and Safaa Ghali were killed Friday for covering the protests.  We've noted that in:


In a show of solidarity with Abdelsamad and Ghali, a
group of journalists in Baghdad on Saturday held a vigil near the Iraqi
Journalists Syndicate building to mourn the death of the two reporters.
"We are here in solidarity with our colleagues Safaa
and Ahmed and to express our sincere condolences and rejection of what
has happened to them," said Laith Natiq.
"We condemn the violation of press freedoms in Iraq and the way [armed groups] are trying to keep us silent," he said,
Natiq said although it was unclear who was behind the
killings, he suspected they were groups who want to keep the
journalists silent.