An e-mail from Chris T asks if I really intend to not cover the James Webb Space Telescope?
Yes, I do intend to ignore it.
I've also scaled back on NASA coverage as a result of it.
Had this telescope been named in the 90s, I would support efforts to change the name but would probably cover it.  But the telescope was named in current times.  Despite protests and known issues, NASA went ahead and named it after the well known homophobe in 2021.  That is unacceptable.  Clarence Thomas' concurring opinion in DOBBS makes it clear that the there is very real threat to equality.  NASA has elected to honor James Webb, I do not have the same need.
Robyn White (NEWSWEEK) reports on an Artic shark who has surfaced far from home:

Researchers discovered the rare, deep water sleeper shark lurking in waters in a coral reef in Belize, according to a study conducted by Florida International University.

While the exact species of sleeper shark remains unknown, researchers believe it's "most likely a Greenland shark, or a hybrid between the Greenland shark and the Pacific sleeper shark," the study said.
This is the first ever record of this type of shark in the western Caribbean region.
This is WFLA reporting on the same shark:

A half-blind shark usually found in freezing Arctic waters, where scientists say their lifespans can surpass 500 years, was recently discovered in the Caribbean, according to Mote Marine Laboratory & Aquarium.

Devanshi Kasana, a Ph.D. candidate at the Florida International University, was working with local fishermen in Belize to tag tiger sharks when the team encountered something they had never seen before.

As the team did a last check of their fishing lines, they found something that they weren’t expecting.

“On the other end of one, wasn't a tiger shark, but a rather sluggish creature. It looked old - ancient, even - and more like an elongated, smooth stone that had sprung to life, according to an FIU news release. “It had a blunt snout and small pale bluish colored eyes. All together, these clues led scientists to think it was a member of the sleeper shark family.”

Think about it, we'll come back to it.

Should we do a new feature?  TODAY'S IDIOT?  THE DAILY IDIOT would probably be a better title but I can't imagine having to deal with the nonsense of Lauren Boebert and Marjorie Taylor Greene on a daily basis. And it would be a daily basis because crazy takes no holiday.  If you missed it, the two women took time off from bullying a gay Canadian man on Twitter to mock US Vice President Kamala Harris.  Bully and hag Lauren finds it hilarious that Kamala introduced herself at a meeting.  This is what Bully Hag Lauren Tweeted:
Kamala Harris just introduced herself with she/her pronouns at an official event, She then clarified that she was a 'woman' sitting at the table wearing a blue suit. This is what happens when your speechwriter quits and you hang around with Geriatric Joe too long.
Maybe Bully Hag Lauren could focus on legislating and not try comedy?  For comedy to work -- pay attention, Lauren -- it needs more than an insult.  It needs grounding in truth.
Did Kamala do something shocking?
No.
Here's the White House's official read out of the Tuesday event:

Vice President Harris discussed how disparities in health care access continue to exist in our country for people with disabilities, and she conveyed that those challenges are being exacerbated following the Supreme Court overturning Roe v. Wade. The participants shared stories of challenges that are disproportionately facing people with disabilities as it relates to reproductive health care and abortion access.

Vice President Harris emphasized the Administration’s commitment to protecting reproductive rights and shared how the Administration will continue to fight for the bodily autonomy and self-determination of all individuals with disabilities. The participants discussed how there is significant work to be done to fulfill the promise of the Americans with Disabilities Act, and Vice President Harris thanked them for their leadership in shining a spotlight on the need for equity and access. She spoke about the importance of coalition-building in the movement to protect reproductive care for all people.

I don't see a thing wrong with what Kamala did.  What Lauren fails to grasp is that the meeting most likely had observers and that some of those may have needed verbal comments to participate fully.  I've  noted before that I've been at Congressional hearings and ended up signing for someone I've noticed present.  (They do make accommodations at Congressional hearings but they need to know ahead of time.)  In addition, there are people who need transcripts -- audio and video don't work for them -- due to challenges or disabilities.  For the record, it would probably be smart for all of us to do what Kamala did at any meeting -- for the meeting itself and for any record (written, visual, audio, what have you) of the meeting.   I'll publicly applaud Kamala for her actions.
It's something, isn't it, to watch The Bully Hag Lauren get upset whenever anyone tries to be welcoming to all.  Apparently, in Lauren's world only some Americas -- 5%? -- are worthy of rights and dignity.  Lauren is and remains TODAY'S IDIOT.  That does, of course, explain how she dresses and her attempt to hide skin flaws by caking on make up.  It also explains how Lauren acts this way while maintaining that one day she'll get into heaven and how she wrongly believes she's exhibiting heavenly behavior here on earth.

In the US we call it what it is: A riot.  In fairness, a number of idiots -- mainly in media -- call it a coup or an attempted one.  In the US, we even launch a media-geared Congressional investigation.

But in Iraq, when Moqtada al-Sadr orders his goons to take over Parliament, they're just "protesters" and "demonstrators" -- read the press, that's what they're calling them.

Hundreds of followers of Shia cleric Moqtada al-Sadr broke into the Iraqi Parliament building in central Baghdad to protest against the nomination of Mohammed Shia' al-Sudani for the post of Prime Minister.

The riot police fired tear gas canisters and warning shots to disperse the protesters, but there were no clashes between the protesters and the security forces, an Interior Ministry source told Xinhua news agency.

Prime Minister Mustafa al-Kadhimi urged in a statement the protesters to withdraw from the building immediately.

Al-Sadr told the demonstrators to end the protest in a tweet late Wednesday night, saying "your message has arrived... Go back to your homes safely".

They broke into the building on Moqtada's orders and didn't leave until he told them the message had been delivered and to go home?

It was a riot in a federal building and it was planned by, instigated by and overseen by Moqtada al-Sadr.

CNN, you can't have it both ways though goodness knows you try to "Hundreds of angry protesters . . ."

albawaba.com
US Capitol Riots vs. Iraqi Parliament Protest, Similar or Different? | Al Bawaba
Since videos of Iraqi protesters invading the parliament in the Green Zone, Baghdad on Wednesday night, social media users have started to compare the i
5:17 AM · Jul 28, 2022

Hundreds.  Apparently, even the cult was reluctant to show for this action.  Friday is a day of worship in Iraq.  So when Moqtada's cult comes out after Friday service, they're really not doing much at all but the international press always pumps them up.  On  a regular week day he can't even turn out thousands.

It's been nine months (almost ten) since Iraq held elections.  Still no prime minister or president has been named.  Moqtada failed repeatedly to form a government before finally throwing in the towel -- which is always his m.o. -- a few weeks ago.

Maybe his cult should have been storming his headquarters months ago?

Nouri al-Maliki After the Sadrist protesters withdrew from the Green Zone, maybe that al-Maliki wants to show Muqtada al-Sadr that he is ready for any fight!! 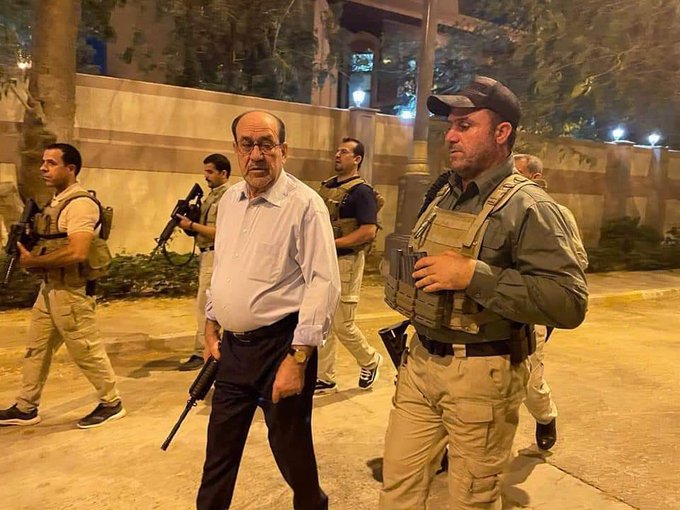 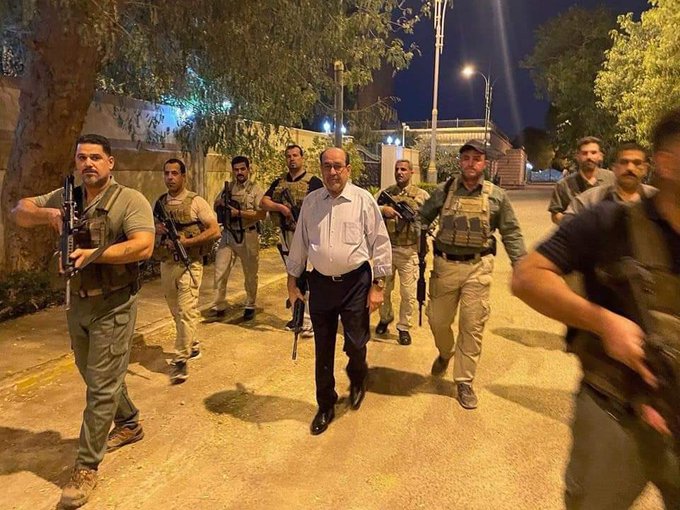 Former prime minister and forever thug Nouri hits the streets with a gun after the Parliament is occupied.

The move was described by Iraqi analysts as an attempt by Iraqi leader Moqtada al-Sadr to block the path of his rival, former Prime Minister Nuri al-Maliki, or any of his allies, to head the government.

Sudani is closely linked to Maliki.

Well-informed Iraqi sources tell The Arab Weekly that Sadr fears the repercussions that his movement might suffer from the premiership of any figure who is loyal to Maliki.

Such repercussions might include the dismantling of the Sadrist security and political apparatus and the sidelining of Sadrists in government and curtailing their financial clout.

By sending his supporters en masse onto the streets, Sadr seems intent on avoiding his past mistakes dealing with Maliki. Sadrists have not waited long to apply intense street pressure on their movement's main rival with whom they see the showdown as an existential battle.

The Sadrists remember the operation launched by the Maliki government in March 2008 against the Mahdi Army militia led by Moqtada al-Sadr. The fighting at that time lasted nearly three weeks and ended with the surrender of the Mahdi Army and the defeat of Sadr.

What has further fuelled the Sadrists’ fears were the most recent audio leaks of statements by Maliki, in which he hints at a internecine Shia war to eliminate Sadr whom he describes as ignorant, spiteful and bloodthirsty. “He is a coward who robbed the country”, Maliki is heard saying about Sadr.

Let's turn back to the US and wind down with this from Jacob Crosse (WSWS):

As of this writing, 28 women have filed federal civil rights lawsuits alleging they were assaulted, raped and harassed at the Clark County Jail, located in southern Jefferson County, Indiana, last October during a “night of terror” overseen by indifferent and paid off prison guards.

In the lawsuits, the first of which was filed by 20 inmates in June, the second which was filed by eight more inmates this past Monday, the women allege that former corrections Officer David Lowe provided keys to at least one male inmate which allowed him and several other prisoners, under the watchful eye of Clark County jail officers, to enter the female pods beginning the night of October 23, 2021 and into early hours of October 24.

The lawsuit alleges that for over two hours jail security staff did nothing to stop the male inmates from going into the female pods and harassing, intimidating, assaulting and raping the female prisoners. The lawsuit alleges that despite the security cameras working and several security officers on duty, male inmates, with their faces covered, were allowed to freely enter the women’s cells and go on a rampage.

“Amazingly, even though there were surveillance cameras positioned in locations that showed the male detainees accessing the women’s Pods, and even though the incident involved multiple male detainees and dozens of victims over an extended period of time, not a single jail officer on duty that night came to the aid of the Plaintiffs and the other victims,” the most recent lawsuit states.

One of the plaintiffs in the federal lawsuit, known as Jane Doe 1, alleged that “multiple male detainees using the keys obtained from Lowe, entered Pod 4 (E) where they raped, assaulted, harassed, and intimidated Jane Doe 1, resulting in significant emotional and physical injuries, including but not limited to nightmares, bleeding, vaginal tears, and genital herpes.” The lawsuit says that multiple prisoners held her in place and told her to “keep quiet” while one inmate raped her.

Several other plaintiffs alleged similar injuries. While at least 28 women have come forward, one of the lawyers involved in the lawsuits says that there are more victims.