People are believing it -- is it true?

This topic was all anyone could talk about at work today:

Laird Wilcox‏ @LairdMWilcox  7h7 hours ago
#STEVEN_PADDOCK IS A REGISTERED #DEMOCRAT -- A MEMBER OF THE #DEMOCRATIC_PARTY. Almost certainly voted for #BARACK_OBAMA and #HILLARY_CLINTON. The people he killed and wounded were mostly #DONALD_TRUMP supporters. Think about this. RETWEET THIS NOW! 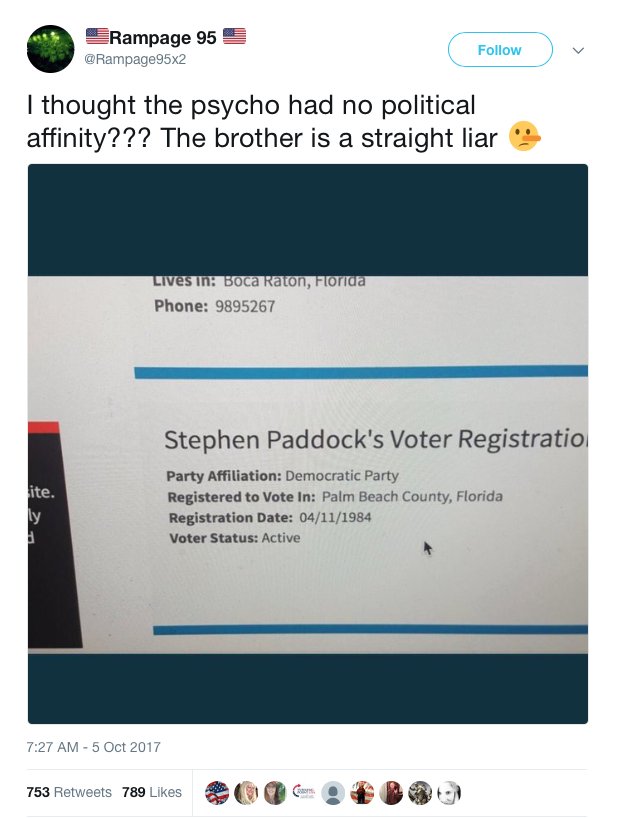 I have no idea.

But it looks pretty true.

And my co-workers are convinced it was.

I kept saying "might be true" and "may be true" -- and I'm saying that in this post.

If it's true, it needs to be included immediately in all reporting.

If not, it needs to be loudly rejected.

Friday, October 6, 2017.  The Iraq War is not ending and that was clear in a Congressional hearing this week.


"I remain concerned that without significant post-conflict planning and resourcing we will find ourselves and Iraqi condemned to fighting the same battles so many have already given their lives for in the past," declared US House Rep Seth Moulton earlier this week.

He was speaking Tuesday afternoon at a House Armed Services Subommittee hearing.  The Subcommittee is the Oversight and Investigations and Moulton is the Ranking Member and an Iraq War veteran.

The hearing was regarding a post-ISIS world.

Or that's what it was supposed to be.

It was actually a hearing about forever war.

US House Rep Seth Moulton: At its core, what troubles Iraq are fundamentally political questions.  Just as I disagreed with the Obama administration I am again concerned that this new administration is not significantly prioritizing such underlying political dynamics.


The first panel featured two-time Ambassador to Iraq Ryan Crocker, Marc Lynch (of George Washington University -- and also famous for his blogging and his analysis -- the latter frequently at FOREIGN POLICY) and Kenneth Pollack who's finally left Brookings and stopped pretending he was a centrist.  In fact, Pollack's move to the right-wing American Enterprise Institute may qualify as the only significant movement taking place during the 14 years of the ongoing Iraq War.

And still no end in sight.

And yet people seem willing to accept this as normal.

14 years and where do things stand today?


US House Rep Seth Moulton: First and foremost, I'm concerned that Iraqi security forces may be woefully unprepared to provide security to Iraqi civilians and ensure displaced persons can return to their homes without attack or fear of retribution.  Experts I have heard from here in Washington and in Iraq have expressed worries of insufficient hold forces and police compounded by the beleaguered state of Iraqi military units reeling from the toil of the brutal counter-ISIS campaign. Without sufficient local security arrangements, we cannot expect for Iraq to be stabilized, for civilians to return to normalcy and for communities to be defended against the emergence of a "ISIS 2.0" or other militant groups. Moreover, without capable and professional security forces, we risk seeing a repeat of the same sectarian tensions leading to Sunni embitterment that provided fertile ground for the growth of ISIS in the first place. Beyond the provisioning of civilian security, key gaps and problems remain to be addressed -- such as acute food insecurity, insufficient access to healthcare, destroyed infrastructure, degraded public services and utility, newly inflamed grievances among local communities and insufficient plans for government arrangements in many areas.


14 years, millions of lives lost and billions of dollars spent and that counts as progress?

That is what the world has to show for the Iraq War?


US House Rep Seth Moulton:  Why is it worth the United States effort to put in 10,000 troops even if their effort is mainly political?  Why is it worth the effort of the State Dept resources and aid and development resources to build up the Iraqi state?  We've been there a long time and many Americans are asking why don't we just pull out and go home? And Ambassador Crocker, you referred to this a little bit in your introduction, but just explain to the American people why this investment is worthwhile and why now is the right time to make it?  Ambassador Crocker, you're welcome to start. Thank you.

Ambassador Ryan Crocker:  Uh, thank you, Congressman Moulton.  What-what we are seeing in the region, potentially in Iraq, is not just the overthrow of regimes but the collapse of states. And, sadly, when states collapse, other forces will fill the void. Uhm, as we have seen.  I would, uh, call it a failure of governance throughout the region.  Modern Middle East is about 100 years old and that time, that chronic failure of governance, has led to crisis after crisis  and I would argue has brought the region to the point it's at today -- which is deeply dangerous not only for the region but for the world  including ourselves.  So there is a fundamental choice here -- either we continue as we've been doing -- in which case I think you are going to see Islamic State 2.0 -- as the Islamic State was al Qaeda in Iraq 2.0.  That is not in our interest -- anymore than watching Afghanistan spiral down in the 90s -- again, the rise of the Taliban and 9-11.   Congressman, I have heard much in my career about a failure of intelligence leading to this or that -- there's some truth in it. But it's not the whole truth.  I call it a failure of imagination -- that we cannot imagine how bad things can get -- we couldn't imagine that --


That's enough from him.

Does Ryan Crocker ever admit reality?

Tuesday, I sat through a hearing of Ryan Crocker insisting the US must remain in Iraq.

Excuse me, Tuesday, I again sat through a hearing of Ryan Crocker insisting the US must remain in Iraq.


Why are we listening to recommendations from Ryan Crocker?

After all this time, why are we still listening?

It was a flashback to a week in April of 2008 when The Crocker and Petraeus Variety Hour took place and we had to attend hearing after hearing in the House and Senate as Crocker and David Petraeus sold failure as 'success' and insisted the US had to remain in Iraq.  It was a week when 20 US service members were announced dead in Iraq -- not that the media ever made that connection.  They were too busy falling at the feet of Croker and Petraeus (especially the latter).

Oh, please, they've been peddling it for years, decades.

And they peddled it that week and repeatedly distorted and denied reality.

For example, Crocker was repeatedly setting "forth a vision, to use his words, of our relationship with Iraq" (his words, as Joe Biden would point out).

Yet on April 10, 2008, this man supposedly arguing a vision (continued war was all he was arguing for), was asked by US House Rep Ellen Tauscher about withdrawal from Iraq because, as she noted, "we will have a new president on January 20" 2009 and Crocker responded, the man there to present the vision of Iraq's future, "That's looking fairly far into the future, uh ,and I've, uh, learned to keep my timelines short when it uh comes to do with things in Iraq."

He was arguing for endless war.

And he's still doing that.

And, no offense, but Lynch, Pollack and Crocker have all been wrong -- infamously wrong -- on Iraq.  Why the hell are they still being invited as alleged experts?

They may have skills when it comes to analysis -- Lynch and Crocker have both shown skill there -- but that doesn't translate into forecasting.  They've made recommendations that have repeatedly been faulty.

And yet there they were again.

The most important hearing during the week of The Crocker and Petraeus Variety Hour was the one that neither 'celebrity' attended.  It took place April 10, 2008 and was chaired by then-Senator Joe Biden:


Biden spoke of how US Ambassador Ryan Crocker told the committee on Tuesday that this was about setting "forth a vision, to use his words, of our relationship with Iraq" but "one of the problems . . . is the vision this administrations shares for Iraq is not shared by two of the thee" current candidates for president in the Democratic and Republican Parties -- referring to Senators Hillary Clinton and Barack Obama.  Biden noted that those appearing before Congress keep stating that the agreements "aren't binding to us but, in Iraq, they think we mean it . . . because otherwise we wouldn't be having this kind of discussion."  Biden noted the "internal threat" aspect being proposed and how these requires the US "to support the Iraqi government in its battle with all 'outlaw groups' -- that's a pretty expansive commitment."  He noted that it requires the US "to take sides in Iraq's civil war" and that "there is no Iraqi government that we know of that will be in place a year from now -- half the government has walked out."


"Just understand my frustration," Biden explained.  "We want to normalize a government that really doesn't exist."

And Crocker's still advocating to normalize a government that really doesn't exist.

Modern Middle East is about 100 years old and that time, that chronic failure of governance, has led to crisis after crisis  and I would argue has brought the region to the point it's at today -- which is deeply dangerous not only for the region but for the world  including ourselves.


If the crises have been deeply dangerous for the region and the world, maybe the UK and the US should have butted out long ago because it is the wars they have started in the Middle East for the last 100 years that has led to chronic failure.

Crocker can't admit that.  He can't even admit that a 14 year war -- an ongoing war -- that has nothing to brag about is the very definition of a failure.

Former Prime Minister of Iraq Nouri al-Maliki is thus far the sole nominee to the chairmanship of the Shia National Alliance bloc in the Iraqi Parliament, according to an Iraqi lawmaker.
Huda Sajjad, a lawmaker from Maliki's faction within the State of Law coalition, told local Iraqi news outlets on Tuesday that the current Vice-President of Iraq is the only candidate nominated as next chairman of the Shia National Alliance.
[. . .]
Maliki was the Iraqi Premier from 2006 until Sep. 2014. He is known as a close ally of Iran.
He has repeatedly been criticized for being involved in widespread corruption, his failed policies, and contributing to the rise of the Islamic State (IS) in mid-2014.

Even though a reading of the Iraqi Constitution argues that's not legal.

He wants that even though he once swore he'd never seek it (but then went on to seek it in 2014 but was overruled by Barack Obama).

And he may return.

Hayder al-Abadi, the current prime minister, is just Nouri-lite.  (Though Lynch painted him as ineffectual but a good person in the hearing, the reality is that al-Abadi persecutes the Sunnis in the same way Nouri did.)

One example for today, Jalal Talabani, a two-term president of Iraq, passed away.  Today was his funeral.


Even something as basic as attending a funeral becomes a schism because of Hayder.


Going back to Tuesday's hearing one more time.

US House Rep Seth Moulton:  I cannot tell you how painful it is as an Iraq War veteran to see us fighting and re-fighting the same battles we fought and for which so many of our friends gave their lives.  At this rate, my children will be fighting these very same battles. We must hear from this administration how this time will be different, how this time you will ensure a political resolution so that the US military doesn't have to keep coming back and cleaning up the mess every time Iraqi politics falls apart.


Saturday, there's a protest in NYC: 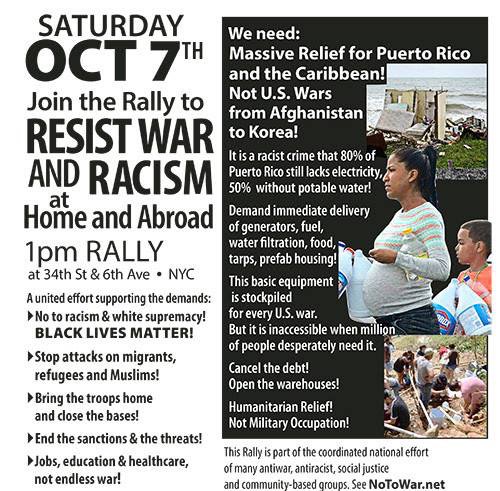 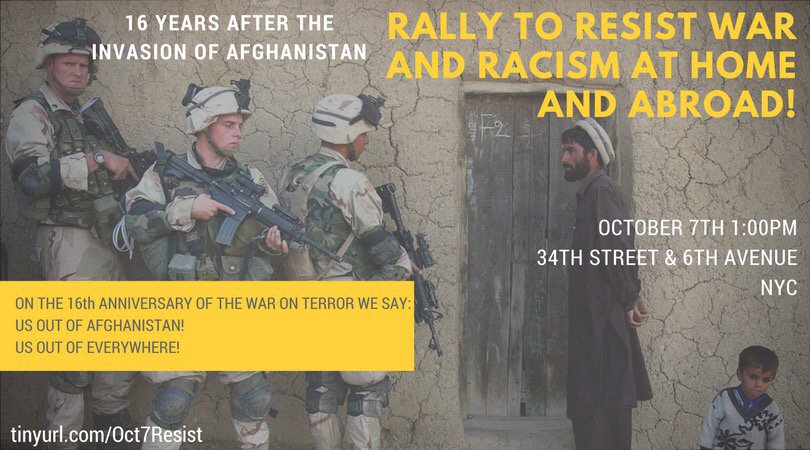 Black Alliance 4  ✌🏿‏ @Blacks4Peace  22h22 hours ago
Here's what BAP's been up to this week. Please RT! blackallianceforpeace.com/newsletter/oct… 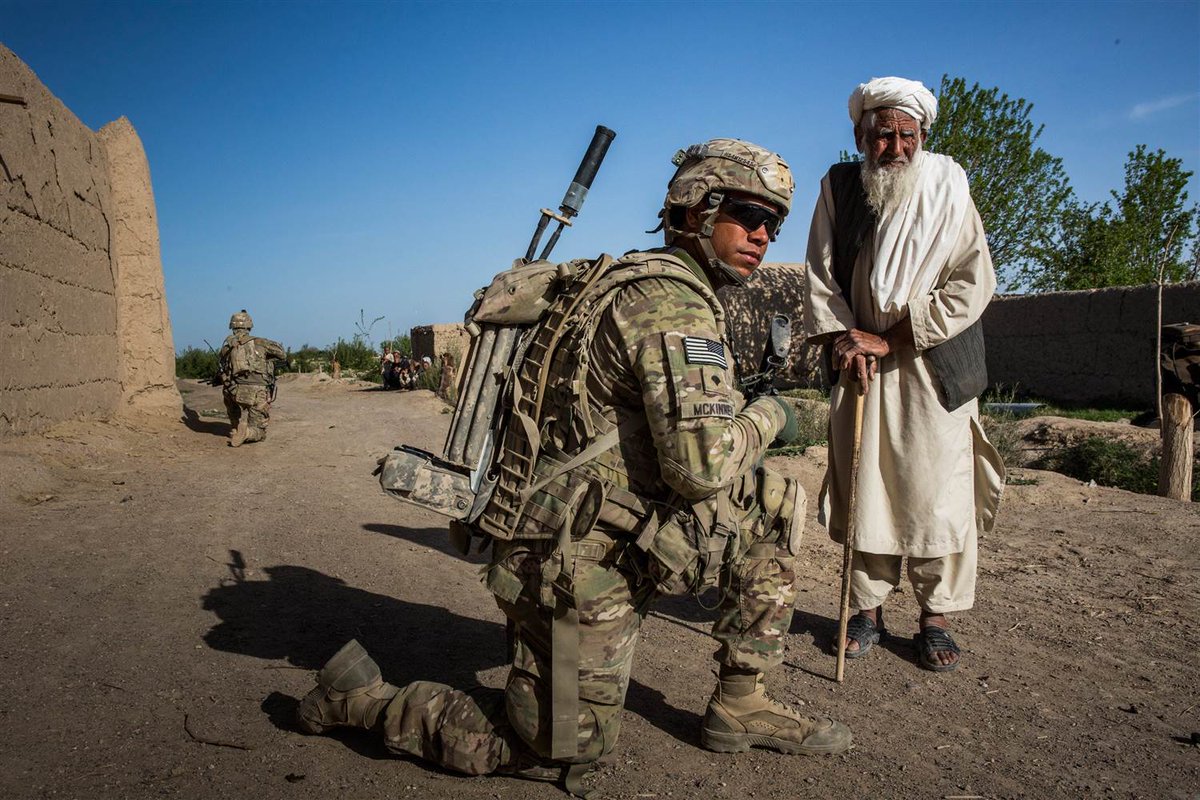